For those early arrivals meet at Bere Ferrers Station around 2.30pm for a mid afternoon walk alone the Calstock Incline and some Brake Van rides, plus lunch in the nearby pub.

We are planning to hold our AGM at PAR Station Pub around Midday and then afterwards catch train to Newquay with members having the option to stay in Newquay or alternatively to catch another train to Luxulayan for a Valley Walk.

Sunday (Only scheduled day with bus or coach booked)

Meet at Plymouth Station at 11am with hire bus/coach to take us to the Plym Valley Railway we will then move onto Callington & Kelly Bray (terminus of PD & SWJR) before our coach takes us onto Launceston for a ride on the 2ft gauge railway. Our return journey will take in the sights back to Plymouth travelling across Dartmouth.

Each Member attending will be given an itinerary which will include refreshment breaks & lunch places and suggested times, as well train times and bus or coach times for the Sunday, costs are still to be worked out. (Pricing to follow)

Some members that had said they thought that Sundays timings were well off and that they did not think we would be able to visit all the places on the day. Well Chris Groves has checked the following times of service bus schedules with stops & deviations to & from our proposed destinations for comparison and they are as follows;

No 12 on Sundays from Plymouth Station to Launceston takes 75 minutes.

No 117 on weekday from Launceston to Tavistock takes 35 minutes.

No 1 on Sundays from Tavistock to Plymouth takes 60 minutes.

This gives members ideas of the times as our bus will be only stopping at our visiting points, they will be less than above.

Below Chris has outlined the prices for network train travel to give members an idea of costs, we will purchase our own tickets on the days.;-

Train fares o/p in D&C are very cheap, the maximum price for a Ride Cornwall Day Ranger, covering Gunnislake to Plymouth and all lines west to Penzance including buses is £13.00 or £10.75 with a railcard. Plymouth to Newquay day return is £10.30 before railcard discount of 30% (this is all at 2018 prices).

For those who don’t want a full day on Sunday we can include the option of having done the Plym Valley of joining the vintage bus & alighting at Saltash having passed alongside the RAB around 13.00 with frequent 7 no. bus stage services back into Plymouth.

Similarly those who only wish to join the afternoon jaunt to Launceston could join us around the same time having made their own way by bus to Saltash.

(it may need a subsidy if there are insufficient numbers?) and for the other activities I would suggest the following:

...allow around £24 this will depend on numbers though.

TOTAL COST (INCLUDING ESTIMATED COST OF BUS)=£60.00 [please note this could go up or down according to numbers)-also that there will be additional train fares to and from whereever you are staying and the pickup points.

I trust the foregoing gives some further insight into the proposed itinery and costs and if you require anything further at this stage please don’t hesitate to let me know....Dana

ps we are not going to Gunnislake on Sunday though there is an option that if anybody hasn’t by then travelled the branch (late arrivals) there is time for them to catch the 09.10 from Plymouth for a return trip before the bus jaunt leaves from Plymouth for PVR at 11.00.

I believed we asked that the amounts be paid in full by a certain date say 31/03/19, or secured places by a non-refundable deposit, sorry I cannot remember which or both? (D.W.)

Members will recall that a survey form was included in the spring issue of The Colonel. The intention was to help planning the future development of the Colonel Stephens Railway Museum at Tenterden.  The concept was prompted by the thought that members of our society, committed as they are to perpetuating the memory of Holman F Stephens and his works, would be more likely than most to participate enthusiastically in such a survey. If successful, it might have been the prototype for a bigger survey in the future.

When the survey closed on 26th April (we continued, a bit like the Referendum website to accept entries for a little while after the announced deadline), we had received 31responses. The total membership at that point was 392, so the percentage return was only 7.9 – rather disappointing, given that all members had to do was to fill in a simple form and post it (admittedly with their own stamp). Alternatively, those with the appropriate equipment could have scanned it, completed it and sent it in without further ado.

The first question asked whether the member had visited the Museum and, if so,

Plans to visit in the future were the subject of the second question. Members were asked if they expected to visit during 2016, in the following 5 years, never or never again. It was also possible to answer ‘don’t know’.  Eight members (26%) planned to visit this year and 12 (39%) within the following 5 years. Encouragingly, no one said they did not intend to visit or visit again. However 11 said that they did not know.

Reasons for not visiting

One member said that the fact that the Museum closed during the winter was the reason.  It was pleasing that no one cited lack of interest. Distances from Tenterden included Guernsey, Ludlow, Cardiff and Peterborough. Those who lived nearer cited mobility problems. While one said that the lack of a good west to east road from West Sussex to Kent, coupled with his age, limited his visits. Another said: “I was favourably impressed with the Museum, though I find Colonel Stephens and his doings historically fascinating, the K&ES is not one of my favourite preserved lines. Frankly I’m not a big fan of Kent.” Ah, well!

How good are the displays

Those who had visited the Museum were asked to rate on a scale of 1-5 (1= high, 5 = low) how well they thought the displays in the Museum present the story of the life of Colonel Stephens and his railways. 17 (63%) gave them the highest rating, 7 (26%) rated them at 2, while one rated them at 3 and another one rated them at only 4. None gave the lowest rating. One said that it was thoughtfully laid out. Another said: “ Love the Museum, nearly always buy a railway book from the foyer. I joined the Colonel Stephens Society after seeing the Museum. Keep developing it and keep selling books.” Another rated it as 2 on the grounds that “there is always room for improvement”. One member said: “Good on some lines, but not all”. True, but that reflects what we’ve been able to collect.

Are you willing to help?

The final question asked members if they were interested in helping the Museum and, if so, what they would be able to help with.  Fifteen replied that they would not. All of them cited distance as the limiting factor. Disappointingly, nine did not answer this one.  However two said they would be willing to help if ways could be found to do so remotely.  There was one big success; one member did volunteer to help and has since been recruited as a Museum Attendant. Another took the initiative to send an email to ‘Broadcasting House’, the BBC Radio 4 Sunday morning programme, to nominate the Museum to feature in the small museums series they were running. So far, they haven’t taken up the idea.

So, overall there was a disappointing response rate, but those who did respond seemed to rate the museum highly, even though many could not visit often or volunteer to help. Well, it was worth a try.

I would like to acknowledge the help of Peter Southgate in preparation of this report. Because of the low response rate and the small numbers involved please treat the percentages with a pinch of salt. Admission to the Museum is now free to all, so you can bring friends and family – even if they don’t have much time. Researchers can make use of the archives and extensive photographic collection on application to Brian Janes, the Curator. The Museum is always keen to acquire more artefacts, documents and photographs that relate to the Colonel and the railways associated with him. Contact the museum at; Tenterden Town station, Station Road, Tenterden, Kent TN30 6HE o1580 765155 www.hfstephens-museum.org.uk

30 YEARS OF CELEBRATING THE WORK OF

The 30th anniversary of the birth of the Colonel Stephens Society was marked during our now traditional Members’ Weekend in May.  We usually visit a railway with a strong connection with the Colonel. This year we toured the route of the long-closed North Devon & Cornwall Junction Railway, which once ran between Halwill Junction and Torrington, stopping off at points of interest, including the remains of several stations and halts. It was the last railway engineered by the Colonel, opening in 1925 and operated by the Southern Railway. Regular passenger services were withdrawn in 1965.

To mark our anniversary, we decided to award founder member, Jon Clarke, Honorary Membership, only the third such award in the Society’s history.

Over the years, we have made modest donations to several projects to preserve and restore relics of the lines of the light railway pioneer Colonel Holman F Stephens. This year, at the Society’s AGM held in Barnstaple, a decision was made to contribute towards the re-creation, by Colin Shutt, of a Ford rail lorry as once used on the Colonel’s Shropshire & Montgomeryshire Railway.

We spent the following day at the Lynton & Barnstaple Railway. Members were so impressed with the restoration work that, although the line was not directly associated with the Colonel, the committee decided at a special meeting held on the platform at Chelfham to make a contribution to the cost of making new doors for the station.

A photographic record of the weekend appears on our website at:

We have contributed to a number of restoration projects, including:

•The restoration of a Ryde Pier Drewry tram

•The re-creation of a Ford railmotor

•The restoration of KESR’s Terrier No.3 Bodiam

•The restoration of the Welsh Highland Heritage Railway’s Russell

Colonel Holman Fred Stephens was born in 1868 and died in 1931, while resident at the Lord Warden Hotel, Dover.  He was a promoter, engineer, locomotive superintendent and director of light railways. He was connected in one or more of these capacities with 17 such railways, both standard and narrow gauge, in England and Wales. His office was in Tonbridge, Kent. 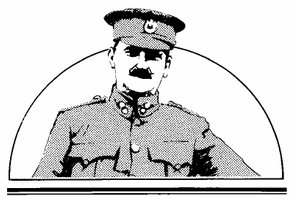 The latest issue of 'Heritage Railway' (No.192, published on 31st July), includes a 2-page article on the Selsey Tramway, by Geoff Courtney, who seems to have 'discovered' it while on holiday! The four photos are all very familiar, but it's nice to see this line featured. 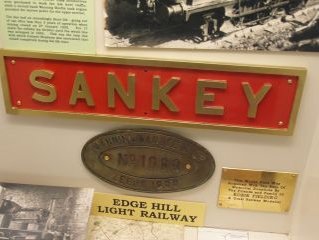 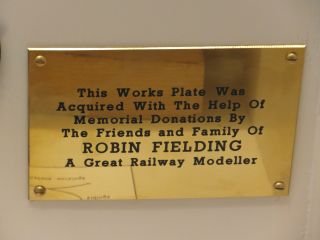 was the CSR Museum. The money was put towards the purchase of a works plate from 'Sankey' of

Here is a picture of the plate and the plaque.

The Colonel Stephens Railway Museum is seeking to acquire, by purchase or long term loan, a Tyer's No.7 electric tablet instrument as used for single-line working.

The museum is not interested in acquiring the much more common Tyer's No.6.

If you have a No.7, or know where one might be available, please contact Philip Shaw at