This Steam And Things kit is for a 4-wheel coach (standard gauge) that was built by Messrs Brown Marshalls of Birmingham for a South American Railway. Delivery never took place, and instead they went to the Lambourn Valley Railway in 1898. The latter was taken over by the GWR in 1905 and the coaches went over to The (Hundred of Manhood and) Selsey Tramways in 1910. There they were put to good use, but then eventually rotted away in a siding (along with a greater proportion of HMST stock) to be finally scrapped about 1935.

There were 3 types, 12 droplight (2 off), 11 droplight and 7 droplight and they all went to the HMST except for the 7 droplight which was reputedly scrapped at Swindon after initialy being sold to the Alexandra Docks Railway in South Wales. 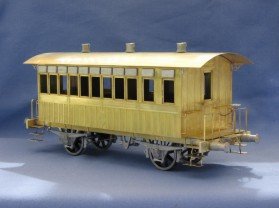 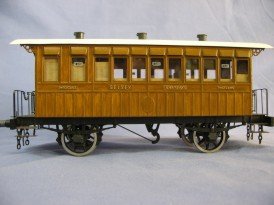