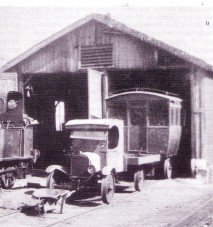 This is one of those prototypes about which little is known. It is reputed to have been used by Colonel Stephens as an inspection lorry travelling by road between his various railways, but at the same time carried a set of rail wheels for traveling along the tracks. It arrived at the Selsey Tramway about the same time as the Wolseley Siddeley Railmotor and reputedly was coupled back to back with that unit for a time. At some later stage it was transferred to the Shrophshire and Montgomershire Railway where it was reunited with the Wolseley, but the latter was no longer a railmotor, but a trailer. The trailer was made by mounting the Wolseley body an old four wheel tram car chassis.