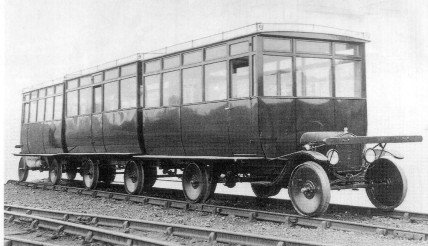 A photograph Shropshire and Montgomeryshire three car set was published in the local Chichester newspaper, with the caption that this set was to be delivered to the Selsey Tramways, but of course a two car set was delivered to that railway.

This S&M set was built by Messrs. Edmonds of Thetford, Norfolk, and delivered as a 3-car set to Shrewsbury in 1923. There are believed to have been very few photographs of the complete 3-car unit at work. There have been suggestions that the motor units were not powerful enough in service, but then again see next paragraph!

Interestingly there is a photograph of the S&M central (unpowered) passenger trailer at the Selsey on the back siding, in the middle of a group of derelict stock. However, there are no known photographs of the central trailer in use on the Selsey. Though - who is to say it was not used at either location.

This set looked very similar, if not identical to the Selsey 2-car Ford set, with the only immediate noticeable difference being the flush sides and ends of the S&M set, as opposed to the panelled version of the Selsey set. Like the Selsey set, this unit had it's own baggage trailer, which replaced the passenger trailer.

Passenger services on the S&M ceased in 1933, but the cars were not broken up until possibly the early 1940s, with last occasional use being in 1937.