Another reconstruction job by the Colonel, this time of the 6-mile, 3ft gauge Torrington & Marland Mineral Tramway. He also extended the route to a total of 20½ miles between Torrington, the terminus of an LSWR branch from Barnstaple, and Halwill Junction on the LSWR Okehampton-Bude line. It opened in 1925 and was run by the Southern Railway. Closure to passengers came in 1965 and to all traffic in 1982.

The North Devon and Cornwall Junction Light Railway was a railway built to serve numerous china clay pits that lay in the space between the London and South Western Railway's Torrington branch, an extension of the North Devon Railway group, and Halwill, an important rural junction on the North Cornwall Railway and its Okehampton to Bude Line.

China clay was an important mineral but its weight and bulk required efficient transportation; the material had been brought to main line railways by a 3-feet gauge tramway. Expanding volumes prompted conversion to a light railway -- requiring less complex engineering and operational procedures than a full railway -- and it was opened on 27th July1925.

Passengers were carried in addition to the mineral traffic, but the business largely consisted of workers at the china clay pits themselves. The largest place on the railway was Hatherleigh a market town in the centre of a barren countryside, it is badly decayed.

The conversion from a tramway was overseen by Colonel Stephens, the famous owner and operator of marginal English and Welsh railways. Although in construction details typically Stephens this was visually a Southern Railway branch line. It survived in independent status until nationalisation of the railways in 1948, and continued in operation until 1st March1965. The northern part from Marland, reconstructed from the narrow gauge railway, continued to carry china clay, but not passengers, until 1982.

Built as cheaply as possible, and partly following the alignment of the former tramway, the railway had continuous sharp curves and ruling gradients in the range of 1 in 45 to 1 in 50. 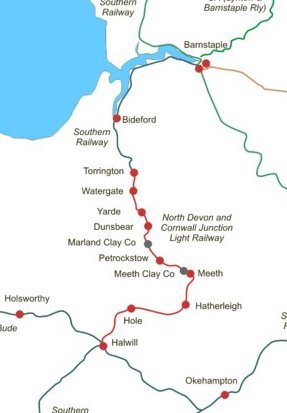 The stations on the line were:- 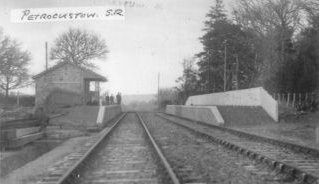 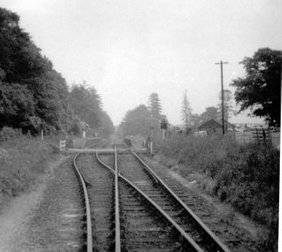 Several proposals for a railway between Bideford, or Torrington, and Okehampton came to nothing during the eighteenth century but in 1909 Holman Fred Stephens, of light railway fame, suggested using the T&MR as part of a route for a standard gauge line, extending from Torrington to Halwill Junction, on the London & South Western Railway's Bude and North Cornwall lines. Like many others at this time, he saw economically built and operated light railways as the means to cheap rural transport. The line was authorised in 1914 but the Great War intervened. Plans were revived in 1919 but the cost had more than doubled and local authorities as well as the Treasury had to agree to support the line financially.

The first sod was cut in 1922 but work was slow. Unemployed men had been shipped in for construction but lacked either skills or willingness, and in June 1923 rowdiness turned to a fairly nasty fracas when two policemen held off a mob of 30 or 40. In 1925 the contractor became bankrupt and Colonel Stephens, as he now was, took over construction personally. The line was completed and opened without formality on 27 July 1925, being operated by the Southern Railway as the successors to the L&SWR.

It was not a great success. The clay traffic used it but there was not a great deal of agricultural traffic while passengers found the stations too inconvenient. Hatherleigh, the principal town served, was only eight miles from Okehampton by road but over twenty by rail.

The new railway did encourage a new clay works at Meeth which, like Marland, could only function with good transport. The Meeth (North Devon) Clay Company commenced in 1920 and laid a two-feet gauge line from their works at Woolladon to the ND&CJLR. Later they worked pits closer to the railway but the narrow gauge survived until 1970.

Apart from clay, all goods facilities on the ND&CJLR were withdrawn on 7 September 1964 and the passenger service went from 1 March 1965. At the same time the line south of Meeth, to Halwill Junction, was closed and lifted. Clay traffic continued for some years but never recovered fully after a rail drivers strike in the 1970s, as the clay companies had turned to road and were unwilling to invest in modern railway wagons. Total closure came in March 1983. The line has been lifted and much of the route is now a foot and cycle path. Clay is still extracted but now without the benefit of rail transport.