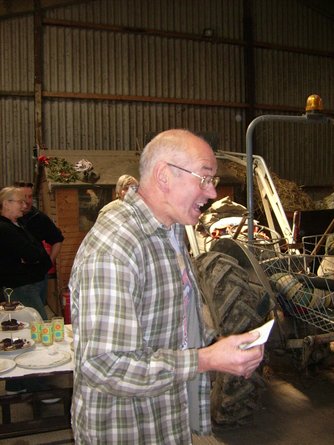 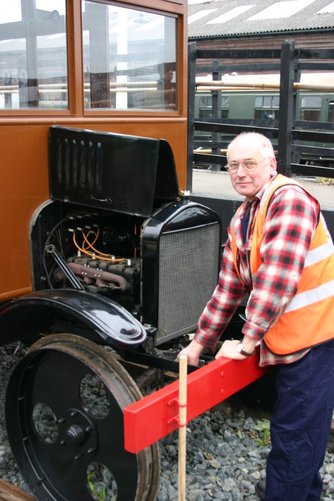 Back to Home Page

The film opens with a still of Colin driving his railmotor on a visit to the Derwent Valley Railway in 2006. A peek into the interior of the vehicle follows showing the spartan nature of the seats and controls.

We next see Colin in May 2007 starting the Ford (remember starting handles?) in Rolvenden Yard, where the maintenance and overhaul of the K&ESR locomotives takes place. He had brought his railmotor to Tenterden from his home in Yorkshire for the Colonel Stephens Society’s Members’ Weekend. Once started the railmotor backs out onto the running line. (The original railmotors usually ran back-to-back so that the driving position was always at the front.) Colin’s replica consists of one car only. Although described as a replica, the chassis is a genuine 1926 Ford model T, while the Colin built the body to represent the real thing”.

Some of the home fleet of locomotives are glimpsed. It stops alongside visiting LNER J15 no. 65467. The railmotor looks rather frail by comparison with the main line engine. It then runs into the platform line. Colin waits patiently for the level crossing gates to be opened. Once across the road, the Ford is faced with the steep incline up into Tenterden Town station. Officially described as 1in50 but increasing to 1in36 at its steepest. To the surprise of some, the railmotor tackled it with ease.

There’s another wait for the Station Road level crossing to be opened. Once through, it runs into the platform road at Tenterden Town. Colin is asked ‘How did it go?’ He replies that the engine had to be cooled down a bit after the shunting to and fro to get it out of Rolvenden yard and onto the running line. Then there was ‘no trouble at all’ climbing the bank into Tenterden.

Colin asks; ‘How far to go?’ He is guided to the end of the platform, passing the class 108 Diesel Multiple Unit. A class 08 diesel shunter is stabled blocking the line ahead. The points are changed so that it can back into the ‘pullman dock’ ready to provide shuttle rides the next day.

The film rounds off with some still shots of Colin, including one of him in his workshop. He gifted the railmotor to the Colonel Stephens Railway Museum via the Colonel Stephens Society just before his untimely death in 2016. We see it in the final still shot taken as it arrived at Tenterden in June 2017, shepherded by Kerry Baylis.

Note: The origin of this film is unknown, unfortunately. The Society and the Museum would like to know who the photographer is so that their work can be acknowledged. If you know the answer, please contact the Curator at the Colonel Stephens Railway Museum, Station Road, Tenterden, TN306HE.Bruce Hunt has edited the film and it now stands as a fitting tribute the late Colin Shutt, who built the replica, so that we can have some idea of what it was like to travel in what was, in the 1920s, a novel form of rail transport.

Colin’s replica can be seen in its bespoke shelter outside the Colonel Stephens Railway Museum at Tenterden.