In the early decades of the last century, Colonel Stephens engineered, built and managed a unique empire of branch line railways up and down the country. They were built and run on a shoestring, mostly in accordance with the Light Railways Act of 1896. Each had its particular character as well as a distinctive family likeness that included remote locations, second-hand rolling stock and, towards the end of their often brief lives, a down-at-heel charm. They have always attracted the interest of railway enthusiasts, and now there is a society dedicated to feeding and exploring that enthusiasm. 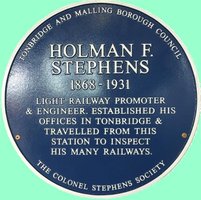