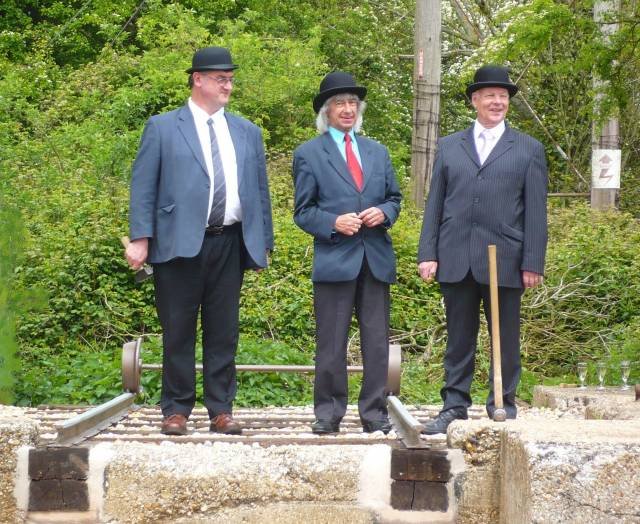 (Sussex Industrial Archaeology Society) get ready to drive in the spikes.(RS) 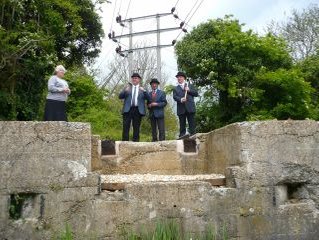 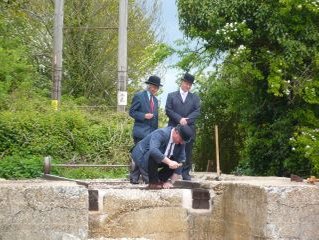 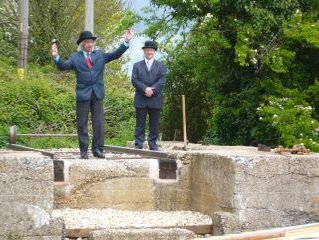 The Official Opening of the newly-laid track on the Tramway Bridge abutment at Hunston on the old Selsey Tramway took place on Bank Holiday Monday, 4th May 2009. It was organised by the Sussex Industrial Archaeology Society (SIAS) in conjunction with the Chichester Ship Canal Trust (CSCT). A marquee had been set up in the field adjacent to Hunston Jetty. In addition to the Colonel Stephens Society stand, there were displays by the SIAS, the CSCT, the local Ffestiniog Railway group and a 7mm/ft scale diorama featuring a working model of Hunston lifting bridge. Built by Ian Hellyer, the rolling stock included a superbly constructed and painted Agenoria kit of  Selsey and two of Robert Kosmider’s ex-LambournValley 4-wheel carriage kits.

The 50-seat canal boat Richmond, arrived at the jetty and John Blackwell (chairman of the SIAS) alighted to join John Mills (Senior Archaeologist of West Sussex County council) and Laurie Cooksey  Wearing bowler hats for the occasion, the official party was driven by Linda Wilkinson (Chairman of the CSCT) to the northern abutment of the former lifting bridge. On the southern bank some 70  locals had gathered to witness the event. The 30ft length of original Selsey Tramway track was spiked to freshly creosoted sleepers on a bed of shingle of a far higher quality than the original.

Chained to the track was the surviving wheel set of the push-along 4-wheel  platelayers’ trolley rescued from the canal several years ago, Amberley Chalk Pits Museum (who also donated the two rails) had done a superb restoration job.

Having sailed the quarter mile or so from Hunston Jetty on Richmond, Alan Green, (a committee member of the SIAS who had prepared the drawings and specification for the track laying) said in a short speech that this was the first piece of track to be seen on the formation in 74 years; the Tramway had closed in January 1935.  John Mills and Laurie were asked to drive the two original spikes found recently on the site into a sleeper, followed by John Blackwell who similarly drove in the ceremonial golden spike. The ceremony concluded with a champagne toast raised to Colonel Stephens

Linda  Wilkinson then drove John Mills, John Blackwell, Laurie Cooksey and Ross Shimmon to view the site of Chalder station which had recently been cleared of undergrowth. She then took us to see the former Tramway Cottages in Church Road Selsey, the location of Selsey Town station, the site of the short-lived Selsey Beach station  and the 1911 Tramway embankment north of Ferry, enjoying a new lease of life as a public footpath between there and Sidlesham.

A fuller report of this ceremony appeared in The Colonel No.95, Summer 2009. 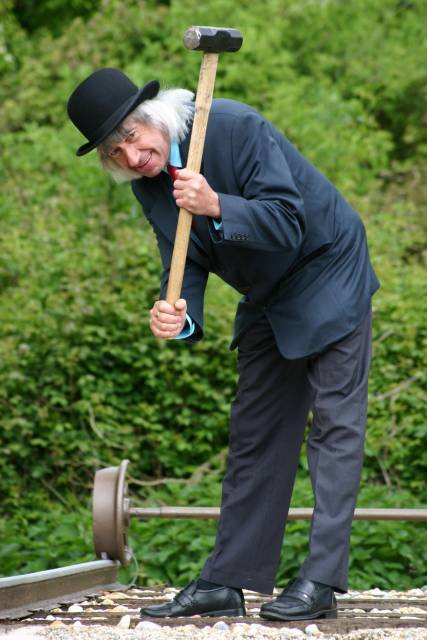 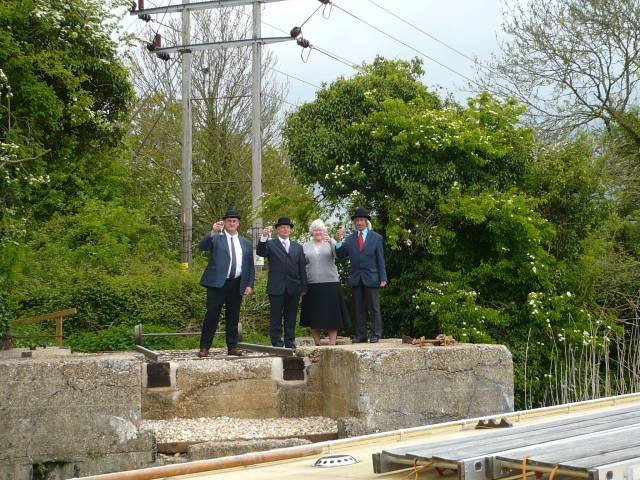