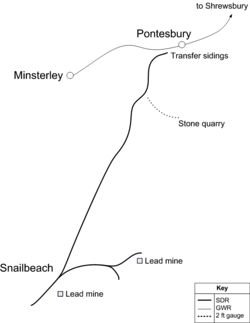 The railway was incorporated by Act of Parliament on 5 August1873, and opened in 1877. It was built with the unusual gauge of 2 ft 4 in. The line was prosperous at first, carrying 14,000 tons annually, and paying a 3% dividend. However in 1884, the Tankerville Great Consuls Company mine, the largest user of the railway, closed and tonnage fell to 5,500 tons.

In 1905, the Ceirog Granite Company opened a quarry near Habberley, and a branch was built to serve this. An extra locomotive was required, and 0-6-0T Sir Theodore was borrowed from the 2 ft 4½ in  gauge Glyn Valley Tramway. However the slight difference in gauge made this locomotive too wide for the track, and it was returned unused. Instead a new locomotive, Dennis, was bought.

Freight reached a peak in 1909, when 38,000 tons were carried, but this proved to be a short term change in fortune for the railway, and demand dwindled again during World War One. In 1923 it was taken over and re-equipped by Colonel Stephens. Stephens bought two new Baldwin locomotives from the War Department Light Railways.

When the mines closed the line lost much of its traffic but was rescued by a new traffic flow of stone from Callow Hill Quarry. There was virtually no traffic on the upper part of the line but it remained open as the locomotive shed was at Snailbeach.

In 1947 all three remaining steam locomotives were unusable and the railway was moribund. The locomotives were cut up at Snailbeach in 1950. The lower section was leased by Shropshire County Council who used it to transport road-building materials from Callow Hill Quarry to Pontesbury. When the last steam locomotive failed, loaded wagons were run from the quarry to Pontesbury by gravity, and then, when enough were ready, hauled back using a Fordson tractor straddling the rails. The railway finally closed in 1959, the last railway equipment being scrapped in 1961. The Talyllyn Railway purchased the remaining track.

The quarry remained open but the railway was lifted and, between Callow Hill and the road bridge at Pontesbury, converted into a road. Shropshire County Council ran their lorries along this road and paid rent to the railway company. As lorries became larger the long single-track road from Callow Lane to the quarry became impractical and was closed. A new access road was built in 1998 from the A488 in Pontesbury to the quarry at Callow Hill, when the quarry was extented and deepened. Shropshire County Council sold the quarry to Tarmac plc, in 2003 and quarrying permission exists until 2013. At this time (late 2006) there is no active work at the quarry and most heavy machinery has been removed.