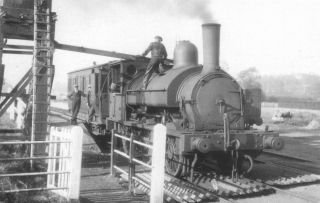 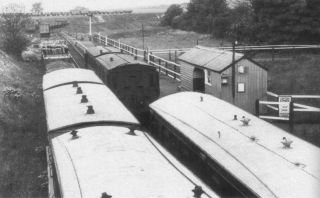 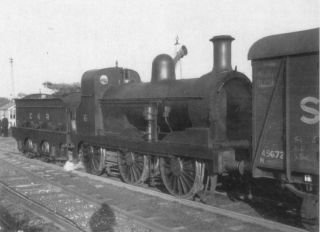 The East Kent Light Railways (official title) was originally conceived before the First World War as a network of lines in East Kent linking at least nine proposed collieries in the newly discovered Kent coalfield to a new coal port at Richborough Port. However, most of the collieries were either flooded out or abandoned before reaching production, and the EKLR only served one productive mine. RichboroughPort was a failure, and the EKLR became a truly rural railway with a heavy coal flow for a few miles only at one end between the working colliery at Tilmanstone and the SECR main line at Shepherdswell.

It was originally called the East Kent Mineral (Light) Railways when first proposed in 1909. The progenitors were Christopher Solley of "Sandwich Haven Wharves Syndicate" at Sandwich, who dreamed of his town becoming a great port again, Arthur Burr of "Kent Coal Concessions Ltd", the original promoter of the Kent coalfield and the "St Augustines Links Ltd", which was meant to have laid out a golf course.

On tickets etc and in publicity the railway referred to itself as the "East Kent Railway".

This was technically illicit, but nobody seems to have complained. The company logo was "EKR" (no heraldry).

Opening to freight traffic was in stages after authorisation in 1911 from Shepherdswell to Port Richborough, and from Eastry to Wingham (later renamed Wingham Colliery). The process was casual and without formality, hence exact dates are not easy to ascertain. Passenger services from Shepherdswell to Wingham started on 16 October1916. The initial proposal was to build a line to Canterbury goods yard via Ickham, but authorisation was only granted to build the line as far as the Wingham parish boundary. (Why this terminus was chosen, near where the direct footpath between Winghamand Ickham crosses the Port Rill, is a puzzle. Perhaps another collery was hoped for.) A major stumbling block to completion was the fact that Canterbury City Council was against a level crossing over the A28 at Sturry Road.[1] The official year of opening of the line between Eastry and RichboroughPort was 1925, but this is robably incorrect (see below on RichboroughPort). The company's bridge over the River Stour, and hence its traffic over it before then, was illegal, since it had built a fixed-span high-level bridge instead of the low-level swing bridge authorised.

A double-track tunnel was bored at Golgotha near Eythorne, and famously Colonel Stephens did not remove all the material from the double bore as a "temporary" economy. (The railway was single-track throughout.)

In 1920 there was a short extension to WinghamTown, whereupon the original terminus was renamed "Wingham Colliery". This extension had a short spur running south to Wingham Engineering Ltd's works. (The date is uncertain, because no authorisation was applied for.) A further extension followed to Wingham Canterbury Road in 1925. Also,there was the start of a passenger service from Eastry to Sandwich Road on 13 April 1925, which lasted until 31 October 1928.

Hopes of extensions were raised when the Southern Railway invested £44,000 in discounted shares (£220,000 at par) in 1926, but dashed when it lost interest {although remaining friendly and having directors on the Board). The railway settled down to running coal trains for Tilmanstone Colliery as its only profitable activity. The colliery company objected to its rates, and opened an aerial ropeway in competition to the Eastern Arm of Dover Harbour in 1930. This was a failure, as the coal did not sell on the export market and mostly found a market in London. However, it was only dismantled in 1952.

Colonel Stephens died in 1931, and was succeeded as General Manager by his long-time assistant W.H. Austen, who served until nationalisation. His period in office initially saw a tidying-up and some rationalisation of activities, together with a badly-needed rebuilding of the engine shed finished in 1938.

The only known movements at RichboroughPort were the importation of timber for pit-props at Tilmanstone Colliery, and the export of some coal from Snowdown.

Three rail guns were operating on the line to Staple during the Second World War, 1940-2.

After an extended period of increasing decreptitude, the final passenger service of two trains each way on weekdays (down from three) ran on 30 October 1948 following the nationalisation of British Railways. Freight services from Eastry to Port Richborough ceased officially on 27 October 1949 (although no train had run there for some time and track was missing on the river bridge), west of Eastry on 25 July 1950 and north of Tilmanstone Colliery on 1 March 1951. 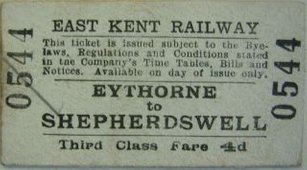 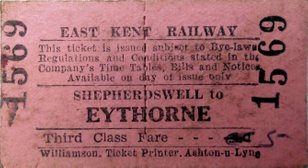 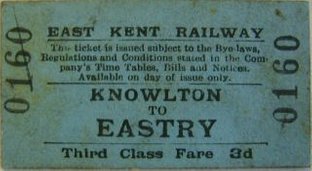 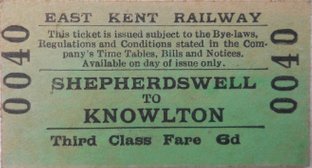 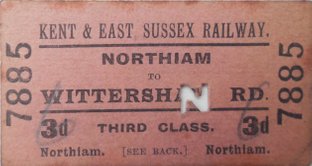 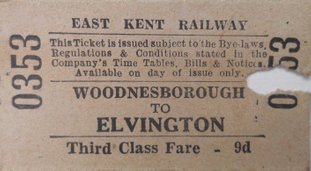 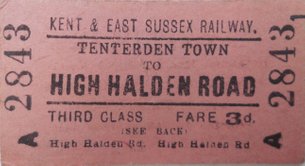 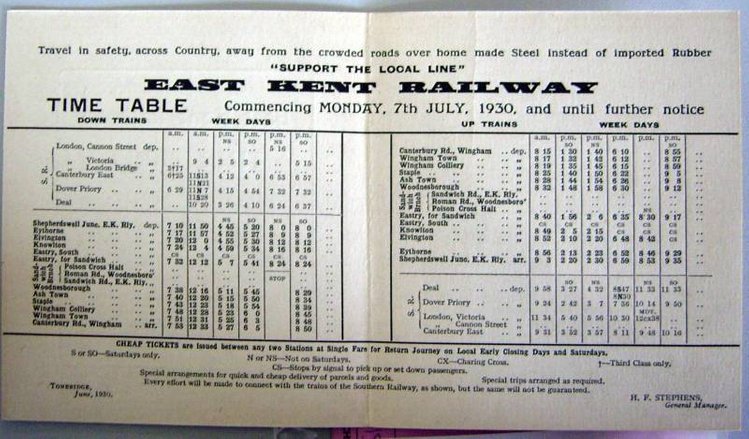