As a consulting engineer H F Stephens spent as much, if not more, of his time surveying, planning and promoting light railways than he did building and running them. Providing the bills were paid this was a profitable part of his business.

The East Kent Railways started in 1910/11 in a very extravagant way seeking to monopolise access to the numerous, and in the end largely abortive, collieries planned for the area of east Kent bounded by Sandwich, Dover and Canterbury. In the end some forty railways were planned. The first proposal for the East Kent Mineral (Light) Railways, as they were initially called, was effectively for two lines. The first was from Richborough to Shepherdswell, via the then incomplete Tilmanstone colliery, with a branch to Guilford colliery; the other from Canterbury to Eastry on the first railway via the planned Wingham and Hammil Collieries. These lines were always envisaged as colliery railways with rural goods traffic as a bonus and wisely, given the nature of the countryside, a reluctant acceptance of passenger traffic.

However, Canterbury was a clear traffic objective for both rural goods and passenger traffic. Further, collieries at Stodmarsh, Wingham and Hammil were in prospect requiring direct connection to the South Eastern & Chatham Railway in the neighbourhood of Canterbury, rather than a circuitous route to Shepherdswell. Also a great number of men would be employed during the sinking of the pits and there was no housing accommodation for these workers locally. As it was understood that housing accommodation could be found at Canterbury without much difficulty the railway, which was promoted by the colliery interests, deemed it more economical to build the line than to spend large sums of money in erecting houses in the neighbourhood of collieries

Before the hearings on the original order in 1911, opposition had forced abandonment of about half of the Canterbury line and it was only authorised from the Wingham parish boundary to Eastry. An objection of the Ecclesiastical Commissioners to any crossing of their land west of Wingham was based purely on antipathy between themselves and Arthur Burr the controlling power of the EKR and associated coalfield. Further objections had been made by the all-powerful War Office who had just bought land near Canterbury for a soon to be redundant cavalry training ground 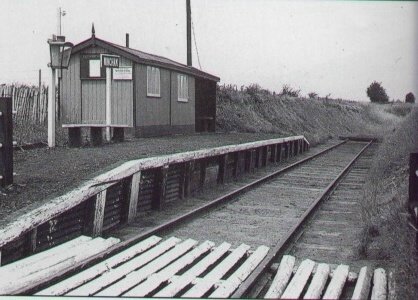 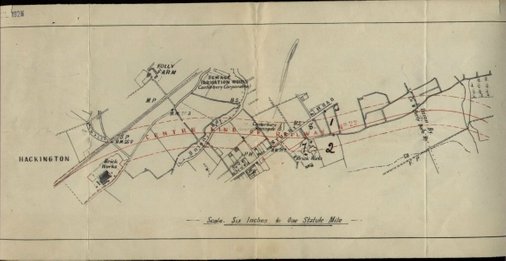 For the next 20 years the railway fought for a line into a Canterbury but it was not to be. Support for completion of the railway could not be easily had and the general failure of the coalfield to develop hit the traffic potential of the railway and its financing hard. This resulted in the farce of a terminus at Wingham (Canterbury Road) station with its single platform, without a passing loop on the wrong side of an unnecessary level crossing.

And levels crossings were a further problem at the heart of the failure to reach Canterbury. The original plans were for a station near Canterbury (SER later West) station with a line which then paralleled the SECR line to Ramsgate for some distance. Once clear of Canterbury’s existing built up area the EKR planned to veered off across the Great Stour river and its flood plain towards the slightly rising ground on which Ickham, Wickhambreaux and Wingham villages stood. In crossing the valley it also crossed the road between Sturry and Canterbury (the present A28). This was, and is, an important road used by a greater number of vehicles (1000 motors a day even in 1910) than the Dover road. Indeed at that time the road was the principal connection to all of Thanet and places east of Canterbury, before the Thanet Way (the later A299) was built along the North Coast to relieve it in the 1920s

Canterbury City Council and the Chamber of Commerce supported the Railway in principle as the city then looked to the coalfield for a considerable extension of its existing trade. Both bodies were however adamant that there should be no level crossing over the Sturry Road.

After its initial failure the EKR made an attempt to overcome land-owning opposition by bypassing the problem lands. The Railway obtained an extension order in 1911 for a line from Wingham going north as far as a proposed colliery at Stodmarsh. In 1913 a further extension to Canterbury was then proposed from that line skirting the Ecclesiastical Commissioners lands. In so doing his rather absurd line boxed the compass in the process, nearly touching the SECR line that it was proposed to join 3 miles further on in Canterbury. To maintain independent access to Canterbury the EKR had to stay on the south of the valley and then cross the Sturry Road on the level.

During the hearings in 1913 virtually all the substantive discussion centred on this road crossing. Stephens tried to convince the authorities that the Railway had to have a level crossing but might, if forced into a corner, accept a road over the railway. As the land was flat this was the cheapest option as road traffic could take short 1 in 20 gradient approach embankments. A railway taking heavy coal trains required a 1 in 80 gradient and far more expensive and lengthy embanked approaches. The unpopular suggestion was made that the Council might pay for this if they could not accept an overbridge.

Other crossings were proposed in the area, two within a few yards of each other at Fordwich, one on Broad Oak Road and St Stephens Road in Canterbury itself. To eliminate these and the Sturry Road crossing the Council suggested joining the SECR East of Sturry station. Stephens rightly pointed out that any such move would simply increase road congestion further up the Sturry Road in Sturry itself (still a very troublesome crossing today). His principal objection was however to the loss of a terminal station. This was a key point in Stephens’ worldview as use of other railways stations deprived light railways of terminal charges and therefore revenue: he always built separate stations when he could. Stephens did however readily agree to reposition his station east of St Stephens Road to eradicate one level crossing. The EKR station would then be situated at the corner of Broad Oak and St Stephens Roads a good walk from the city centre or any interchange with the SER (later West) station. It would have been a nice vanity if it had been called Canterbury St Stephens.

The inability of the railway to resolve the financial and engineering issues of the Canterbury approach, combined with the continuing problems getting collieries in production and finally the start of the Great War, caused the loss of the 1913 proposal. The EKR came back to it in 1917 and after years of struggle in 1920 finally got the Canterbury powers they craved. The City Council had however prevailed and the Railway was forced to rise over the road. Moreover, in the interim, Wingham, Hammil and Stodmarsh collieries had failed. Costs had of course risen and finance was clearly not available. Nothing happened. 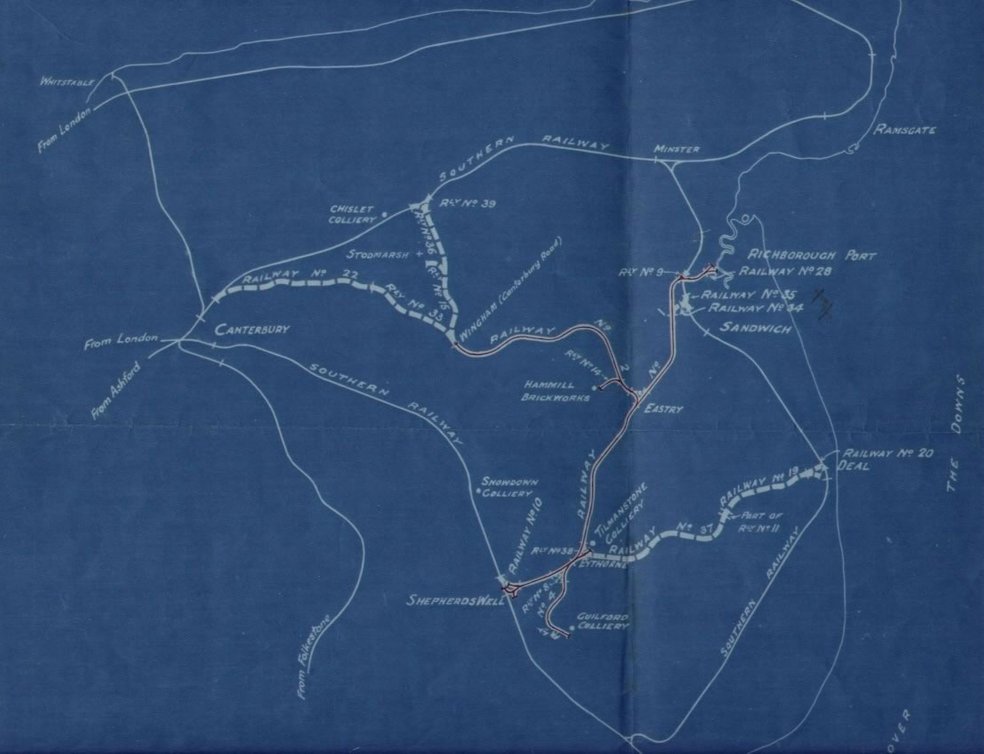 Stephens was never stopped though and in 1927 further light railway proposals were made to finish the job. The Burr /EC dispute having been resolved by Burr’s death in 1919, powers were sought to straighten the railway back to the course proposed in 1910. Regrettably this proposal was too late. Although proposals for the development of the coalfield did not die for another 20 years the envisaged rural and passenger traffic was probably no longer there. Indeed perhaps the railway saw this for itself as one of the clauses sought powers to run buses.

At this point the Southern Railway, who had effectively taken control of the EKR, clearly influenced events. After two further drafts the order was passed in 1931. But there were no bus powers (the Southern already had extensive bus interests) and the Canterbury branch had no independent station. Canterbury had by this time lost interest in a connection with its villages, which were anyway served by excellent bus connections. Even the beloved Canterbury and Whitstable had lost its passenger service at the end of 1930. With Stephens death there was no will to go on and Wingham's peculiar Canterbury Road station remained to fascinate a further generation before even this vestige of faded hopes finally disappeared from the face of the earth.