This could have been the motto of the East Kent Railways on which Stephens spent so much time to so little effect in terms of operating railways. Not only did many of the 40 projected railways and spurs fail to get built but also, when they did, they did not do so in the way originally planned.

Shepherdswell station, sidings and shed always had an unfinished rambling appearance that belied its status as the operational centre of a rural light railway with fairly busy colliery traffic. It was not planned that way and was indeed never intended to be in that precise location at all. Neither was a major tunnel planned - this was not the Stephens way of building a light railway 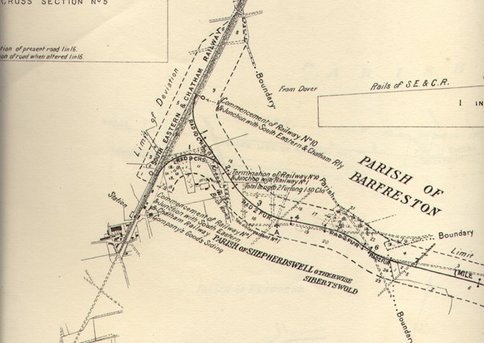 When the railway was planned the operational hub of the railway was to be at Eythorne, where the branches from Tilmanstone, Guilford and Deal would have met the mainline from Shepherdswell to Sandwich Haven. Here were to be placed the sorting sidings together with associated facilities like an engine shed, workshops etc. Sandwich was to be the main shipping point and Shepherdswell was probably thought of as a secondary outlet. The line to it was to have climbed at 1 in 40 over the ridge from Eythorne then down at 1in 50 through a triangular junction in a cutting well to the north of Shepherdswell (SECR) station.

This is where the trouble started. The landowner here, a Mr Dixon, had laid out speculative roads for a housing estate that would have been severed by the new railway. He held out for purchase of the whole estate at great cost. What we might today call a ransom strip.

Tilmanstone colliery production was imminent, and construction traffic hauled by traction engines was destroying the rural roads, so a railway was urgent. Fortunately the coal interests promoting the EKR had in 1908 taken a lease on land belonging to a widow, Mrs Susan May, on land between the proposed junction and the SE&CR station.

In May 1911 they reached agreement with Mrs May that, on condition that the land was quickly restored to its original state, a sharply curved temporary railway could be built through a shallow cutting. The railway could then pass over other land, including a brickworks, that belonged to a director of the company, H R H Rice. The necessary agreement for a temporary junction with the mainline was secured in an agreement signed on 7th September. The line was then quickly made through the cutting and turned sharply south along a temporary embankment that was visible for many years near the end of the later EKR platform. Although they did not yet know it, the temporary cutting, and Mrs May's land through which the line passed, was destined to be the site of Shepherdswell HQ and the cutting the permanent junction to the mainline.

The temporary railway then crossed the Eythorne road before swinging back towards Tilmanstone. This sinuous course was to avoid Dixon's land by staying on Rice’s. The sale deeds for the land concerned survives. They show that the route followed closely the south side of the Eythorne road up to the summit were it veered south, crossed the Waldershare road at a crossroads, and passed on to other land. It probably then came gently back alongside the Eythorne road, re-joining the permanent formation from the south some way short of the later Eythorne station. A temporary track was laid as a surface line on this land and on to Tilmanstone colliery and was reportedly in operation by the end of October 1911. 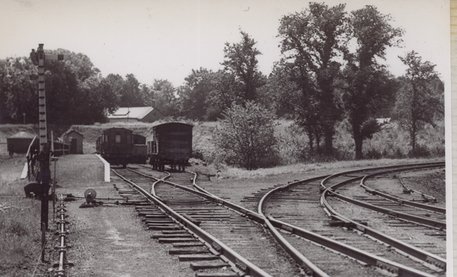 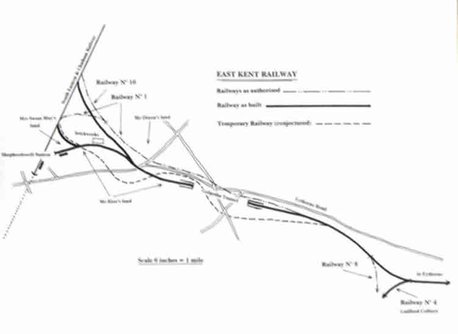 The intended permanent route lay on the north side of the Eythorne road going up and over the ridge where a shallow 16 ft cutting was planned before crossing the road on the level and falling to Eythorne junction and sidings. However, at the hearings into the light railway order, things and not gone well. The hearings were almost solely devoted to two problems at Shepherdswell. As a consequence the permanent route was changed forever

First Mr Dixon’s speculative building site on the bleak fields adjacent to the Barfreston road seemed to pose an insuperable problem. Although the speculation had proved a failure and only one house had been built the railway would ensure none ever could be. Except at great expense this land could not be acquired

Further towards Eythorne things were nearly as bad. Near the summit cutting the railway was to carve its way through a complex of roads. In particular it was to cut a bridle path on the line of a roman road at Shepherdswell Firs near a spot long called Golgotha. At the hearing into the order in 1911, the Light Railway Commissioners decided that a bridge should be built here. This made necessary a reduction of the gradient from 1 in 40 to 1 in 50, and the commission decided the railway would gain sufficient advantage in reduced operating costs to offset the extra cost of cutting and bridge construction.

Stephens left the hearings with his tail between his legs and clearly thought deeply. To avoid severing Dixon’s land meant bringing the line further south by about 50 yards. This forced the south Dover-facing spur of the Junction with the SECR to make too sharp a turn. A plan then seems to have been devised to use Mrs May’s land to create a south curve. This may well have been on the site subsequently adopted for the EKR station, for this was always an odd island platform style construction in a seemingly unnecessary cutting. However this connection could not be built as the SECR somewhat understandably objected strongly to it, as it would have to have been driven right through the existing station and yard. The Dover connection was abandoned.

With the main line forced south by the need to avoid Dixon's land, the alignment for the line to the enforced shallow summit cutting and bridge was not ideal. A cutting and tunnel south of the Eythorne road, passing under the complex of roads that had caused trouble at the enquiry, came under consideration. Dixon seems to have been amenable to selling a small portion of his estate and Rice sold the land for the Tunnel and its approach in September 1912 The original alignment was to be regained after the originally planned crossing of the Eythorne road. The additional cost of all this extra work would be justified by the first class alignment as the Collieries came on stream and the cost of haulage was reduced. The Tunnel was now built quickly probably commencing well before the land sales were complete.

‘Things do not always work out as planned' 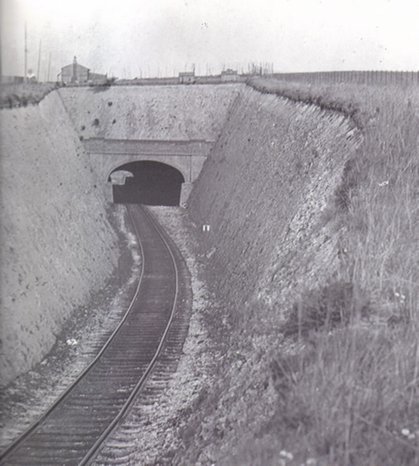 Tilmanstone commenced coal production in May 1913 and all coal traffic passed over the temporary line. The permanent line including Golgotha Tunnel was completed in the first week of October 1913 and the coal traffic was transferred to that. The temporary line over the hill was then pulled up and the rails and sleepers utilised elsewhere for sidings etc. The land reverted to agriculture but was later put to other uses. The railway built three staff bungalows on one spot and other areas close to the village went under houses in the 1960s. Indeed the author lived in one of these when it was first built and would have been much intrigued if he had known at the time that the ‘ railroad had run through the middle of the house’.

The formation of the revised line was now permanently connected by a further line from end of the tunnel cutting and the Eythorne road level crossing joining the ‘temporary’ cutting through Mrs May’s land. It passed through the brickworks site which was used for the original ramshackle, and obviously temporary, engine shed and the small fan of sidings that became so familiar.

The original proposed line from the crossing on an embankment to the cutting to the northern junction (railway number 10) formation was constructed after the First World War However, its alignment was such that a Dover facing spur could never be built. The embankment was widened sufficiently to take a fan of seven sidings and a full double junction agreed with the, now, Southern Railway. A signal box was also built for the mainline. However the failure of Guilford Colliery and the construction of a ropeway from Tilmanstone to Dover Harbour made further expenditure pointless. One line was only ever laid on it for a siding and the author remembers the embankment solely as a great place for butterflies

This is the text of an article by Brian Janes that was published in the Tenterden Terrier, house journal of the Kent & East Sussex Railway in its Spring 2004 edition.