Brian Janes provides some glimpses into construction of Light Railways through a rare, surviving workman's notebook.

When we think of railways we usually start with rolling stock, then, if we have specialist interest signals and track, but very few of us think about the creation of the basic formation which is the line of the railway itself. Even less do we think of those workers who created that formation – the navvies. Light railways such as Holman Stephens' were built as cheaply as possible and without benefit of any significant amount of construction equipment. They were perhaps some of the last examples of Victorian – even pre-Victorian – construction methods. But we seldom think about these, or even less the forgotten generation of those workmen that built them.

Lawson Finch in his epic compilation of material for his long gestated history of the East Kent Light Railway did not forget these creators of the dreams of others. In material recently donated to the Colonel Stephens Museum by his widow, there was found a dog-eared black notebook possibly compiled by the man in direct charge of part of the work. John Brenchley was originally the overall boss of the northern part of the construction of the railway under Stephens, but the notebook is more likely that of the foreman, Jack Houghton or possibly his ganger boss, Ernest Northcote. It provides a fascinating glimpse of a lost world. The notebook records the efforts of a team building part of the East Kent in periods of 1913 and 1914, mostly on cuttings and embankments (some now not readily identifiable) just north of what became Eastry station. And what efforts they were too. 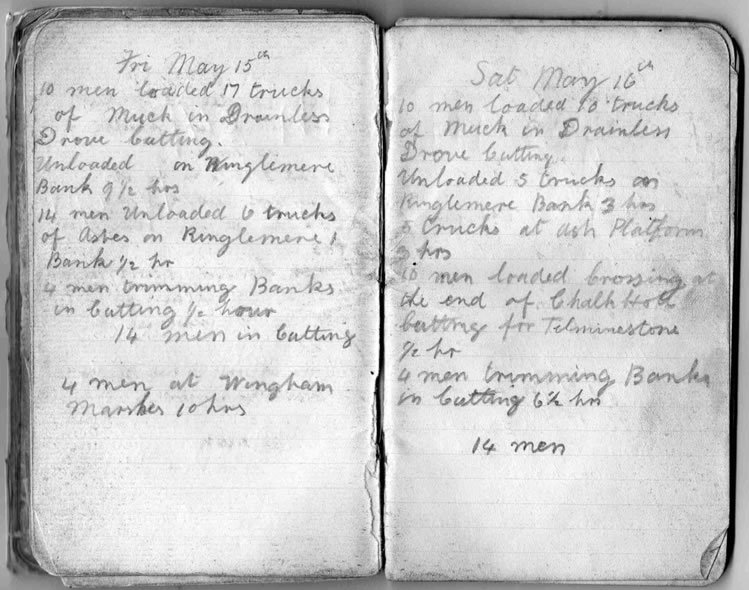 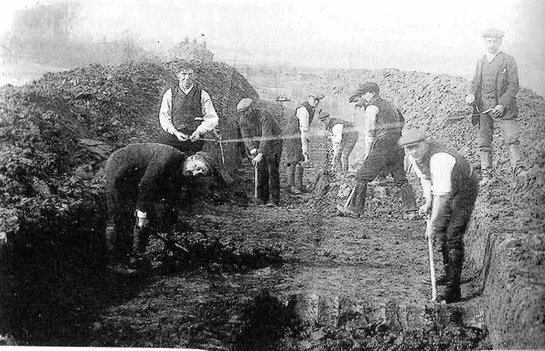 Half of the book records the daily hours worked by each man. The norm was working an 11 hour day (6½ on Saturdays). However many days were short, either due to men being redeployed, shortage of money, bad weather or a combination of all three. A few of the regular surnames that appear are Messrs Bates, Belsey, Bicker, Chapman, Collins, Cox Fagg, Hogben, Hastings, Lawrance, Pilcher, Pritchard, Shexted, Shrabsole and Warner. There are many others but often they appear a few times and then disappear and gang numbers vary between 10 and 20 each day. These men may have been re-deployed on other gangs or simply drifted away from the work, perhaps even to the Army.

A few glimpses will show how these men dug out and shifted 'muck' (earth) and other heavy material at an impressive rate. On the starting day of the entries, 25th September 1913, they unloaded 5 'trucks' (wagons) of muck and five of chalk, and spent 6 hours levelling ashes. The next day they 'cut' 3 trucks of muck, 5 trucks of chalk and spent 4 hours 'casting' muck (presumably for covering the cutting sides) in Prince of Wales cutting.

There is then a break in the notes till 1st December when laying rails and moving muck in Prince of Wales cutting, loading muck and offloading on Ringlet Mere bank cutting, chalk in Plum Trees cutting and laying about ten yards of track each working day. Next week they were continuously unloading muck and levelling Poulton Road, relieved only by unloading 'baulks' (presumably sleepers) from a train that arrived at 9.20am on the Wednesday; and this monotonous hard and, in December cold, work continued till Christmas Eve.

Work resumed on Monday 29th December and to see the New Year in on 1st January the gang prodigiously unloaded 9 trucks of muck and loaded and unloaded 24! Through January they worked consistently hard, loading up to 32 trucks of muck a day, and might have handled more but on several occasions spent some time waiting for an engine to move the trucks. By this time, they were often laying and slewing 'road' (track) and by mid-month even laying ballast. Precise locations were not often mentioned at this period but they occasionally lifted rails from the 'Ammel' (Hammill, sometimes called Woodnesborough) colliery branch which had by this time been effectively abandoned. By mid-March they were building Wells Farm Bridge but the notebook breaks again on 1st April.

On April 20th entries resume, moving muck from Drainless Drove cutting to Poulton Bank near Poulton siding, where in World War 2 a second siding was installed for a mobile coastal defence gun with its accompanying Dean Goods locomotive. Between Ash and Staple more detailed work continued through May at Drove Cutting, unloading at several locations including Sandwich Bank by the 8th and appropriately unloading ashes for Ash station platform. The men were by then beginning to move to Wingham Marshes and Wells Farm platform (Eastry station) construction, but work continued on Drainless Drove till entries on 13th June ended with a triumphant 'finished Cutting'. During May they undertook what was obviously widening works at Tilmanstone Colliery.

After the interminable Drainless Drove, work finally moved on to Wingham cutting clearly using narrow gauge lines ('Skip road') and 'running' skips (measured as 'Setts of Muck') and there is an undated note from this time of setting out the survey pegs 'from Wingham stream through cutting'.

Under the complex arrangements to build the East Kent Railway, an East Kent Construction and Finance Company was contracted to build the railway but the actual construction work had been subcontracted. Shepherdswell to Eastry was built by William Rigby, but the railway from Eastry onwards was let to Holman Stephens with a further sub-contract to John Brenchley, and it was on this section that virtually all the work outlined in the notebook was done. Stephens suffered badly from underpayment for the contract and the men often went unpaid and this surely reflects in the fluctuating and fluid manpower recorded. The cash shortage became acute during the approach to the Great War which finally broke out on the 4th August. Work had clearly been winding down and the last work entry was on the 5th with the author saying 'Finished up' on 19th August 1914. The work then seems to have stood in abeyance for many a month.

Later Stephens resurrected the East Kent project as finance trickled in and was to report in May 1915 that temporary lines were in place to Dambridge Road on the Wingham line, and Gosshall Sluice on the Sandwich line, which is pretty much where the work in the notebook left us. The line was described as permanent from Shepherdswell to Eastry, on the portion where Rigby had been the main sub-contractor. By 1st June 1916 Stephens reported that no progress had been made for a year, which perhaps understates the truth on the section north of Eastry. From Eythorne to Eastry work was in hand, and ballasting and widening was completed to Woodnesborough on the Eastry to Wingham line. Wingham Colliery junction to Dambridge road was being worked on and Eastry to Ash nearly finished. No work was being done beyond Dambridge Road. Interestingly the embankments on this section were, according to our notebook, being built with good material but were clearly subsequently completed with colliery waste which was to give much trouble later with spontaneous combustion in the embankments. The section from Tilmanstone to Wingham (by Dambridge Farm), also known as Wingham Colliery Halt, on which our notebook dwells so much, was finally opened to the public on 16th October 1916.