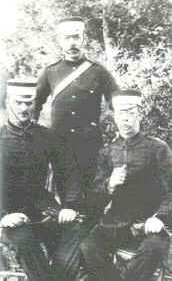 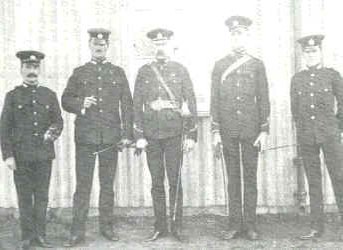 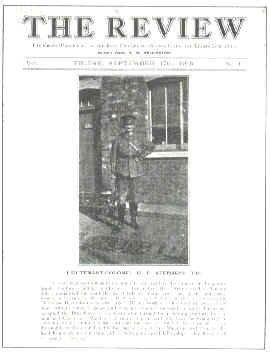 Stephens was never a full-time army officer, but a member of the 'volunteer forces', (later the Territorial Force) and was so able to continue his railway work in parallel with his military career.

He became secretary of the University College School cadet company and in 1888 attended a summer camp at Aldershot at the age of twenty. His first commission came in 1896, when he reached the rank of second-lieutenant (as pictured, seated left) with the 1st. Sussex (Volunteer) Royal engineers at Eastbourne. The following year, he was promoted to Lieutenant, and in 1898 to Captain, whilst still based at Eastbourne. During this time Stephens recruited some 600 men to serve with the Royal Engineers in the Boer War in South Africa.

Stephens recieved a fresh commission in 1905 as a Captain with the 2nd.Cinque Ports, Royal Garrison Artillery (Volunteers). Again this commission was base at Eastbourne (pictured centre left Stephens 2nd. left).

The old volunteer companies were replaced by the Territorial Force. Stephens reached the rank of Major, acting as Commanding Officer of the five companies of the Kent (Fortress) Royal Engineers, moving to his headquarters in Chatham. In 1913, Stephens was given the command of the Cadet Battalion of the Kent (Fortress) R.E., again with the rank of Major along with his other duties.

In 1915, Stephens appeared on the cover of 'The Review' and in 1916 was futher promoted to the rank of Lieutenant-Colonel. As the First world war dragged on, Stephens devoted more of his time to the military effort. However, the War Department put pressure on him to become full-time in the army. Given an ultimatum of full-time army service or his blossoming railway empire by the War Department, Stephens returned to Salford Terrace. However, it was not for long as in 1917, he was transferred to the Territorial Force Reserve, being mentioned in dispatches in 1917.