The Hub Of The Empire

By the summer of 1895, Holman Stephens had spent some five years in Kent and was looking for a headquarters for his engineering practice. He took rented rooms at a private residence, Ashby House, Priory Road, Tonbridge (since demolished) and when these became too small, he rented commercial offices at 23 Salford Terrace, Quarry Hill Road, Tonbridge from 1900, purchasing the freehold in 1927

The premises consisted of a basement area and three floors. Outside the front door a board proclaimed in gold letters that it housed the offices of a group of light railways.

The basement included one main room occupied by two clerks, a blueprint washing and drying room and two small rooms for filing papers.

The front room on the ground floor was occupied by J A Iggulden, Stephens 'indoor' assistant, the principal clerk and two assistants. To the rear of this was the inner sanctum, where Colonel Stephens presided. The upper floors were of identical layout. The front room on the first floor was the general drawing office and civil engineering department, filled by W H Austen, the Colonel's 'outdoor' assistant. The staff numbered about 17 in the 1920's.

After Stephens' death in 1931, the offices were acquired by Austen personally, but continued to fulfil their original function up until nationalisation of the railways in 1948. It was then sold, but remains in commercial use to this day, the exterior virtually unaltered. 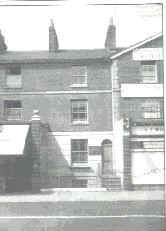