Over a period of seven years, I have compiled a family tree for Holman F Stephens starting with his great grandfather. It has not been easy as his father, Frederick George Stephens, may have deliberately attempted to conceal some murky aspects of the family history.

Also research has also been hampered due to the fact that there is no published biography of Fred Stephens, even though he was an original member of the Pre-Raphaelite Brotherhood, so notable in Art history. Further the entry for him in the new edition of the Dictionary of National Biography merely perpetuates existing errors. Alas, Holman Stephens failed to obtain an entry in the Dictionary, despite submissions being made to the publishers for his inclusion.

Documentation of the early history of the Stephens family is confined to a short biographical sketch of F G Stephens contained in a monograph published privately by Holman Stephens entitled Frederick George Stephens and the Pre-Raphaelite Brothers. This work consists mainly of reproductions of paintings in his father’s art collection. Holman Stephens states that his grandfather, Septimus Stephens came from Aberdeen and that his great grandfather was called Octavius Stephens and came from Dublin. Septimus Stephens himself, however, claimed on the 1851 census that he came from Manchester and my researches show that this is much more likely to be correct. So why should he have put round the Aberdeen story, or perhaps he didn’t? The International Genealogical index (which is not by any means definitive) shows only one Septimus Stephens born in England during our period and none from Scotland. It contains no references at all to an Octavius Stephens, so perhaps he did not exist. It is much more likely that our Septimus’s parents were John, a gardener, and Mary who came from Prestwich in the Manchester area. They certainly had a son named Septimus, born in 1784 or 1786, and another child called Ralph, born in 1791.

Court records show that a Septimus Stephens was convicted of embezzling money at the quarter sessions in Salford in 1807 and sentenced to two years imprisonment at Lancaster Castle. The location is quite feasible, because at that time Manchester did not have its own quarter sessions. We know that our Septimus Stephens moved to London in about 1818 and in the 1820’s was a tavern keeper at the Cock & Lion Coffee house in St Michaels Alley, Cornhill but by 1825 was bankrupt. To this day, there is a tavern on the site called the George & Vulture. F G Stephens was born at Cornhill, possibly at the Cock & Lion, but he told the world at large that he came from Walworth, a smart London suburb at the time, which he moved to in 1850 when he was 22. Being a Pre-Raphaelite meant that one had to have a reasonable address and pedigree. 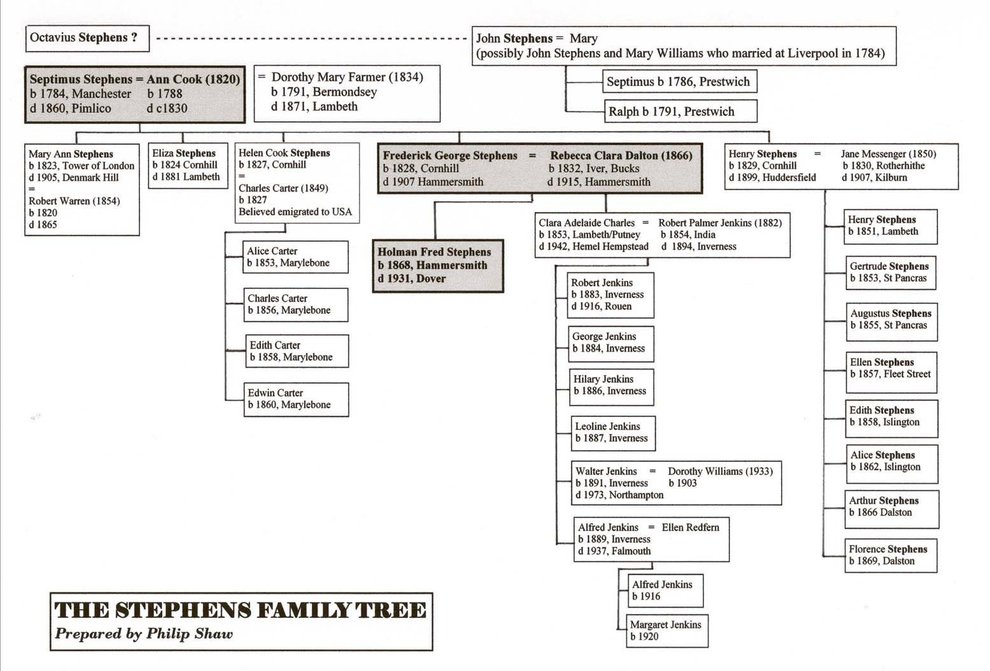 Septimus was undoubtedly a “jack of all trades”. He and his second wife Dorothy were Master and Matron of the Strand Union Workhouse from 1836 to 1839. Surviving correspondence shows that in 1837 he was the subject of an investigation into alleged interference with the contractor for linen drapery and hosiery at the workhouse, but no action was taken. After he resigned from the workhouse in 1839 was in trouble again by 1841, as the census for that year shows him serving a sentence at the County Gaol of Surrey in Newington; which a London Gazette entry shows was for debt. Septimus then became a butcher (‘porkman’) and then a general dealer (‘chapman’), a land agent and lodging house keeper. He was listed again as in gaol for debt in 1853.

Apart from Frederick he had four other children. These were Mary Ann, born at the Tower of London, where he apparently had business and Henry, Eliza and Helen, who were all born in Cornhill. Mary Ann married Robert Warren, proprietor of Warren’s Patent Blacking factory, immortalised by Charles Dickens, who was put to work there as a child and hated every moment of it. This was subsequently mirrored in David Copperfield, which is, of course, a biographical sketch of Dickens at this period of his life. Eliza Stephens lived quietly as a spinster. She presented a prayer book to young Holman Stephens, possibly at the time of his confirmation, which is now contained in the Colonel Stephens Museum. Henry was a tobacconist and music salesman. He died unexpectedly at the Imperial Hotel, Huddersfield, in 1899. Helen married Charles Carter, a picture framer and engraver, who F G Stephens used from time to time and the family are believed to have emigrated to America.

In 1866 Frederick Stephens, amidst much secrecy, married Rebecca Dalton, a spinster who had an illegitimate daughter called Clara Adelaide Charles (or Lottie as she was known). To his friends, however, including Holman Hunt, he proclaimed his new wife to be a widow. At what point the truth emerged is not recorded, but Hunt was a witness to Lottie’s wedding certificate in 1882 and so he must have found out then. The story of Lottie is fascinating in its own right and is told elsewhere.

There are two questions that have emerged during my researches. Firstly, did Holman Stephens, in compiling the notes on his family in 1920, deliberately falsify some of the information for the sake of appearances, or did his father conceal the truth from him? Secondly, are there any “Stephens” around today who can claim to be descendants of Holman Stephens? The answer to the first question is most likely that he did not know the facts surrounding his father and grandfather. As far as can be ascertained, he had little or no contact with any of his relatives, apart form his parents, and he would not have known either of his grandparents. With regard to the second matter, any Stephens today would have to come through the male line of Henry’s children, Henry Jnr, Augustus or Arthur. There is an outside chance that Septimus’s parents (John, Octavius or whatever) had other male issue. In this respect Ralph Stephens has come up on the International Genealogical Index as a possibility. Updating the family tree will continue but it may take several years before we can answer all the queries, if ever.

This is a revised version of a talk given by Philip Shaw at the commemoration of the 75th anniversary of Holman Stephens’ death, which was subsequently published in The Colonel, the journal of the Colonel Stephens Society