The story of Lottie Jenkins

A Glimpse of Victorian Family Life

The Story of Lottie Jenkins, Holman Stephens’s half sister

Holman Stephens’s father, Frederick George Stephens, was secretive about his private life even within the circle of the pre-Raphaelite Brotherhood of which he was such a prominent member. His friend and confidant William Holman Hunt, who had been enjoying a long and un-easy courtship with Fanny Waugh since 1859, announced in 1865 that he was finally contemplating marriage to her. He hoped that Stephens would be best man, but there had been long standing rumours that Stephens himself was married, which  would, by the standards of the time, have rendered him ineligible. Hunt asked Stephens to clarify his status and in August 1865, Stephens told Hunt that he was no longer a bachelor and therefore regretted that he could not oblige his old friend. He added that he was annoyed that anyone had heard rumours of his “secret” marriage.

In fact Stephens seems to have been misleading Hunt as he did not marry until 8th January 1866. The marriage took place at the church of All Hallows, Barking, which despite its name is close to the Tower of London. This was a location remote from his usual haunts and was made possible by using a nearby coffee shop as an accommodation address for him and his bride. He told his friends that his wife was a widow, Mrs Clara Charles, but her status and name were incorrect. The marriage certificate shows that Stephens married Rebecca Clara Dalton, a spinster. Furthermore, she had at least one child, known to the wider world as Clara Adelaide Charles and in the family as “Lottie”, who was therefore almost certainly illegitimate. Little is known about Stephens’s new bride’s early life and nothing about her child’s natural father, William Charles. The 1861 census records Lottie as a child, aged seven, living with her grandparents, Riley and Sarah Dalton in the Old Brompton Road, Kensington and that she was born in Putney. Attempts to trace Lottie’s birth certificate in or around 1853 have been unsuccessful and it may be that her birth was never registered. Frederick Stephens seems to have accepted her fully into the family .When Holman ( known in the family as “Holly”) was born in 1868, surviving family correspondence suggests that she adored her mother, stepfather and little stepbrother. Lottie was given an excellent education at a private school in Sussex, followed by a stay in France and Germany. 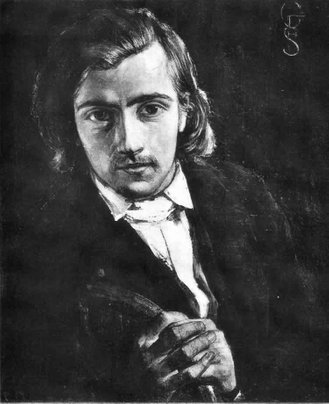 In 1879, Lottie went to stay with some friends in Inverness for some months and early in 1880 she became engaged to a local solicitor, Robert Jenkins. For some reason she did not contact her stepfather nor did her husband seek his ‘permission’ to marry his Lottie. The wedding was held in her home parish of St Peter’s Hammersmith on 18th October 1882, but her stepfather refused to give her away and, as far as is known, neither he nor her mother attended the ceremony. It must have caused further irritation, if not embarrassment to him that Holman Hunt attended and was a signatory to the marriage certificate. All this caused the intense wrath of Frederick Stephens, who, as far as is known, never communicated with Lottie again.

The formerly warm and close relationship of Hunt and Stephens had soured at this period, triggered by a seemingly trivial issue, and this may have contributed to the ill feeling. In May 1879, Stephens had sent Hunt a cheque for £13 to be used for Hunt's son, Hilary’s, benefit. Hunt had sent exactly the same sum to Stephens when Holly was born in 1868. Hunt interpreted this gesture as a deliberate slight, because of a secret grievance which he imagined Stephens had against him. Stephens, wounded by this suggestion, immediately returned the £13 that Hunt had sent for Holly, 10 years or so before.

Lottie settled down to married life in Inverness and had six sons, the first in 1883 and the last, Walter in 1891. However, tragedy struck in 1894 when her husband died. This left Lottie virtually destitute and there followed a series of letters to her mother and stepfather asking for assistance to support her young family. She also asked to be put in touch with her stepbrother, Holman Stephens, with whom she appears to have had no contact since childhood. He was by then living in Tonbridge and building up his growing engineering practice. There is no evidence that any of this correspondence was acknowledged and the rift proved final. Lottie was not mentioned in the wills of either her mother or stepfather and, as far as is known, never had a contact with Holman Stephens in his adulthood.

In 1902, or thereabouts, Lottie left Scotland with at least two of her children and went to live in Falmouth, Cornwall. In 1936, she moved to live with her youngest son Walter, who, by then, had married and gone to live in Hemel Hempstead, Hertfordshire. She died there in 1942 at the ripe old age of 89. Perhaps a sad end to a life which, at one stage seemed destined for greater happiness with her family: a situation brought about by an unfortunate error of judgement at the time of her engagement 62 years earlier, but dictated by a stepfather who had failed to conduct his own marital affairs with any degree of candour.