As has been described elsewhere in Topics the new 0-6-2Ts built new for the Shropshire and Montgomeryshire were sold off in somewhat obscure circumstances to the Government during World War I. The author of that Topic speculated that their sale might have been precipitated by an accident, which took place on 22nd July 1915 which, but for fortune, might have been disastrous for the new railway. Here is a slightly shortened contemporary account from “The Shrewsbury Commercial and Literary Circular” for week ending 31 July 1915. The frankly poor grammar and contemporary prose has been retained for atmosphere. The photos are from the Colonel Stephens Archive.

All the elements of a serious accident were present in a mishap which occurred on Thursday last on the Shropshire & Montgomeryshire Railway, better known locally as “The Potteries”, and no-one who has visited the scene and gathered the facts concerning the occurrence from eye witnesses of it can fail to realise that the total absence of either loss of life or of injuries from the consequences is due entirely to some indefinable “good fortune” rather than “good management”.

The facts, as ascertained by us from various travellers on the train, may be relied upon to be as follows: -

The train, due out of Abbey Foregate at 2.30, left that terminus fairly punctually, and proceeded on its journey devoid of incident until it reached the Bridge which spans the Severn at Shrawardine. This bridge is a wrought iron structure, consisting of two spans, each of some 50’ in length, crossing the river which at this point wends its way through a deep valley some 50’ below the railway. On either side of the bed of the river there is meadowland necessitating another four spans, two at each end of the two referred to crossing the river, there are thus in all six spans each of some 50’ in length, the two centre ones being distinguished by the fact that they are of a more solid appearance and the sides rise, arch-like, to a greater height than their fellows at each end as is easily seen from the accompanying photos.

The first intimation the passengers had that something was wrong occurred when the train had travelled some 10’ of the bridge, when an unusual grating noise was heard, followed by a tremendous bumping and jolting, which made it perfectly clear to the occupants that something unusual had happened. Before any effort to discover the cause could be attempted, the passengers were thrown in a promiscuous heap on the floor. The particular compartment wherein were our informants contained seven passengers, two gentlemen with their wives, two gentlemen and one young lady. 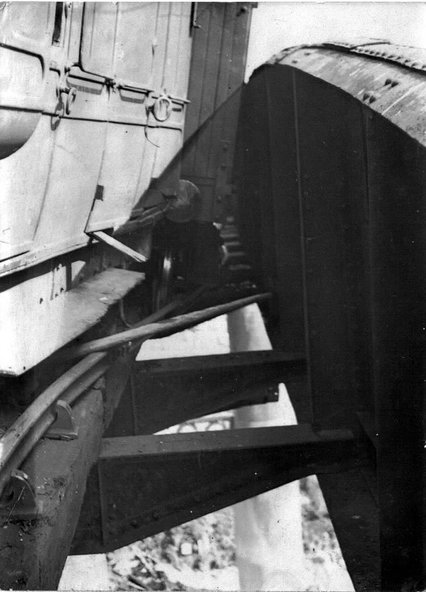 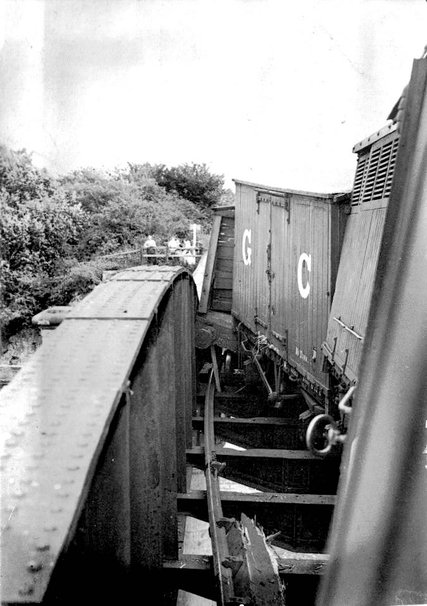 As may be easily imagined consternation at once reigned. The two married gents were able to subdue the rising panic in their respective partners fairly well, but so horror-stricken was the young lady that, before anyone could interfere to prevent her, she had clambered through the open window on to the arched side of the bridge so near to which was the carriage that it was afterwards found to be impossible to open the door. The girder upon which the young lady crouched clutching like grim death with her hands, was in the centre of the bridge, from which there could be no way of escaping save by crawling the whole length of the girder with any moment a fall into the water, 50’ below, possible.

One of the gentlemen in the carriage, Mr E P Lewis, solicitor, fortunately had the presence of mind to reach out and catch hold of the lady, a few moments later also climbing out on the girder for her further protection. There the two had to remain for over an hour, it being impossible to open the door on the other side of the compartment owing to its being jammed. The remainder of the seven passengers in the compartment with a lively sense that anything further might at any moment happen had perforce to remain caged up until ultimately some workmen contrived to break open the door.

Now a new difficulty arose, one which can easily appreciated by a glance at the photograph.

It was at once seen that it would be quite impossible for even the men, much less the women, to step from girder to girder as was necessary in order to get away from that part of the bridge where they alighted, and so the few workmen, assisted by some farm labourers who had rushed to the scene, had to tear up the foot planking which can be seen running along the centre of the track from that portion lying underneath the train, and replacing them by the side as seen in the photo, along which the, by this time thankful, passengers had to walk until they emerged from the length of the train when they continued the sufficiently perilous journey along the centre planking, one old man doing the journey on hands and knees.

Having at last, after about an hour-and-a-quarter, succeeded in reaching terra-firma, the little crowd of some 20, walked along the line to Shrawardine Station, where after some delay they were able to get into telephonic communication with Shrewsbury, as a result of which the Station Master of Abbey Foregate cycled over.

On this official’s arrival he proceeded to make such arrangements as he could, by which a train was sent from Llanymynynach to Shrawardine which took the stranded passengers to that village. Here, the Station Master provided a substantial tea for those who had travelled, a few of the passengers having walked back to Shrewsbury from Shrawardine.

After some considerable trouble, arrangements were made with the Cambrian Railway, by which a special train conveyed them together with members of the Claremont Street Sunday School, who had preceded the ill-fated train to Criggion, and of course been unable to return, to Buttington Station from whence the whole party was brought by the L&NWR, Co. arriving at the General Railway Station about 10.20 p.m.

A glance at the photos will enable the reader to see that whilst unaccompanied by loss of life or serious injury to limb, the accident was one the seriousness of which ought not to be in any way minimised.

It will be observed how the rail under the van marked GC, has been torn away, timber bed and all, the baulk being broken off and the rail lying on its side far away from its original position.

The end of one vehicle can be seen to be in contact with the side of the bridge, and it is clear that had it not been for the superior character of the structure itself, the train and its human occupants would almost inevitably have been hurled to the depths below.

On Sunday morning the writer visited the scene and found the train still in the same position. The engine – “The Thisbe” – lay leaning heavily on its left on the first of the two spans which cross the meadow on the other side of the river from Shrewsbury. The first coach lies over on the left also, while the second carriage tilts to the right. Next to this coach is a Milk Van with its end telescoped into the carriage in front, and next comes the Guard’s Van leaning heavily on its right. Practically the whole of the train lies on the two centre arches which span the water, and we understand, some considerable difficulty is being experienced by the breakdown gang in getting at the engine to raise it, owing to the danger of taking the heavy crane-train on the two spans which intervene between terra-firma and the train.