Running trains was by no means the only source of revenue for the economy-conscious Shropshire & Montgomeryshire Railway.

Even during those halcyon days when the incomes of Colonel Stephens’ railways exceeded their expenses none of his lines were ever really able to consider themselves well off. This was not only apparent in their economical operating methods and rosters of secondhand stock but also in the ingenious ways that each of them found to cut costs and to find supplementary sources of income. Of all the Colonel’s lines the Shropshire & Montgomeryshire was perhaps the most inventive in this respect.

As early as 1912 the Shropshire & Montgomeryshire was showing a clear intention of making maximum use of its assets by letting out the shooting rights over the line to a Colonel Hall for £4.1O.Od pa. It would be interesting to know what steps were taken to prevent the running of the railway from interfering with the Colonel’s shooting or vice versa. No fatalities appear to have been occasioned so it must be assumed that a satisfactory modus vivendi was reached.

Shooting was not to be the only leisure pursuit promoted by the Shropshire & Montgomeryshire. From 1921 until the end of passenger services in 1933 the line’s handbills and tourist literature drew the public’s attention to the possibilities for boating and camping offered by the Railway’s boats and camping huts.

The boats consisted of two heavy ship’s dinghies and two light rowing skiffs. These were available at 6d per hour plus a further 6d per hour should the services of an oarsman be required. They were located at Crew Green on the Criggion Branch close to the confluence of the Rivers Severn and Vrynwy and just upstream from the Melverley Viaduct.

The camping huts were introduced for the 1922 season and seem to have been part of a job lot of surplus War Department equipment. They were most unusual circular huts, 15 ft in diameter, made of corrugated iron and making no conces¬sion to comfort beyond the fitting of a timber floor and central stove. Internal partitions made a semi-circular living room and two tiny Bedrooms. Today the Company would most certainly have been in breach of the Trade Descriptions Act in offering these as Commodious Camping Huts’.

Initially five huts were located at Crew Green, immediately behind the Goods Store and siding, in the field sloping down to the River Severn. A further hut stood in the field beside the Cafe at Criggion with two or three more close to Shrawardine Viaduct. Only those at Crew Green survived the first season, the one at Criggion later serving as a store for the cafe. An identical hut stood beside the platform at Shepherdswell on the East Kent Railway used originally as a waiting room but becoming a repository for mouldering waybills in later years until its final removal by British Railways.

The Crew Green huts were let throughout their time at 7/- per week, plus 10/- deposit on the key. Additional incentives were special season ticket rates to Shrewsbury whilst the 1922 handbill was particularly keen to draw attention to the many sports and pastimes of this pleasant Montgomeryshire outpost. Known as “Mushroom Terrace” from their black sides and round white roofs they were numbered 1 to 5 and for many years the month of August saw them occupied by the same families from Liverpool, Nottingham, Shrewsbury and Bloxwich. During the lean years of the early Thirties some of the huts were occupied throughout the year by homeless people of the locality and miserable they must have been without water or proper sanitation; at least one child is known to have died from malnutrition there. An “Elsan” at each end of the field completed the “Terrace”. 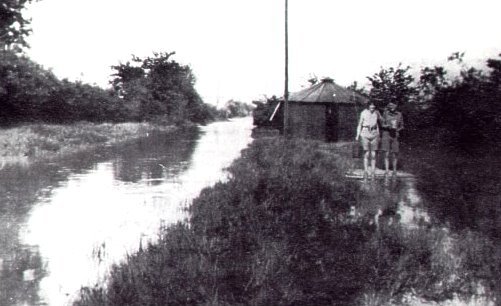 The railway is submerged ny floods.

The huts remained in use until the outbreak of war in 1939 although by that time parties arrived at Crew Green by road. However, “Gazelle” and the ex-Wolseley Siddeley railbus body were in great demand for excursions along the line and one stalwart schoolmaster brought a party of boys from Runcorn every summer by rail throughout to Crew Green. He was obviously a connoisseur of minor railways for it is still recalled that he and the boys would make day trips by train as far afield as Bishops Castle. All lettings ceased after 1939 and one by one they became casualties of the elements, finally disintegrating about 1945.

Responsibility for the management of the huts and boats rested with Mr John Turner of New House, Crew Green. Turner was not an employee of the Railway but combined the duties of District Traffic Agent with those of local carrier, coal and lime merchant and farmer whilst also serving on the parish council and as a magistrate. Mrs. Turner let rooms in New House and Colonel Stephens stayed there on several occasions. A renowned pastrycook, having at one time been in private service with Mr Palmer of Huntley & Palmers, it is recalled that she always baked large numbers of fruit tarts whenever Stephens was expected and he was never known to leave one uneaten.

The Turners’ nephew, Mr G.H. Williams remembered the Colonel’s visits very vividly from his military bearing and clipped speech. On one occasion Mr Williams was required to take Stephens from Crew Green to Llanymynech in his uncle’s six-seat brake and he was greatly impressed by the array of Cambrian top brass waiting to meet the Colonel to discuss some matter relating to the footbridge at the junc¬tion station there. It is notable that Stephens chose to travel in a hired brake rather than go to the expense of ordering a special train.

In 1930 the Company prevailed upon Mr Turner to lease the entire boat and camping enterprise from them for £10 pa. though he insisted that the boats and huts first be put into good repair. Whether this was done is not clear but the 1931 Directors’ Minutes report him as being no longer willing to continue at £10 pa although prepared to act as agent for the Railway at 15% commission. Mr Turner lived to be 98 and it is incredible to reflect that during his lifetime he saw the old “Potts” come and go, then the Shropshire & Montgomeryshire and finally the Railway controlled by the military.

It should not be imagined that the Railway’s ingenuity was confined to dabbling in the early package holiday business. Few stones were left unturned in the search for economies so that in 1930, for example, the Directors ordered engine drivers to avoid using the water tower at Shrewsbury except in emergencies as the Water Company was now metering the Shrewsbury supply. This appears to have led to a drastic depletion of the Railway’s water resources elsewhere as in 1932 the Directors had to order that the pool at Kinnerley be deepened and urged drivers to stop taking water from the brook!

In the meantime the Railway had sought to increase its dwindling traffic by purchasing a motorcycle for the line’s canvasser, Mr Jones. This machine cost the Company £16 but lest other employees should seek to follow Mr Jones’ example it was decided that he should maintain and insure it at his own expense! The only other form of road transport recorded in the Company’s annual returns at this time was a donkey which was employed at Kinnerley from 1929 to 1938 to haul the local parcel delivery cart and is still remembered with affection for the rides that he gave to village children in his field.

For all their ingenuity the Directors could not stave off the logical consequences of falling receipts forever. Passenger services ceased in 1933 though the Company continued to run specials at bank holidays and whenever else suitable opportunities arose. A recovery in demand for stone for road building enabled freight traffic to remain substan¬tial enough for the line to stay open until taken over by the Railway Executive at the outbreak of the Second World War with subsequent refurbish-ment under Army control. As a parting entrepreneurial move one of the last independent actions of the Directors was to let Shrewsbury Abbey waiting room to the A.R.P. for £1 a week. It’s an ill wind

This article by Stephen Garrett first appeared in The Tenterden Terrier