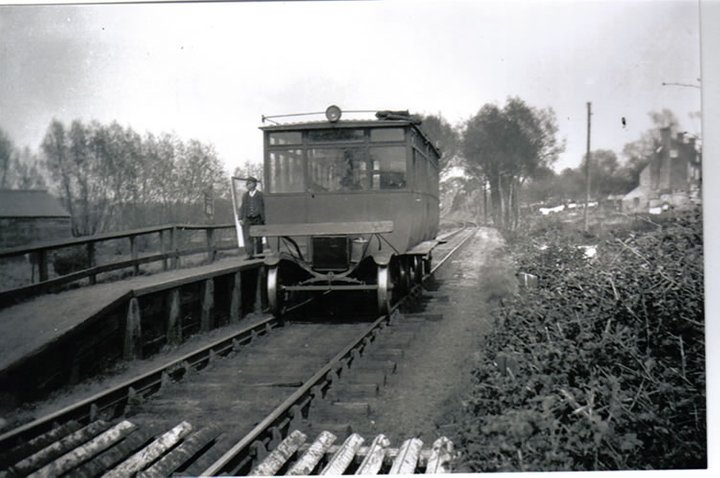 Photo of Railmotor at Junction Road in 1930

To their detriment historians often neglect searches of local papers, perhaps because of the time it takes. Occasionally by pure chance press cuttings come to light that are exceptionally interesting and one has recently turned up via a website dedicated to Bodiam Happenings. The cutting is reported to be from the "Southern Weekly News" or the "Evening Argus, and is dated 12 January 1929.

A smash occurred on Wednesday afternoon on the Kent and East Sussex Light Railway, when the Ford motor-buses which are sometimes run in the place of a steam train, jumped the rails between the Junction Holt and Robertsbridge Station, after they had just passed over the main Hastings to Hawkhurst Road.

It was the 3.24 train from Bodiam and there were two passengers, the guard, and the driver.  These buses are run two together, back to back, thus one pulls on the upward journey, and the other on the return.

On reaching the place of the accident the front motor-bus seemed to jump off the rails, and ran down the bank, turning a complete somersault, the wheels preventing the second bus from following.  The back of the front coach was torn out, thus uncoupling the join between the two.  There was not a sound piece of glass left on the bus, and the body and metal were wrecked to such an extent that a witness of the accident afterwards said that the only description that he could give was that it resembled a concertina.

The driver, who was lucky to escape with cuts and bruises, was unable to move until help was summoned, and then he crawled out, suffering badly from shock.

The two passengers, a gentleman and his wife were thrown about when the motor-bus turned on the side of the first coach, but were otherwise unhurt, as also was the guard, who was with them.

The guard, after assisting the driver to free himself from the wreckage, started to run to Bodiam Station, but a farm labourer who was working near, and had given assistance, recalled and reminded him of the telephone which runs from Udiam House to Bodiam Station.  The stationmaster called on the gangers, who were working near the station, and they went to the scene of the accident.

The two passengers who were catching a train at Robertsbridge Junction, were taken on the trolley, the lady at first refusing to go, but afterwards was persuaded to give way.

The line was cleared later in the evening, the first train running through to Robertsbridge about 8 0’clock.

On Thursday morning a breakdown train arrived with a crane, and lifted the last bus back on to the rails.  It was found that, except for the windows being smashed, very little damage was done to the coach.  The other was lifted on to the rails, where the engineers made the wheels fit to run.  All of the stray pieces of metal were placed in an empty truck.  The buses were taken to Rolvenden to the repairing and building sheds

Brian Janes comments that the accident seems to have gone unrecorded before. It seems to have taken place on 9 January 1929 at a period of extremely cold weather, indeed one of the most severe winters of the 20th century (press cuttings on the same website record snow and frost and in early February a great freeze that disabled a railmotor). The derailment seems to have occurred very near to Junction Road Halt, possibly at the points for the siding. There was a low embankment here that eventually led up to a bridge over the River Rother. The crew and passengers were very lucky to get off so lightly.

The service was a regular one for a Railmotor at this period and the fact that there are only two passengers on what was the busiest section of the railway shows why they were used at this time.

The speed with which the mess was cleared up would be an object lesson to railways in the present day, with only one train to Robertsbridge and two to Headcorn cancelled. There is a willingness to ‘get on with it’ and not cry over spilt milk. In the rapidly gathering dusk and then the dark the workers both freed the driver and dealt with the passengers but quickly got the trailing railmotor taken off the rails to clear the way. The breakdown crane that the Colonel had purchased from the Midland Railway in 1919 seems to have been very useful on this occasion being brought in the next day to retrieve the railmotors. The mythology of the railway than the crane only ever languishing in a siding at Rolvenden appears at least to be wrong on this occasion.

The railmotor is not identified but it may be that this accident was the beginning of the end of Ford Railmotor No 1, which was withdrawn rather earlier than No 2. I have previously surmised that this unit might have seen little use after the end 1929 and been withdrawn early because of mechanical shortcomings. The damage as reported was severe and it might seem unlikely that it would have justified extensive repair. Nonetheless repairs must have been made. In the only known photograph after this date the bodywork of No 1 looks intact and No 2 ran for another 10 years. Monty Baker who knew the railway intimately from the early thirties says that No 1 was worn out but the bodywork seemed sound. The body of one car of the first pair was eventually disposed of in 1932 and the second in 1935. Further, Railmotor mileage in 1929 was the second highest of any year when the Railmotors were running. The fact the railmotor set must have been returned to work quickly certainly shows tremendous work all round. Rolvenden was certainly as multi-skilled in those days as it is now.

The timing of the accident is interesting in that, although Stephens was looking at the cost of a new Railmotor before the accident, the Shefflex railmotor set was not ordered till some time in 1929 .Certainly the whole incident may explain why the Shefflex set, which had been ordered in the name of the Shropshire and Montgomeryshire (Order Numbers 2058 and 2059), came to the K&ESR instead.

Finally I do cherish the image of the husband and wife passengers travelling, on a bitter January afternoon, the 3 miles to Robertsbridge on an open permanent way trolley. Our ancestors were made of tough stuff.