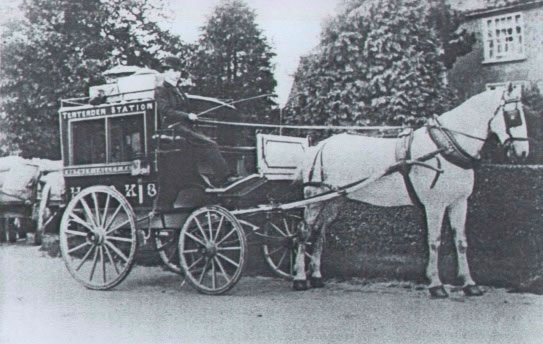 The Rother Valley Railway opened their extension from Rolvenden to Tenterden Town in March 1903. It is almost certain that the horse bus operated from that date, providing a local taxi and parcels/luggage delivery service around the town and immediate neighbourhood. The bus was probably built towards the end of 1902 by W.J. Mercer at their ‘Tenterden Carriage-works’. It was operated from new under contract to the railway by William Hook & Son a local contractor and haulier who also traded in china and glass. Early photographs show the lettering Rother Valley Railway” in the waist panels of the horse bus, with the word “HOOKS” in large ornate lettering in the lower panels.

From 1st June 1904, the R.V.R. became known as the Kent & East Sussex Railway, and the lettering on the horse bus was changed accordingly.

The bus was not used to connect Rolvenden with Tenterden as often stated. That service was operated by Bennett & Co, who provided horse bus services from Tenterden to Maidstone, Ashford, Rye, Hawkhurst, Cranbrook etc. until the early years of the 20th century.

The horse bus continued to be operated by Hooks until 1916 when the firm ceased trading. As no one else would take over the contract, Colonel Stephens purchased the haulage side of the business and also took over the stables at the top of Station Road, Tenterden, which now house the Town Museum. Apart from the horse bus, Stephens seems to have taken over a horse-drawn van and two drays and these were operated by railway employees from 1916. 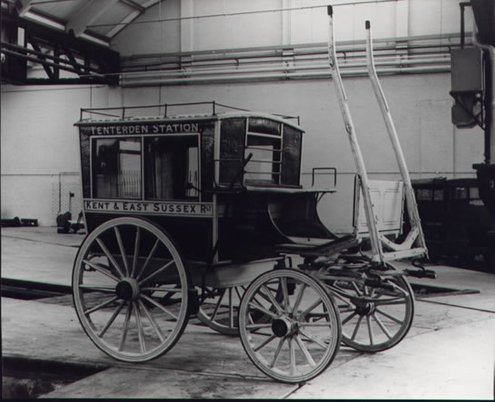 It is almost certain that the regular driver for the horse bus from 1903 until its retirement in 1924 was a Mr Frank Clark. He stated in an interview in the 1950s that he had been the driver for over 20 years. The driver of the van was a Mr Tom Beech.

The bus was withdrawn in 1924, a time when passenger traffic was shrinking dramatically, and the railway concentrated on provided goods delivery services only. The bus was stored in the stables building and remained there until 1948 when it became the property of British Railways upon nationalisation.

By the 1930s, the railway was experiencing increasing difficulty over the supply of horses. As a result, the horse-drawn vehicles were replaced by Bedford lorries, the first arriving in 1936 and the second in 1937. These continued in service during W.W.2 and were probably scrapped following nationalisation.

This article is based on notes prepared by John Miller