Ticket Issue on the RVR 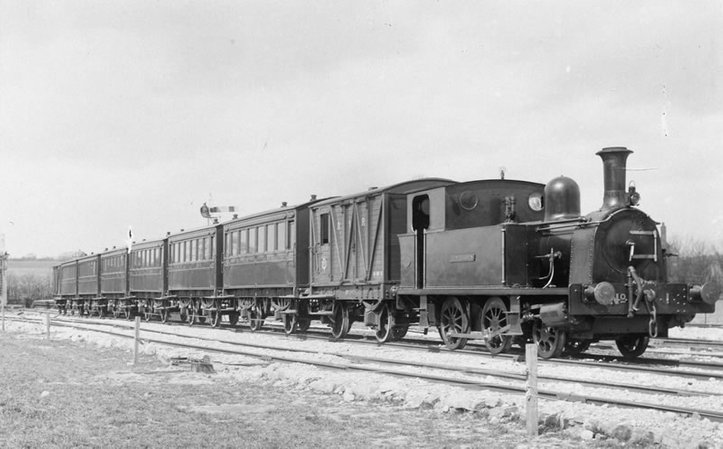 When Stephens built the Rother Valley he followed true light railway principles and kept everything to a minimum. This included not only small four wheeled carriages but also the absence of manned ticket offices at stations. Paper tramway style tickets were issued by the guard and tickets seemingly only issued on the train. The early carriages had an open layout internally but no corridor or any other connection. The issuing of tickets on the move had to be accomplished by staff swinging out of the end doors, stepping between the carriages using the outside footboards (which were specially extended on the original stock) and striding the gap.

For the first three years of operation this practice went unnoticed but, perhaps typically, a middle class gentleman, Guy Ewing, a land agent of Tunbridge Wells, poked his nose in and wrote to the Major Pringle of the Railway Inspectorate on 5 February 1903 as follows

‘We heard yesterday when travelling on this line, that you were down the day before to inspect the extension from present station to one nearer the Town.  In passing from Robertsbridge up the line, you can hardly have failed to notice what we regard as a most dangerous practice, which would not be permitted on any other line under any circumstances.  Not only is it unnerving to passengers to see a man walking along the footboard from carriage to carriage, but we regard it as a highly dangerous practice, and venture to think the Company should not be permitted to call upon their servant, the Guard, to do so.  Why can not tickets be issued at the stations as on other lines, or in the alternative have corridor carriages so that the man can walk along without risking his life on the footboard, particularly in wintry weather.’

This was passed to the administrators in the Board of Trade (who oversaw railway operation). The BoT official thought it should be looked into and wrote to Stephens as Managing director. He replied, in his usual hasty scrawl, on 13 February saying:

‘Eight of our nine carriages on this light railway are constructed internally on the corridor principle.  No danger is feared from the guards following the universal continental practice of getting from one carriage to the other as the steps are adapted for this purpose.  The practice has been in use for nearly three years without accident or complaint and the traffic does not justify the employment of persons capable of issuing tickets at the various stopping places.

As a result the BoT asked for a meeting which Stephens attended. Although one suspects Stephens felt he was on weak ground as always he defended his practices vigorously, in particular citing that it was a regular continental practice and that the staff were quite safe when passing through each carriage as they were constructed on the corridor principle (then of course a great rarity away from expresses) at least internally, with good footboards and internally opening outer doors. Very interestingly for the historian, he supplied a drawing of a complete train with its internal layout, which by this time consisted of sundry four wheelers.

One would like to have been a fly on the wall in this meeting, the record of which has regrettably not survived. Arguments resting on how many feet and inches were safe to step over the gap between two carriage footboards, 6 inches wide, rocking at 25 mph, 3 feet above the track are bad enough ,but what about the discussion of the technique need to open a door in these circumstances. And was there a concession for frosty weather Mr Ewing had mentioned? Edwardian railwaymen were a hardy race.

At any event Stephens conceded several points about footboards, doors and handrails. Most importantly he reported on 22nd September that arrangements had also been made to issue tickets from the stations at Bodiam, Northiam, Tenterden Town (just opened), and partially at Rolvenden. And he confirmed on 28th June 1904 that passengers could book at all stations except Robertsbridge and Junction Road. When the Headcorn extension was built ticket offices were provided from the outset, the extra staffing costs presumably offsetting the hassle factor, although in most cases manning was essential for the vital goods and parcels anyway.

This belated opening of ticket offices is interesting because the original plans of the Rother Valley buildings all show ticket offices. However surviving card tickets of the conventional Edmondson type seem onlyto have been issued after the time of the extension to Tenterden Town in 1903.

This correspondence and the meetings also seem to have triggered work on rolling stock. The Board of Trade had asked for through corridors on all new stock. By mid-1904 six of the original carriages had been converted into three longer ones on new bogie underframes.

There was no end connection but Stephens claimed that a train, as a rule, consisted of two cars so the need to go between cars was minimal. This rebuilding of the six original, lightly built, four wheelers as corridor bogie coaches by Pickering’s (the Builders) was a more complex job than the simple placing of bodies on a new chassis because brake ends were provided on two of them rather than continuing to use the existing separate brake vans. This change in operating practice made a little more sense of the order for more purpose built bogie coaches ( again with no end connection) from Pickering in 1905 for the Headcorn extension. In the event these coaches were little used.

By 1904 however the BoT had been satisfied and had walked away contented. Stephens happily continued in his own way. With capital short he now settled for ex mainline coaches, and from around 1911 he bought more so that he could provide steam heating. The model bogie coaches he had made so much of a few years earlier were sold back to the makers in 1909/10 and one transferred to the East Kent Light with the rebuilds pushed into sidings for use on market days only. Stephens did put fall plates and end doors into his railcars and paper tickets continued to be issued for many years. And ticket inspection, with the occasional issue for halts, continued on steam trains in the same old hazardous way.

Stephens and his successors happily got their staff to continue this dangerous practice –very possibly until the arrival of real corridor coaches in the mid-40s. Fortunately there were no known injuries although there was a tale that came out many years later that some poor individual had been jarred off the footboards at night and, just to double the hazard, the train had to be backed up to find him. He was found safe, but well scratched, in a bramble patch.