During the 1920’s the railways of Britain were suffer¬ing from an acute lack of funds brought about by increasing road competition, the after effects of the 1914-18 war, and the trade depres¬sion. The light railways controlled by Colonel Stephens, which were worked on a shoe string at the best of times, suffered more than most, and sought means of reducing their operating costs. The answer was then as it would be now—internal combustion engined railcars which could be operated by one man and which did not consume expensive fuel during the idle periods of a rather infrequent passenger service.

The first railcar appears to have been introduced by the Weston Clevedon and Portishead Railway in 1921, and was a small four-wheeled Drewry car said to be 16 ft. 3 in. long in the body and 19 ft. overall. It seated 3o passengers, but this could be augmented by the use of a very small four-wheeled trailer seating another 24, and shown in Fig. 1. It worked successfully on the Weston-Clevedon section for several years until it was replaced in 1934 by another rather larger Drewry car obtained second-hand from the Southern Railway. A drawing and photograph of this car can be found in an article by Mr. R. E. Tustin in the October 1948 issue of the Model Railway Constructor.

A railcar of a very different kind appeared on the Shropshire and Montgomeryshire Railway, and became the prototype of a family of railcars which was used on several of the Colonel Stephens lines. Built by Edmunds of Thetford, it com¬prised a pair of vehicles with small saloon bodies mounted on Ford bus chassis coupled back-to-back: a matching trailer could be coupled between them if required. In use only the leading vehicle was powered, the other acting as a trailer.

Very similar Ford sets, but with¬out the matching trailer, were intro¬duced on the West Sussex and Kent and East Sussex Railways in 1923. The K.E.S.R. set is illustrated in Fig. 2 and the second drawing. It had 2 ft. 6 in. diameter disc wheels, a very rudimentary form of buffer beam, and the roof was fitted with a luggage rack!

The Shropshire and Montgomery¬shire Railway also had a twin-car set with Wolseley-Siddeley engines built about 1923, and the West Sussex and Kent and East Sussex Railways sets built by Shefflex Motors of Sheffield in 1928 and 1930.

The West Sussex set is illustrated in Fig. 3 and the K.E.S.R. set in Fig. 4 and the first drawing. They were of generally similar design apart from the roof. The K. & E.S.R. set had some rather interesting features, such as I heating system employing pipe; round the saloon through which the exhaust circulated, and a whistle also operated by the exhaust. A small four-wheeled wagon with inside bearings was sometime: coupled between the cars, or at one end, as seen in the photograph. A similar wagon was used on the other lines with two-car railcar sets.

The livery of the W. C. & P. Drewry cars was dark green, and the others appears to have been buff or brown. The K. & E.S.R. Shefflex cars seem to have been the only ones with any numbering, and these were numbered at one time 2 (on both cars!) and at another time, 3. Why, I do not know. 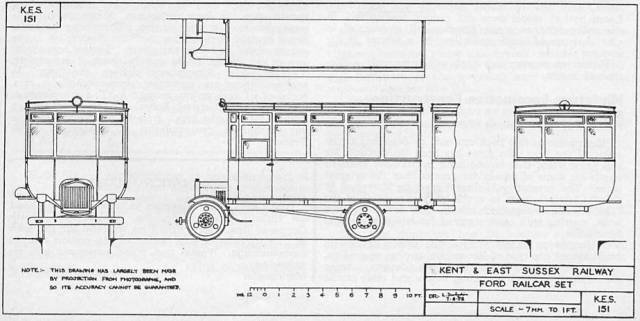 Any of these cars would make excwllent modelling subjects in 4 mm. scale they could use TT wheels, but in 7 mm. scale, scratch built ones would probably be required. I would make the chassis of metal to keep the centre of gravity down, and build the body of Plastikard over a thin Perspex box to give rigidity above the waist, where it is almost all window. It should not be too difficult to fit a small motor at floor level driving on to the back axle of one of the cars. If an insulated coupling were used, pick-up could be arranged easily by insulating the wheels on one side of each car only. Note that this must be the same side of each car so that when coupled back-to-back, the insulated wheels are on opposite rails. The motor is then connected between the two chassis, using a flexible wire across the coupling.