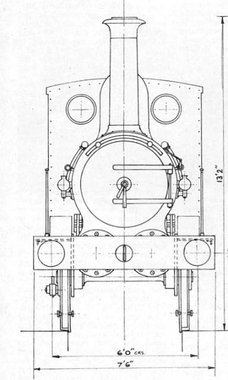 The "Ilfracombe goods" or "282" class of 0-6-0's originated in 1873 with three loco­motives supplied by Beyer, Peacock and Co. for the London and South Western Railway's Barnstaple to Ilfracombe line. Numbered 282­284, they were augmented by two more (Nos. 300 and 301) in 1874, another one (No. 324) in 1875 and a final two (Nos. 393 and 394) in 1880. The class provided a useful source of motive power for the Colonel Stephens group of light railways from 1910 onwards, no less than six of the eight finding their way on to these lines. The Shrop­shire and Montgomeryshire Railway had three, the Kent and East Sussex two, and the East Kent one: all but the E.K.R. example had been quite extensively rebuilt by this time.

This month, my drawings show the original condition of the first six locomotives. I feel a little guilty about including them in this series, as even the East Kent locomotive differed somewhat from the draw­ings. However, as I had access to the maker's drawings and as one of the class in its original condition would make such a delightful model, I decided to include it.

The locomotives were of a standard Beyer, Peacock design, with typical Beyer features such as an elegant copper-capped chimney and open brass-rimmed splashers incorporating the works plates. The boiler was of the "straight-back" type: a dome situated over the firebox carried a pair of Salter spring balance safety valves. A small and rather spartan cab was fitted, with rectangular side sheets making the splashers over the trailing wheels. The leading buffers were of padded leather, which must have been well out of date even in 1873. The wooden brake shoes acted on all wheels and were worked by hand only.

The tender was extremely small, on four wheels, and carried only two tons of coal and 1,000 gallons of water. It was braked by wooden brake shoes, as on the engine, The final two locomotives, which were built in 188o under the Adams regime, differed slightly from the others. Thicker tyres increased the wheel diameter to 4 ft. 7½ in., stove­pipe chimneys were fitted, and the leather buffers were replaced by wrought iron ones. Metal brake shoes were employed, and larger sandboxes placed above the running plate near the front buffer beam.

Apart from the substitution of six-wheeled tenders for the original four-wheeled ones in the 1890's, and the fitting of Drummond type safety valves on top of the dome in 1900, these two were not altered and one of them (No. 394) went to the East Kent Railway as No. 3 in 1918, still in L.S.W.R. livery.

The others were rebuilt with larger boilers and many other alterations which completely altered their appearance. 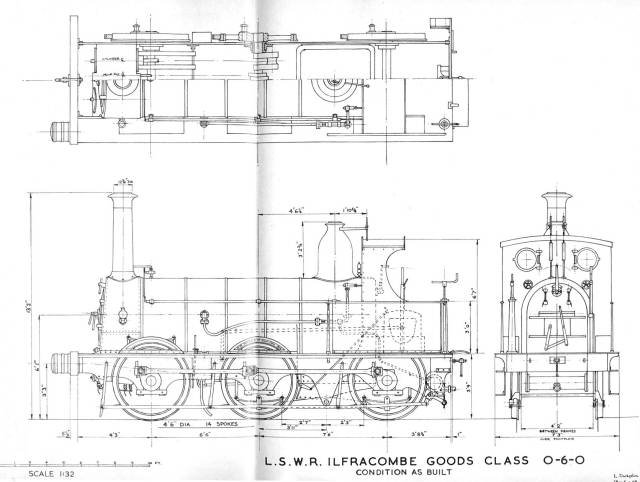 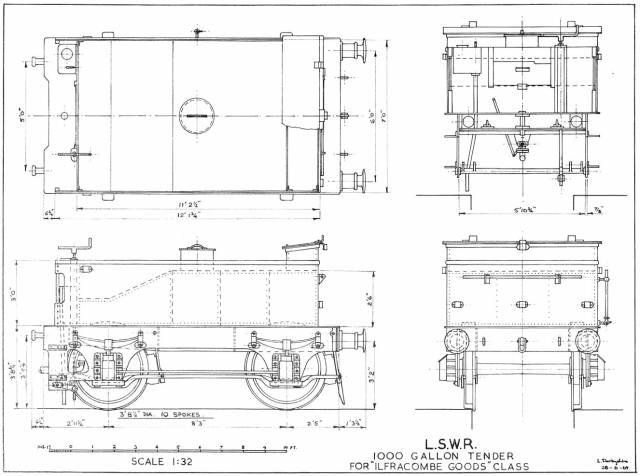 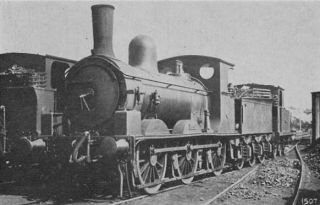 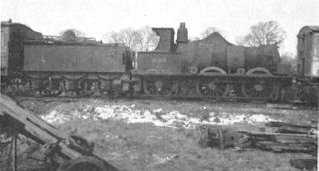 From 1888 onwards, the first six "Ilfracombe Goods" were extensively rebuilt by Adams, who had succeeded W. G. Beattie as Mechanical Engineer of the L.S.W.R. in 1878. The rebuilding included the modifications applied to the final two members of the class (4 ft. 7 in. wheels, stovepipe chimneys, metal buffers and brake shoes, and sandboxes above the footplate) but went much further, as new, larger boilers were fitted and the cabs increased in size. The boilers had domes in the con­ventional position, with the safety valves over the firebox. At the time of the rebuild, or shortly afterwards, six-wheeled tenders were fitted in place of the original four-wheeled ones. These tenders came from earlier Beattie locomotives, and were not all exactly alike.

With five identical engines and one mechanically similar, Colonel Stephens managed to achieve a certain amount of standardisation of motive power. Under their new owners the engines gave excellent service and were good value for money—the total cost of the six was £4,200. Curiously enough, the unrebuilt one (which went to the E.K.R.) was the most expensive at £1,000, the three 1914 sales being only £600 each.

The drawing shows "Hesperus" as bought in 1910. It was later fitted with cast iron nameplates instead of the painted-on name, as were all the others, except E.K.R. No. 3. For some reason or other, the East Kent, alone of the Colonel Stephens light railways, never named its engines. The other engines were not absolutely identical to "Hesperus," although at first sight one would think they were. For example, "Juno" of the K. & E.S.R. had a steel front buffer beam in place of the original wooden one, and taper shank front buffers. It also had the smokebox door hung from the left-hand side (looking at the front) instead of the right. I cannot recall seeing this on any other engine. Per­haps "Juno" had an accident which damaged the front end at some time. The chimneys were also not ident­ical. "Hesperus," "Rother" and "Juno" had chimneys 3 ft. 9 in. high, but that one "Thisbe" was about 4 ft, o in., and on E.K.R. No. 3, about 4 ft. 6 in. I do not know about "Pyramus," as I have no photograph of that one. Perhaps a reader will be able to help on this point.

Now a word on the liveries applies to the class. "Hesperus" was painted dark green with light green lining at Eastleigh before delivery to the S. & M.R. "Rother" and "Juno," and probably "Pyramus" and "Thisbe," were painted dark blue with red lining. East Kent No. 3 was delivered still in L.S.W.R. livery, still numbered 394, the underlining, like the prefix "o," indicating duplication. This livery lasted several years, and even then the only change was the changing of "L.S.W.R." to "E.K.R." on the tender. This was done in the easiest way possible—the "L" was turned into an "E," "SW" was painted out and replaced by "K," and the "R" was left alone! While on the subject of liveries, a corres­pondent tells me that S. & M.R. No, 2 "Severn," described above, was probably painted dark green and not blue. By the early 1930's, the livery was described as "dark soot with bright rust lining."

Modellers should find nothing really difficult about these engines, either in original or rebuilt form. The boilers are rather small for a motor of reasonable size, and I would suggest that a motor in the tender, with flywheel, and with flexible drive to the engine would give best results for the more experienced modeller. Messrs. Stubbs and Pochin of the Man­chester M.R.S. have built very similar locomotives in EM using this technique, with excellent results. The less experienced modeller, or those who do not mind losing the daylight under the boiler, would find no difficulty in fitting a small motor into the engine.

Finally, for the record, the full list of the class is as follows. The dates headed "Broken Up" are approximate, as scrapping usually took several years! 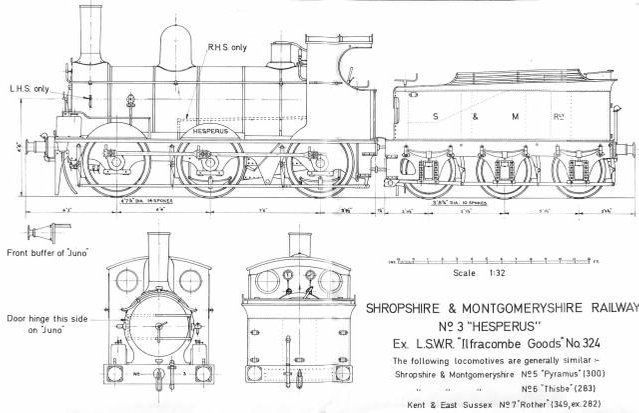 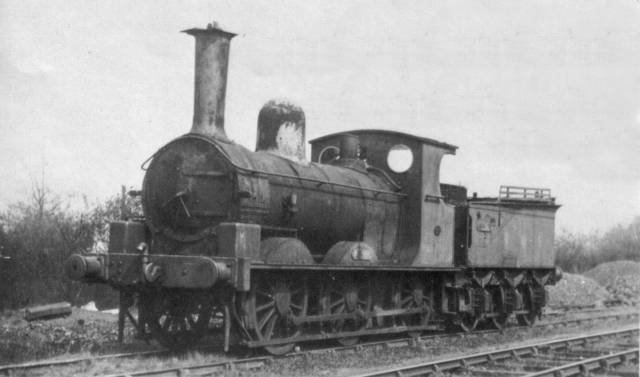