For the opening of the Rother Valley Railway in 1900, Messrs. Hurst, Nelson & Co. of Motherwell supplied six four-wheeled coaches. Of these, Numbers 1-4 were third class with 32 seats arranged transversely with a central gangway and doors at each end. Numbers s and 6 were externally identical to Numbers 1-4, but were divided into two compartments by a central partition with a glazed door. They seated 28, the seats being arranged along the sides of each compartment.

All six vehicles were finished in varnished teak, lettered in gold leaf as shown on the drawing. Note that the wheels were of the open-spoked variety, and of a size usually used on goods wagons.

These coaches were later re¬built as bogie vehicles, by mount¬ing the bodies in pairs on new underframes, and can be seen in this condition in one of the photographs published in last month's article. It has been said that the resulting bogie coaches were numbered 16-18, but I have been unable to find any evidence to substantiate this. As yet, I have not found sufficient inform¬ation to produce accurate draw¬ings of these coaches: if any reader can help in this respect, I will be most grateful.

The coaches in their four-wheeled guise would be relatively simple subjects for modelling. Their flat sides would lend them to the type of construction using Perspex for the entire area, with card overlays. Wagon wheels could be used, or open-spoked ones could be molded using the techniques described by C. J. Binnie in recent issues of M.R.N. 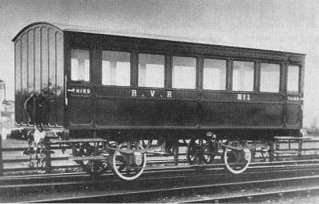 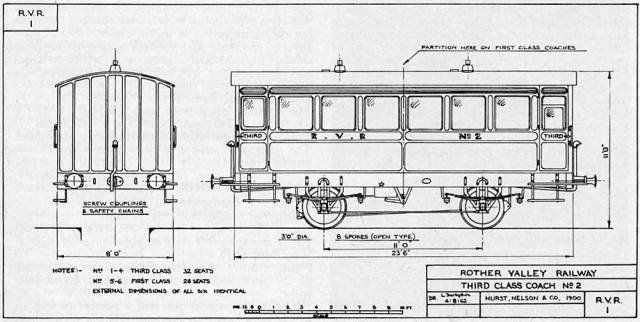 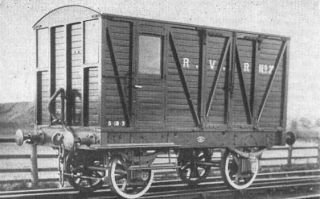 The other photograph shows one of the ten open wagons supplied to the R.V.R. by Hurst, Nelson. I have not drawn one of these, as they were of standard design, and all the details may be gleaned from the photograph. The livery was probably light grey. There was also one cattle truck, but I have been unable to find any details of this. The wagons lasted into K.&E.S.R. days, but by then the lettering seems to have vanished.

Many South Eastern Railway vehicles worked on the line from its opening, including the box van and round-ended open wagon, which are both available to 4 mm. modellers as K's kits. Private Owners were represented by "Rother Vale" also  "Amal¬gamated Anthracite" wagons ap¬pear to have been quite common.

The Rother Valley Railway possessed two brake vans, which were used on both passenger and goods trains, and which form the subject of this month's drawing. They were numbered 7 and 8, and were originally lettered as shown in the photograph. The style shown on the drawing, with the number in a garter on the door, was apparently applied soon after delivery. Like the coaches (above) they came from Hurst, Nelson and Com¬pany, and appear to have matched them in livery, that is, varnished teak. I have never seen a photograph showing them in Kent and East Sussex Railway livery, so they may not have lasted very long. Some ex-Great Eastern Railway third brakes were acquired during RotherValley times and these were probably used instead. 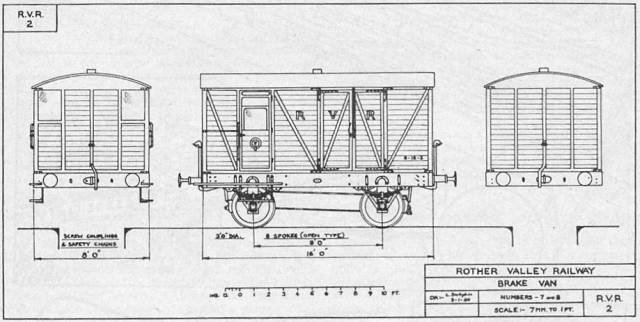