Pickering coaches of the K&ESLR and EKR 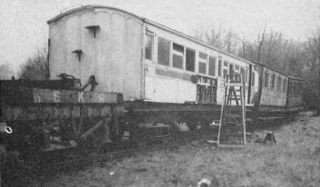 Fig. 2 The East Kent coach at Sheperdswell about 1947 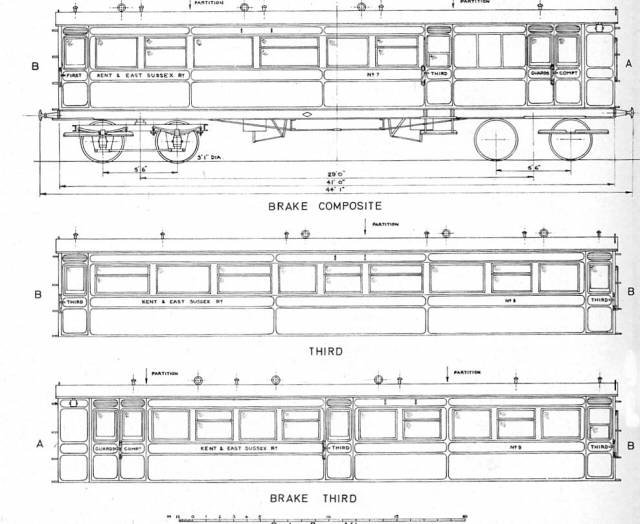 The fate of the brake-third coach is obscure. I have not seen a photo¬graph of it (or any of the others for that matter) dated later than about 1936. However, when the East Kent Railway started its passenger service in 1916, it used a coach which was almost identical to the K. & E.S. brake third and may well have been the same one. Per¬haps a reader can provide more in¬formation on this point. The E K.R. coach was also painted in brown and cream, though by 1946 this had changed to light grey. Itwas finally broken up in t948 after Nationalisation, and is illustrated in Fig. 2 shortly before this event.

Modelling the coaches would not be quite as easy as it appears at first sight. The flat sided bodies are basically simple and could be built on a perspex foundation for strength, but the rather complex panelling would be quite a head¬ache - at least I found it so when drawing it. The varying dimen¬sions of window apertures and panels would prevent very extensive "tooling up," though a punch for the rounded corners of the panels would be very useful. The bogies would have to be specially made, though wagon disc wheels would be the right size.

I would like to thank Mr. R. E. Tustin of Leicester for supplying a copy of the L.M.R. drawing of tool van No. 1 Mr. A. Black¬burn of Havant for that of No. 111, and above all the unknown draughtsman of No. 1 R.T.C. Longmoor who, in wartime, found time to draw these vehicles and enabled me to produce this article nearly 30 years later

In anticipation of the building of the extension to Maidstone the K. & E.S.R. ordered a powerful new locomotive from R. W. Hawthorne Leslie of Newcastle, and a set of bogie coaches from R. Y. Pickering of Glasgow, both being delivered in 1904, and, like the loco¬motive, little used by the original owners.

The set comprised three bogie coaches, each 41 ft. long x 8 ft. wide with rather small bogies of 5 ft. 6 in. wheelbase. Wheel diameter was also rather small, at 3 ft. t in. The coaches were, respectively, a brake composite, an all third and a brake third. Their numbering is not known for certain, and that shown on the drawings is a sug¬gestion only. Careful study of the original of Fig. t shows that the numbers had one digit only, so with the original RotherValley coaches being numbered 1 to 6, 7 to 9 seems a reasonable guess for the new ones. Their livery was chocolate and cream, with black below floor level and (when new) white tyres.

As can be seen from the draw¬ings, the windows varied in width in a rather peculiar manner. The tops of some of them hinged in¬wards to provide ventilation, which was augmented by torpedo venti¬lators on the roof. Lighting was by acetylene gas, and vacuum brakes were fitted.

When the line for which these coaches were built did not materi¬alise, the K. & E.S. sold two of them (the brake-composite and all-third) in 1909 to the Woolmer In¬structional Military Railway in Hampshire, later to be known as the Longmoor Military Railway. There they remained until at least t940, when the Army authorities had them drawn up, a most fortu¬nate occurrence, and particularly remarkable considering that the Battle of Britain was just starting and Dunkirk had not long since taken place! By then, the brake composite had been converted into a tool van complete with compart¬ments for blacksmiths, carpenters and fitters, and was numbered 110. The all-third became L.M.R. No. 111 and became a saloon with end windows and a folding table in the centre.