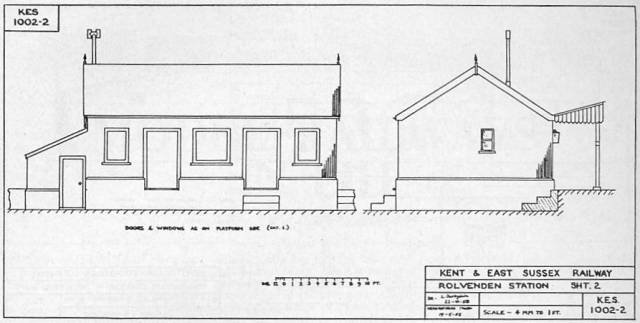 Rolvenden station possesses (or rather possessed) all the features which go to make an attractive model - a short single platform, a locomotive shed and works, a car­riage shed, level crossing, and assorted sidings. It could be modelled as either a through station or as a terminus, as it has a run-round loop. In fact, it originally was a terminus before the Rother Valley Railway was extended to Tenterden in 1903, and it is shown in this form in No. 3 photograph.

The carriage shed was added some time before 1908 and, later still, the three "dump" sidings were built. On these, assorted loco­motives and rolling stock could be found during the 1930's in various stages of decay

The first drawing depicts the layout at this time, when the rail¬way was at its most interesting stage. Although very simple, the station would require a space of 12 ft. x 3 ft. in 4 mm. scale—so much for those who expect to model Clapham Junction on a 6 ft. x 4 ft. board! However, by judicious pruning, Rolvenden could probably come down to 8 ft. X 2 ft. without losing too much of the atmosphere of the original.

The other drawings show the station buildings. The main build¬ing, which incorporated a waiting room, booking office and the "usual offices," was constructed of cor¬rugated iron and remained un¬altered throughout the history of the line. Alongside it was another cor¬rugated iron building, the "Printer's Hut," so called because it was used for printing the paper-work for the various Colonel Stephens lines.

The photographs show the curious raised portion at one end of the platform—I do not know its purpose—and, the view looking towards the level crossing shows the start of a curve which extends for rather more than 90 degrees, in true model railway fashion, before climbing for more than a mile at I in 25 to Tenterden. Incidentally, the signal shown in the plan by the level crossing was rather peculiar in that it faced towards Tenterden, and thus did not protect the crossing; it was moved to the more conventional position on the other side of the road after Nationalisation! 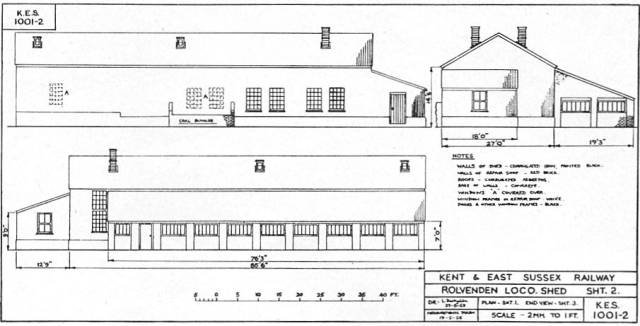 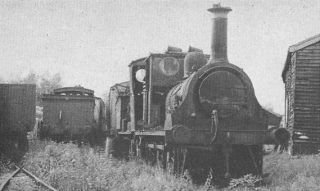 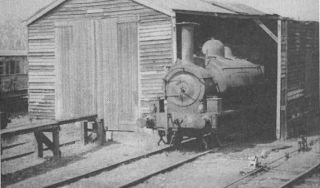 The original locomotive shed at Rolvenden was quite small, with a curved roof as shown in the photograph above, but this structure was soon replaced by a rather larger and more imposing shed, which is shown in this month's drawings. It was large enough to hold about six locomotives, none of those on the K.E.S.R. being very large, and was clad in that ubiquitous material, corrugated iron. Alongside was a brick-built workshop, which was well-equipped and capable of carrying out major overhauls and even complete rebuilds. Colonel Stephens' railways were certainly self sufficient

Between the shed itself and the platform road was an odd assort¬ment of coal bunkers and water towers. By the 1950's, these had been demolished and replaced by a tank at the platform end, sup¬ported on concrete columns, which occupied the site of an earlier tower on brick piers.

The carriage shed is shown in the photograph (left). It was a simple timber structure with a lean-to extension on one side, covering a second track. Outside were two elevated walk-ways, built of old sleepers, and presumably for car­riage maintenance.

The picture above left shows the appearance of the "dump" sidings in about 1933. The locomotives are Terrier No. 5 Rolvenden and Ilfracombe Goods No. 7 Rother, with No. 9 Juno, all in various stages of decay.

The whole station would make a really delightful model, particularly in 4 mm. scale. As suggested above, it could be somewhat re¬duced in size without losing its character—the engine shed could be shortened a little, and the sidings reduced in length and number. However, this should not be over¬done, as the station's charm lies partly in its sprawling nature. In particular, at least two of the dump sidings should be retained, both to give the model its true light railway character, and to give a good excuse for using one's less successful modelling efforts!

The various buildings could be easily made using the usual wood and card construction plus a gener¬ous amount of Slater's "corrugated iron." The most difficult part of the model to make would probably be the long grass growing in the sidings. I have not yet discovered a really effective way of modelling this—the usual sawdust, tea leaves, etc., are not quite right, as the "grass" needs to be ¼ in. to in high in ½ in. scale. If anyone knows the answer to this one, and has a patent grass-growing tech¬nique, I have no doubt that the Editor would be pleased to publish it.