Through virtually all of the 19th century the BP&GV and its predecessor canal had only been concerned with transporting coal. But with the coming century something better was needed and eventually came with a reconstruction for passenger traffic under the able guidance of Holman Stephens.

A move to provide some sort of passenger service was made in 1898 when agreement was reached with two colliery companies to run a colliers service. The Colliery Companies that as the railway was in the hands of a Receiver they should each purchase a railway coach and hire them out to the railway company, who agreed that, when the Receivership was discharged, they would purchase the carriages from the Colliery Companies at cost price.

These collieries bought the two coaches from the Ashbury Railway Carriage Company, Birmingham. They were mounted on double bogies, with frames of iron and teak, 46 feet 2 inches over all, double matchboarded sides, with a centre seat running lengthways down the centre of the ouch. They had four doors, two at each end, to enable the colliers to get in and out quickly. They were complete with brakes and lamps. The cost was £350 delivered at Burry Port. Although these coaches are thought to have been used until the railway formally opened for passenger traffic in 1909 they do not seem to have passed to the company. Their fate is not known for certain but in February the General Manager, Arthur Morgan, was authorised to buy two ‘Colliery Coaches’ for £5 each for use as shelters and it may be that these were they.

One further coach was available for use before the main passenger era. In November1904 one of the Lambourn Valley railways nice little balcony 4 wheelers was bought at auction came to the railway. (The other three eventually went to Stephens’ Selsey line). Its use is unknown but it was listed in statistical returns from 30th June 1905 rightly as a composite coach and stayed in the passenger list till June 1912 when it became an inspection saloon. It seems to have been reinstated to the passenger stock during WW1 and was in the returns from then till grouping. It lasted until 1925 around which time most of the BPGV carriages were withdrawn.

With increasing need for a passenger service Morgan had been searching for suitable coaches but with the arrival on the scene of Stephens he consulted him and turned to the Metropolitan Railway for ten of their stored 8 wheelers. 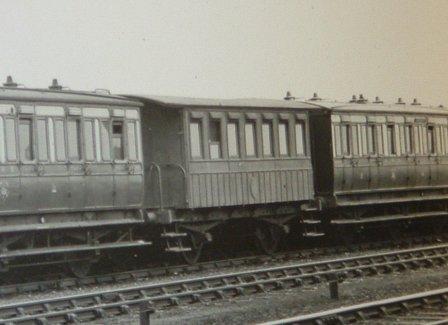 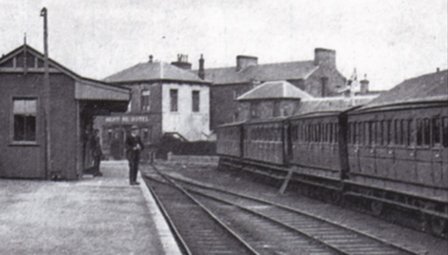 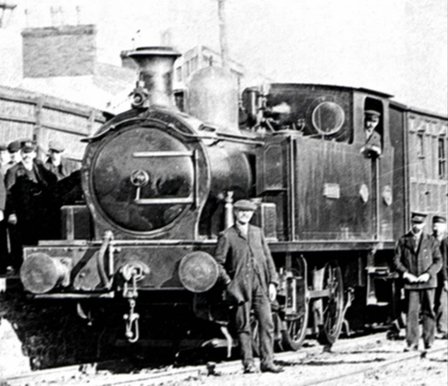 These carriages although often described as ‘rigid ‘ were from the later batches in which the two inner axles were fixed but the outer two were carried in the form of a pony truck which swung about a pivot over the inner axle. The coaches that first came to the Burry Port were probably from coaches displaced after electrification but later coaches were probably some of the 76 retained by the Met, but which were dispersed as new coaches were introduced. Morgan was authorised to buy 10 in November 1908 for £600 but they needed extensive renovation at a cost of £700. At first repair by the ‘Gloucestershire Carriage Company’ was proposed but the work was eventually done by the Met itself. They were paid for in March and delivered by July. Stephens’s precise role in the acquisition of BPGV rolling stock is uncertain. However the timing of the successful search for and purchase of Met stock and its fitting with acetylene light is so typical of Stephens that I feel he was the principal instigator with Morgan negotiating the financial arrangements.

The purchase of three more coaches from the Met was authorised with opening in August. However urgency may have indicated a change of supplier for three 4 wheeled LSWR coaches were purchased in October 1912 that will have arrived soon after. These coaches were supplied via the agents Edmunds & Radley of Cardiff and the price paid for the last three was £91 each. They were numbered 11 - 13. The carriages were almost certainly LSWR Diagram 2078 and had been built in 1876. The Metropolitan Carriage and Wagon Co had built twenty of these as short (28’6” against the 28’1” quoted in GWR records) six wheeled 5 compartment 2nds. Several had been downgraded to 3rds at about the turn of the Century and at least three others converted to three compartment 3rd brakes. Two of the latter (LSWR Nos 309 and 416) survived long enough to have been the BPGV brake carriages. Again the Stephens connection is apparent as they were fitted with acetylene lighting and he bought batches of LSWR coaches around this time for his other railways.

More Metropolitan Coaches may have arrived as traffic and availability dictated. One may have arrived in 1911 but does not seem to have been authorised by the Board till January 1914. Further batches were authorised in December 1913 (3 at £91) and July 1914 (three at £55 retrospectively agreed and two more approved).However it is by no means certain that these coaches actually arrived as at Grouping only 10 Met. coaches were listed; Nos 1-4 in ordinary service and 6-10 for colliers.

In 1920 with traffic still expanding the railway took advantage of the clear out of stock on the North London Railway in the wake of the delayed electrification and bought 5 of their 4 wheelers, 4 5 compartment thirds and a 3 compartment brake all freshly overhauled and fitted with electric light.

Finally the railway had an ex GER 4 wheeled full brake that had been converted by grouping to a tool and packing van. No acquisition date is known although Board minutes refer to the purchase of ‘1 goods brake for £36’ in October 1912 that may have been this vehicle.

All of the Carriages were taken over by the GWR but some were in ruinous condition and none lasted long, the GWR drafting in standard 4 wheelers to replace them.

By the time Stephens commenced reconstruction the Railway had been nicely re-equipped with engines for coal hauling. Over the preceding 8 years some good engines from Avonside and Chapman and Furneaux (who had been absorbed in 1902 by Stephens’s favourite supplier of new engines Hawthorn Leslie) had entered service. With reconstruction the directors went out to tender for a new passenger engine probably using a specification influenced by Stephens, for the dimensions of the new engine were an enlargement of that specified by Stephens for the contemporaneous passenger engine for the PDSWJR having the same cylinders as the larger 0-6-2Ts. Outside cylinder passenger 0-6-0Ts were rare for passenger engines at any time and almost unheard of in Edwardian times.

Unusually for Stephens and obviously under the Board’s direct supervision the successful tenderer in November 1908 was Hudswell Clarke who delivered the smartly red painted No 8 Pioneer in March 1909. The supplier seems to have been chosen purely on price that at £1670 was £250 cheaper than Hawthorne, Leslie’s price for the smaller Cornish engine. The engine seems to have immediately impressed as another larger example was ordered in August 1909 and arrived in November painted in the same way. These engines seem to have been specifically designed for the BPGVs contracts but this second engine seems to have become the prototype for a standard Hudswell Clarke range. These were supplied to a wide range of docks and collieries, particularly the PLA, and with variation continued till the end of steam production.

Meanwhile the BPGV had decided on a further engine similar to Pioneer but with a longer wheelbase. This became No 10 and was described as painted black, as would be all further engines although by Grouping all engines, except 8 & 9, were listed as painted green. At last the railway seems to have made up its mind on a standard loco to meet its needs and 1912 took delivery of No 11, the first of 6 standard engines. It was very similar to No 9 but with a markedly longer wheelbase, possibly for extra stability but perhaps also to accommodate a larger firebox suitable for burning the slow burning local anthracite.

However even the delivery of these standard engines was not straightforward for the third of the engines (HC works No 1164) ordered in March 1915 was commandeered by the government for service with the Ministry of Munitions at Shoeburyness. It finally arrived at the BPGV after purchase from the Governments Disposal Board in 1920 becoming No 15. The railway was promised a replacement in 3 to 5 months but wartime delays meant that it did not arrive till November 1916 and works no 1222 became BPGV No 13. Nor did their next order seem to go well. Although there is no reference in Board minutes Hudswell Clarke records say that works Number 1288 (a BPGV type engine) was ordered by the railway but again commandeered by the Government becoming IWD No 45 at Sandwich .It never reached the railway who had to wait till 1919 for their next and final new engine.

All in all these Hudswell Clarke’s were very successful engines lasting, with one exception, well into British Railways days. They also seem to have formed the foundation to a very successful range of standard industrial engines. A worthy tribute to the railways' reconstruction by Stephens and Morgan

** Intended to be No 5 to replace an earlier engine (No5 Cwmmawr that was not in the event withdrawn) and may have carried that number for a short while.

*** Commandeered by the Ministry of Munitions on 16 February 1916 and sold to the BPGV by the Government Disposals Board in February or May 1920.

Contemporary Articles in the Railway Magazine and The Locomotive.