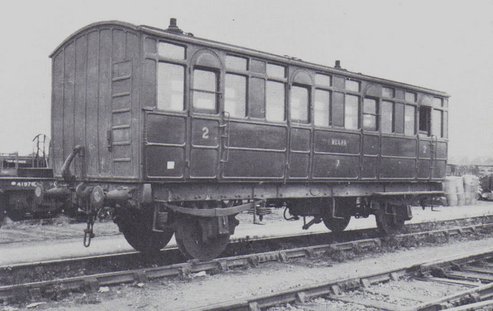 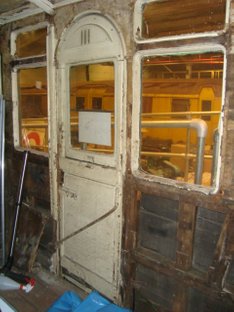 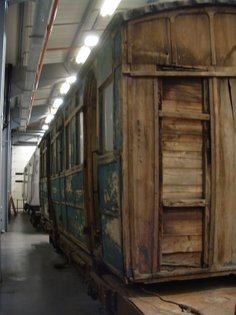 Weston, Clevedon and Portishead Carriage No 7

Carriage No 7 is the last survivor of all the Carriages acquired by Colonel Stephens for his railways and in a few years she may be running again. Her history and survival is something of a miracle and of great interest.

Our Carriage started life as a Metropolitan Railway 'Jubilee' all-1st four-wheeler built by Cravens in 1892 for the then new extensions to Rickmansworth and Aylesbury. Quite why at this late date the MET were still building such carriages for such relatively long runs is a bit of a mystery but the railway, having bought nothing but rather old fashioned rigid 8-wheelers since the 1860s bought the first batch of Jubilees in 1887 (Queen Victoria's Jubilee year - hence the name) for the Circle line, and later batches in 1889 and 1892. Despite a short wheelbase, lengthened somewhat in later batches, the carriage was to prove well-built and, as it turned out, very serviceable. After a few years the MET discovered its mistake and built some bogie carriages (now known as the Ashburys) and after a few more years, pushed by the American influence of its old rival the District, it introduced underground travellers to the joys of electricity.

Rapidly left with only its long distance steam services after 1905 the MET soon decided to dispose of much of its Jubilee stock. It found a ready market in light railways for this relatively new stock and most went for further use all over the country. The MET Stores Committee minutes for 16th July 1907 report the sale of seven carriages to the Weston, Clevedon and Portishead. The numbers of the carriages were given as 337,339,347,322,353, 354 and 355. No 322 was an 1889 built example and 339, 347 and 355 were from later batches, all being five-doored 3rd brakes. The remaining three, 337,353 and 354, were 1892 built 1st class four-door carriages.

On the WC&P it seems that these carriages were immediately formed into close coupled sets. They had always been equipped with suitably short buffers and they were, according to a contemporary press report, formed in at least one set of 3. This would imply 2 sets plus a floater or possibly 1 x 3 and 1 x 4. An internal passageway was apparently cut through the compartments on one side and most doors, except those each end, sealed. The remaining doors were equipped with sloping step boards with an elongated grab rail to help people climb from the railway's many ground level platforms. There was also a corresponding rail inside the lower part of the opening door to further ease boarding. To enable fare collection, crude communicating doors that could only be opened by staff with a carriage key were cut into the inner ends of the carriages in the set .This measure, seemingly so typical of Stephens' methods, was in fact carried out quickly, and was alluded to in the local press in September 1907 some four years before Stephens took over. It was certainly carried out before June 1909, when clear photos were taken showing the doors. At some stage, probably before WW1, the carriages were reformed into 3 x 2 sets with a floater. This was our carriage, No 7, at first numbered 14 which appears to have remained the odd one out which to facilitate interaction with the other sets suffered the indignity of crude doors at both ends to different designs; this difference may have been the result of the re-organisation of the sets.

At an uncertain date, perhaps even in Austen's time, the interior of No 7 was remodelled. 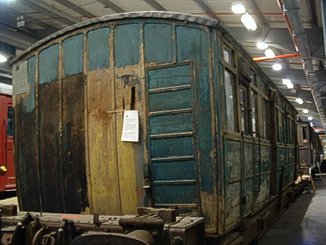 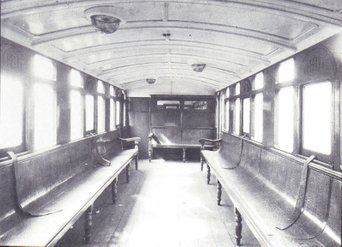 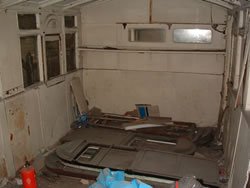 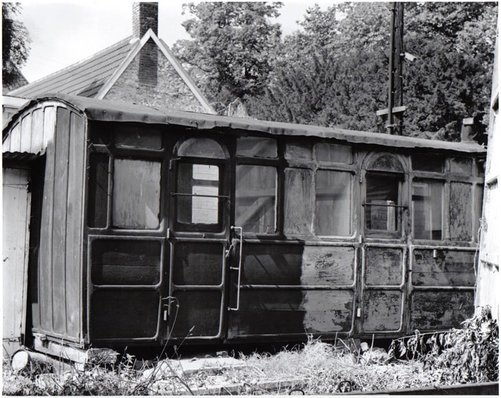 In 1940 the GWR then took all the carriages, minus their passenger steps, to Swindon, where they were photographed, and put up for scrapping or sale. No 7 with two others ended up in nearby Shrivenham. Nearby Barrington Hall had turned it into a training camp for newly commissioned army officers. These men needed to buy new uniforms. These were supplied by military tailors who used the carriages as showrooms and workshops. It was a boom time for military ,and our carriage however ended up in Knapp’s farmyard where it was used by Walters of Oxford, a major military tailor for the final fitting. Later the carriage became a Social Club for the American Air Force. It then became a home for several families at least one family still live in the village. It had been converted into a mobile home and had all the original windows. It had their three piece suite, a cooker, a little combustion stove. It had a lean-to attached to it which had running water. The toilet was a bucket which had to be taken to Longcot Road to empty into a hole had to be dug daily. It was then used as a cobbler’s and its final metamorphosis was as an Antique Shop in the ‘60s.. The address was The Railway Carriage, Hornes Corner, Shrivenham.

Anyway, they had forgotten by all but locals for nearly twenty five years and more. In 1974, at a time of low ebb for the London Transport Museum collection after they had lost Clapham and lived in exile at Syon Park, there came an offer. A Mr Gould of Faringdon, clearly an enthusiast, asked 'Would they exchange an ex-Metropolitan Railway carriage body [in a property adjacent to the A420 at the East End of Shrivenham] for a platform seat for the lady on whose land it was?' A survey was undertaken and the swap was arranged at a nominal cost of £39.50 for a seat from Amersham Station and the carriage body was moved on 29th August 1974. There was then some inconclusive debate about how the body might be displayed. It was thought it would be best to cut it down to one or two compartments for restoration and part display. Fortunately this work was not undertaken, the body languished at Ruislip and subsequently Acton. It is no disrespect to the authorities there that they did not appreciate its significance as a light railway artefact.

The realisation that it was such a relic came about through one of the author's researches.

I was curious about parts of a door from an ex WC&P Jubilee carriage that resided in the Colonel Stephens Railway Museum .The pieces had come in 1992 from Mr D A Wright of Faringdon, Bucks, who had rescued them when a carriage body had been broken up at Shrivenham around 1980. They had 'come from a 1st class compartment in a composite carriage'. On the back of the piece from the top ventilator there was the number 337 plus a V (probably the individual door number). Now an examination of carriage No 7, courtesy of the LT museum, showed that most of the accessible doors also bore the MET number 337 And Mr Gould back in the 1970s had reported all three numbers in the Acton body and the derelict one nearby. However he positively identified it as MET No 353, with a badly decayed body at nearby Watchfield, carrying 337 on 4 door ventilators and 354 (yet another 1st) on one. Well it certainly was WC&P 7, but what was its MET number? 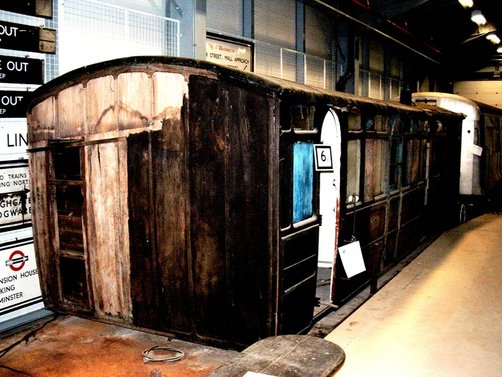 No 7 was now a largely superfluous 1st class carriage and was converted to a more useful summer overflow carriage.   Benches of bent wood were used to line both sides of the carriage facing inwards with two benches at each end. It is probable that these seats were from one of the 'American' carriages that had been experimentally converted to cross seats but they may have been made locally as copies of the 'American ' seats. Although the staff end doors were left clear of these 'new' benches they may well then have then been sealed off from the inside at that time or later, it is difficult to be certain, but they remained in the bodywork.

The Jubilee carriages lasted as sets with the spare No 7 until the closing of the railway in 1940.  a attempt to use No7 as a railmotor trailer in 1921 was called off after one unsuccessful trail trip to Weston ;it was clearly too heavy for the Drewry railmotor to pull or stop.

At that time (2004) physical inspection revealed much of interest although it could not be as thorough as wished because it was hampered by later additions of potentially hazardous materials. The interior had been stripped but the exterior walls were sound, and much interior detail on them, including three mirrors, survives. The rather crudely fashioned exterior iron grab handles fitted on the WC&P were all there, as was one of the interior walls. But most fascinating of all were the end doors. Measuring about 5ft high by 18" wide and clearly not meant for use by someone of modern build they were crudely fashioned. One was built from tongued and grooved board with, as a concession to the weather, simple wooden beads over the board joins. The other door was even lighter with a softwood frame exposed to the elements. A simple carriage lock was fitted to both to stop use by the general public. The door openings were simply cut and faced both sides with strap iron. These doors date from the carriage's earliest WC&P days as evidenced by a photo dated June 1909. It is amazing that they survived the intervening years.

The body was partly covered in badly deteriorated garden shed blue/green paint and, on one part, creosote that had probably been used in its time at Shrivenham. However the body had substantial traces of faded red on one end and fainter traces at the other. Examination showed that it is almost certain that the red was confined to the ends only and the body side livery was always varnished wood. The screwed on cast number 7 had disappeared since 1974 but its outline was still very clear.

So this carriage is definitely WC&P No 7, although at first examination I concluded in all probability MET No 337 despite the Colonel Stephens Museum having a few pieces. However, LT Museum following their recent stripping of the carriage has concluded from evidence on the previously inaccessible carriage doors and, I understand, a marked door pillar that Mr Gould was right in concluding it was MET No 353. Even then careful stripping of the paint from one of these revealed WC&P No 12 painted over 353; clearly the WC&P was partial to swapping doors about.

After our investigations we very much hope that the knowledge that it had a longer light railway than MET history will ensure that the carriage was kept complete in its unique state. However it is in the good care of LT Museum and who can blame them if they want to restore it as a running example of their last remaining MET 4-wheeled carriage. I for one look forward to seeing it run and perhaps even riding in it.