Like many goods vehicles the wagons of this tramway worked in such utter obscurity that it has always proved difficult to pin down the precise origins and disposal of the three generations of wagon thought to have worked there.

According to a posed photo at the time of the opening of the tramway, the first wagons were two very primitive examples of the wagon builders’ art. Like the first coach they had been thought of as Bagnall products but Laurie Baker, the expert on all things Bagnall, is of the opinion that they could not be. It seems likely that they were probably locally built by Rother Ironworks at Rye. The tramway, when first opened was designed to transport Golfers to the newly built golf links but there was always half an eye on fish traffic from boats at the harbour and the wagons were probably purchased for this. However, whether these original wagons worked very much in traffic, if at all, is difficult to judge. They had certainly been replaced in normal service after the first year or so. This may not be un-associated with the decision to carry sand from the beach for sale at Rye for they were unlikely to have been robust enough to stand such heavy loads. By about 1897 more wagons had come into use. Until 1909, when the number dropped to two, three wagons had been recorded in Railway yearbook returns. Again the origin and nature of these wagons is uncertain. Certainly two wagons were conventional, miniature British railway wagons fitted with the canvas axleboxes covers customary at this time for wagons that carried abrasive substances.

These originally had four side planks with lift out end doors and outside bearings to the wheelsets. From a very early date they were used at peak times as open passenger carriages by the simple addition of planks laid across the sides. The third wagon is a mystery. Laurie Cooksey in his excellent Centenary History thought, on the basis of a part wagon shown in a photograph taken in July 1914, that there was a two-plank wagon otherwise identical with the four plankers. However, it is clear from photographic evidence that the four-plankers were re-boarded with two planks at an early stage and that Laurie was misled. It is probable that the third wagon was one of the pioneers that survived only till 1908 as a PW vehicle. 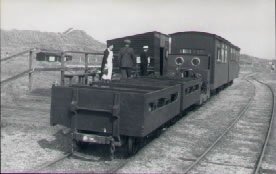 Harty ferry wagon in passenger use

The two earlier wagons continued to be listed in stock returns until 1940 but there is no record of them existing after 1931 when Henry Casserley photographed them in semi- derelict condition. They were certainly not needed. The Navy inventory does not appear to record them so they probably disintegrated by 1943. From photographic evidence the two disused unconverted wagons were Harty Ferry wagons. However the Navy did put one to use along with one of those converted to an open carriage (the other had been dumped upside down without wheels in the new shed)

Eric Tonks recorded the remaining four ex-munition wagons in 1946. At least one was serviceable at the time of the railways dismantling and all were sold with the other rolling stock (except the steam locomotive Camber) to George W Bungey Ltd a machinery dealer of Hayes, Middlesex in October 1946. He may have scrapped them on site or sold them locally but if he left them behind they would have been destroyed, for the station site was soon cleared by another local contractor and no trace of the tramway was left in Rye.

Ever on the lookout for a bargain, Stephens looked around the government disposals programme at the end of the First World War. Perhaps he foresaw a substantial increase in sand traffic for he not only bought four wagons but also a large second hand building. The staff were always clear that these came from an Ammunition factory somewhere in the Medway area. This is confirmed from observations made by Eric Tonks. Tonks in his usual meticulous way recorded ‘14w wagon, red, with open carriers. Two lettered ‘HARTY FACTORY’; one lettered M M CC20/20’.

In his 1943 notes Stuart Pierce Higgins confirmed these markings.

This is clear confirmation that these vehicles, one of which still carried its lot number from the auction, came from the Ministry of Munitions Harty Ferry Powder Factory near Faversham. That factory was served by the short lived metre gauged Davington Light Railway

The date of acquisition of the vehicles has also been questioned. The railway yearbook returns show six wagons from 1918 onwards but this is incorrect The Tramways accounts for 1921 explicitly note the purchase of wagons and a new shed etc for the grand sum of £126/15/6

The new shed, which was erected in the winter of 1921/22, always seems to have been searching for a use and only two of the wagons seem to have seen regular active service. These two were quickly rebuilt to open carriages. When questioned the two employees of the Tram differed as to whether they ever had their seats removed for use as wagons. Given the nature and careful work done on the conversions by a local carpenter it seems unlikely that they were ever used other than as carriages. One of the remaining two wagons may also have been used but it is unlikely as the existing wagons were all that was needed when sand traffic was lost to lorries during the 1920s. One of the Harty Ferry bodies carried its lot number into wartime and was probably never used. The Navy inventory of early 1943 then records

2 Open wooden, 4 wheel trucks, generally serviceable but neglected order due to being disused for some time.