Although it was evident that the railmotors ordered from Ford were not popular with passengers they had proved economical and reasonably reliable. Colonel Stephens was looking to further railmotors and is known to have bid for the Derwent Valley Light Railway Ford motors put up for sale in June 1926. He then advertised for second-hand buses, presumably with a view to conversion, in Motor Transport Magazine of 3rd January 192. Never having been particularly fond of the Ford make (production of which anyway ceased in May 1927), and probably receiving no response to his second-hand enquiries, Stephens sought out a new source for vehicles for the Selsey Tramway and the Kent & East Sussex Railway.

In December 1927 Stephens ordered a new pair, this time from Shefflex Motors Ltd of Tinsley, Sheffield. This company was an offshoot of Sheffield Simplex established builders of luxury passenger cars who had during World War I when Commer Cars were working at full capacity to meet demands for their military trucks, sub-contracted to manufacture lightweight 30/40 cwt Commers. When Commer returned to normal peacetime production, the contract with the Sheffield Simplex Car Co was ended, surplus stock was sold to R A Johnstone, an operator and motor dealer. Johnstone set up a production plant to build more and such lorries then built at Sheffield were marketed as Shefflex, a company set up in 1918. It was a low volume business manufacturing solidly made cheap and economical lorries sold locally. The lorry chassis chosen was therefore of a long, perhaps outdated, lineage thought production lasted till at least 1931.

Although the initial order was credited to the Shropshire & Montgomeryshire Railway, it is doubtful if the unit was ever intended for Shropshire. Traffic there had already dropped below levels that would have made new provision necessary, most likely it was a misreading of a Stephens' standard letterhead. The resultant 2-car unit was sent direct to the Selsey Tramway by February 1928, and was paid for by Stephens out of his own pocket, remaining his personal property. 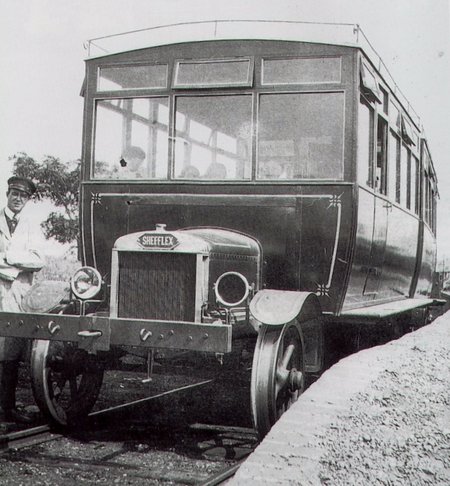 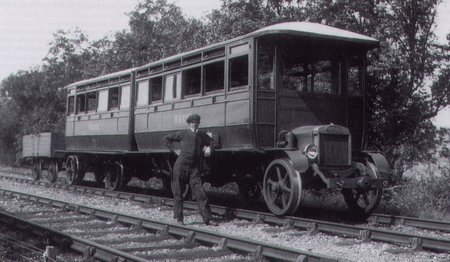 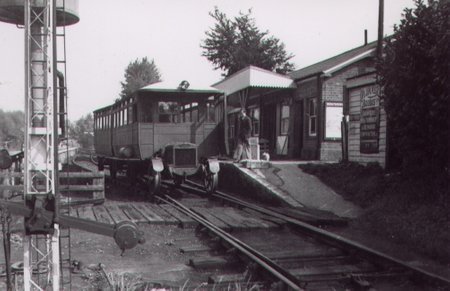 On 14th December 1927 Shefflex had allotted chassis numbers 2058 and 2059 to the unit and added 6-spoke steel flanged wheels by Wagon Repairs Ltd. Though still rather primitive vehicles by latter standards, they were mechanically more sophisticated than the Fords. The engine had four cylinders of 3 5/16 inch (100mm) bore by 4 3/5 inch (120mm) stroke and cooling was effected by a three-piece cast aluminium and tube radiator. The patent gearbox included three forward gears and one reverse, the changes being effected by a combination of sliding gears and dog clutches. Behind the gearbox was a fabric to metal transmission brake, and there were fabric faced expanding brakes acting in open drums bolted to the rear wheel spokes. Riding was marginally better than that on the Fords with a firmer and more comfortable ride, being carried on semi-elliptical springs.

The bodies were built by W J Flear Ltd, of Durton Road, Sheffield and cost £143 each, with a further £15 for painting, varnishing and cushions. Whilst similar in general appearance to the Fords, each car was slightly longer at 16ft 8in over the frame, with a 11ft wheelbase, and had an increased seating capacity of 23. A rear facing bench seat was beside the driver and the remaining 5 rows of rexine cushioned seats were of the throw-over type. The body had the side doors with drop lights set back behind the driver. The main body had top-lights but only some opened; the centre one above the 3 piece windscreen, the front side ones ahead of the front doors and the middle of the rear three on each side, all hinged by their top edge to open outwards. The set was heated by the exhaust gases ducted through hot air pipes.

The single luggage rail on the roof was again installed, but in service they were rarely, if ever, used. The original livery is believed to have been dark brown with intricate gold (or yellow) lining out to the front, rear and side lower panels and a white roof. A much sturdier, though shorter, buffer bar than those on the Fords was fitted to each car in front of and in line with the bottom of the radiator, which featured a drop-pin coupler with coupling hooks on either side.

Like their Ford counterpart on the Tramway, alterations to the Shefflex set in service were minimal. However, sometimes a hybrid railmotor might be formed when a Ford would be coupled back-to-back with a Shefflex. The only external changes apparent during the sets life were that electronic gongs were fitted in August 1932 to give further nominal warnings at the numerous level crossings.

With only seven years' service to their credit, one might have expected the Shefflex set to have been transferred to the Kent & East Sussex Railway. However, operational policy there had changed following Stephens' death in 1931, with greater use of mixed trains. Therefore, soon after the closure of the Tramway in 1935, the two chassis, with their bodies removed for a fate unknown, and the 3 plank baggage trailer were towed to Chichester to be scrapped.

The Kent & East Sussex Railway Directors, asked Colonel Stephens on 5th December, 1928 to ascertain the cost of a new railmotor. The Board meeting in October, 1929 recorded that Stephens had personally purchased a new set for £750, and it therefor seems probable that the second Shefflex set entered service sometime earlier in 1929. Stephens was recompensed with £938 of the Company’s 4% debentures, which by that time were virtually worthless. The Shefflex Company had no gaps in its chassis number records to account for the K&ESR’s railmotor pair and none of the purchasers recorded by them have any apparent connection with Stephens.

Although only a short period since the Selsey set had been supplied the body was very different, although built by the same company, J. W. Flear, and for the same price. The Locomotive magazine in its 14th June, 1930 edition explained that new Ministry of Transport regulations allowed a larger body to be used on the same chassis. Although on the face of it such regulations did not affect rail vehicles, it would have altered the coachbuilder's general design, and the new body probably reflected these changed practices. The new bodies were completely different to anything which had gone before with and had a white-painted domed roof without luggage rails. The original bonnet was halved and the dash board forward moved 18”, with the driver’s controls being moved forward by a similar amount. There were four windows (each with toplights) on the front panel, two narrow ones on either side of the main pair of square ones. The driver’s boasted a top-hinged opening top section with a hand operated windscreen wiper. Front-hinged, outward opening entrance doors, with full-drop windows and railway-style leather straps, were provided on either side of the driver and of the five windows to each side, the first two and the fourth were of the full-drop type, also with leather straps, the others being fixed. Above each of the windows, the top-lights were horizontally centrally hinged for maximum ventilation. The sides, generously panelled with beading, curved inwards to the wide full-length wooden footboards, but the two pairs of brackets for holding destination boards on the waist panel each side, appear never to have been used.

The design of the lower sides lends some credence to the rumour that these bodies were originally an order for Stafford road buses, for the curved outline of the rear mudguards can be seen. The rear lower panels also curved inwards like the sides, but other than that, the arrangement was similar to the Fords, with a fixed side window on either side of a sliding door. Narrow horizontal wooden footboards led from the front bulkhead over the front wheels, with minimal short curved metal mudguards attached to them. From the front of the chassis, two quite substantial metal bars curved down to a sturdy wooden buffing bar, slightly above axle level and just wider than the bonnet. A round slotted drop-pin coupling was fitted centrally and there was a coupling hook on either side.

The driving position was slightly to the right of centre, as on the Fords, but the driver sat higher, giving an improved view ahead. The steering column was not retained on the Shefflex; a handbrake to the rear wheels was on the left and a vertical hand-wound brake to the front wheels was on the right. A Klaxon horn was fitted, with the horn protruding through the car body, leaving the hand-operated push down rod inside the car. This could be operated by hand or foot, according to what was free at the time.

Seating is likely to have been for 22 passengers in each car on reversible-back seats with cushions of a Rexine type of oilcloth, filled with horsehair.

Probably carrying a brown livery to begin with, this unit was numbered 3 centrally on the lower side panels, with “K & E S R” in large capital letters on the panel above, probably in gold or yellow, with red shading. At some time after 1932, it was re-numbered “2” with the Company’s initials more widely spaced out, this time probably in plain yellow.

The Shefflexes were slightly more powerful than the Fords, but this advantage was largely cancelled out on the K&ESR by the larger, heavier body. The Locomotive claimed that “a speed of 30 to 35 mph can be obtained ", well above the statutory speed limit but probably necessary to keep time.

Poor maintenance and a reportedly indifferent gearbox seem to have given problems. At the time inlet and exhaust valves had to be ground in by hand and new piston rings fitted every few months or so, and big end bearings had to be continually re-metalled and hand-scraped to fit. This work, and the need to fill in driving turns, led to neglect by the locomotive fitter at Rolvenden and a period of poor reliability. Salvation came in 1935 when an ex-Tank Corps, driver made redundant when the Selsey Tramway closed arrived. He immediately rebuilt the set which was back in full service within three months, thereafter working almost daily until 8th March, 1938. It then joined the Ford railmotor in the sidings at Rolvenden and by September,1939, the unit was a reduced to chassis only. These were sold for scrap on the 8th August, 1940.

For use with the Shefflex sets open baggage trucks were used, rated at a maximum load of 3 tons 10 cwt. for carrying light goods. The Selsey example was similar to the one that had been supplied to the Shropshire & Montgomeryshire Railway along with their 3-car Ford railmotor in the autumn of 1923 and used with both the Ford and Shefflex sets as required. It was of 3-plank construction, with external strapping either side of the centrally-placed bottom-hinged opening doors, and on either side of the slotted square drop pin couplings. The K&ESR truck, which was entirely different in all its constructional details from with the S&MR one, was built by Messrs Cranes of Dereham with pressed-steel disc wheels running on inside bearings, but had inside framing with five planks. This truck first appeared in an official photo of the Selsey Ford set when it first arrived there in 1925, after that units trials on the KESR, but disappeared soon after, only to appear later with the Sheffex set on the K&ESR .

On the K&ESR and sometimes on the Selsey these trucks were towed by the Shefflex units which then involved the inconvenience of it having to be run round at each terminus. Although the K&ESR also adapted its Ford units to tow their truck it soon fell out of regular use and seems to have become a permanent way trolley, lasting in that role till at least nationalisation.