The lightweight Railcars (contemporarily described as Railmotors) built on bus chassis were a characteristic feature of the Stephens Railway of the Twenties and early Thirties. As a unique feature of the British railway scene these were a pioneering effort but they have come to be seen by many of a later generation as oddities. Certainly in their later years this was probably a correct view. Amongst these there was however an even more noteworthy and somewhat mysterious machine - a lorry railcar- about which little is known and which might have been forgotten but for a few photographs. 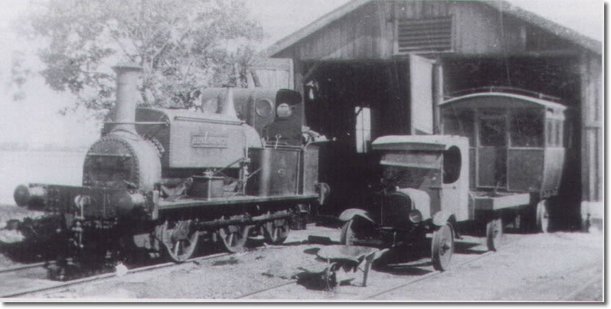 This rail lorry's origin is cloaked in obscurity. It is very clearly a Model T Ford, the lorry version of which was produced in the UK as a lightweight van from 1915 and as a stretched 1 ton variant from 1918. This later seems to be the basis of Stephens machine. By the 1920's these road vehicles were old fashioned and inefficient but they were reliable and cheap and as such very likely to appeal to Stephens.

The Colonel was very actively engaged in building the North Devon & Cornwall Junction Light Railway over the period 1922-25. During this period Humphrey Brandram-Jones was a young civil engineer employed on the construction of the railway from late 1923 to early 1925 when the railway was nearing completion. He recorded

'Colonel Stephens visited the line several times whilst I was there. He usually arrived by road at our Hatherleigh offices in a chauffeur-driven lorry, which possessed a spare set of flanged wheels which could be readily attached to the vehicle. By this means, he managed to visit all parts of the line where steel had been laid, in a very short time. Much of the Railway was quite remote from even the most primitive lanes and the alternative was to walk or ride the route, which was continuously submerged in a sea of mud.'

Concurrently Stephens was experimenting at Tenterden on the KES . His pioneering railcar was a pre-war Wolseley -Siddeley car chassis that was adapted around 1921 to a rail lorry and then a bus. Being single ended it was almost useless on a railway without a turntable and need a second unit to operate effectively. Meanwhile pairs of railcars from Ford were coming into operation and Tenterden had two. 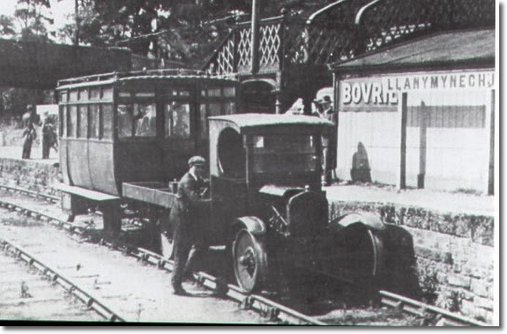 The Selsey Tram (West Sussex Railway) had received 1 pair in 1923 but these were insufficient for the services. It seems probable that to meet this need Stephens cast around and worked out that his convertible lorry could be paired with the Wolseley-Siddeley to provide a second train. This odd pairing seems to have appeared on the Selsey in about1925, when '4 Railmotors' were showed in that years official return.

The arrival on the Selsey in late 1927 of a second set of railcars- a Shefflex set, which was the Colonels personal property- made the lorry and its partner redundant. Around this time they were transferred to the Shropshire and Montgomeryshire Railway. Many think that they did not work together there but railcar mileages recorded over the period 1927-1929 were higher than would have been possible with the one resident set. The lorry however definitely worked and was seen occasionally paired with one of the resident Fords. It was however later consigned, paired with the Wolseley -Siddeley, to the Kinnerley dump from whence it disappeared sometime after 1932.

Stephens was a great publicist when it suited him but he did not advertise his many low cost palliatives. The Rail Lorry therefore served in humble obscurity before the rise in the 1930s of the investigative enthusiasts to pin its origin and use down and it faded into the undergrowth of history.