Thoughts on the WC&P carriages

Both of the standard histories of this railway, excellent as they are in most respects, are somewhat thin in their coverage of the coaching stock.

The Weston Clevedon and Portishead Light railway was conceived as a tramway style operation The first carriages, Nos. 1-6, were built to the American, or Pullman, style that was popular at the period for such operations. Reputedly left on their builder’s (The Lancaster Railway Carriage and Wagon Company) hands after being ordered by the ‘Argentine Republic Railway‘ they were unlikely to have ever been intended for mainline operation even in south America as their construction was very basic. They seem to have been delivered sometime in 1897. The original seating arrangement of transverse 1st class and longitudinal plywood (contemporary American practice) seating was subject to critical comment and reversible tramway type seating was substituted in at least one carriage by 1900. 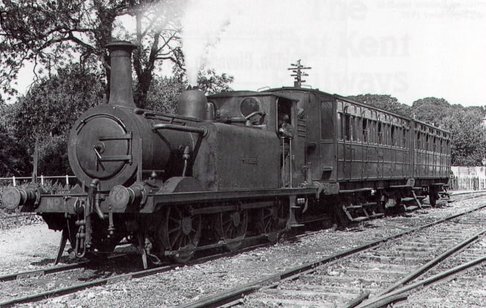 Three carriages were listed for many years as having greater seating capacity which might indicate changed seating arrangements and Humphrey Household implies that the arrangement was in more than one. However the three surviving carriages which were refurbished in 1937 had their original longitudinal seats at the end. After the introduction into service of the first petrol railcar in 1922, and the arrival of the LSWR set, these six carriages were little used and Nos. 3,5 & 6 were sold in 1935. The refurbishment of the other three for use on high days and holidays turned out to be of limited value, for the end came for all carriages in 1940.

The next reported carriage is a real mystery. Supposedly arriving in 1901/2 from the great Central Railway, Christopher Redwood quotes as a source for its existence the contemporary press reports of total numbers of carriages and an ambiguous statement about an open carriage. Colin Maggs says benches were placed on it and Michael Windeatt's notes say that it was fitted with cross tramcar-type seats and was used for 'open observation' car but was very unpopular. This might not suggest a carriage but a more a flat wagon.

Nor was it reported as a carriage in the totals of carriages in the earliest annual reports held in the Colonel Stephens Railway Archive for 1911. The only apparent physical evidence was the abandoned underframe in Wick St Lawrence siding. In this form it had  a wagon handbrake and chains for securing heavy timber or rails. Careful examination of photographs show however that it seems to have been a carriage style underframe with construction springs and wheels of a coach of considerable antiquity. Possibly it had a coach body or perhaps private carriage carrying vehicle for use in passenger service . Probably modified before coming to the WC&P it may there have been allotted No 7 in the carriage series although its use in such capacity was clearly short.

For the Portishead extension in 1907 the railway made an excellent bargain by buying some fairly new Metropolitan Railway 4 wheelers. These had originated in the Metropolitan’s new, and in truth fairly unsatisfactory, attempt to provide comfort on the longer distance services they were putting on in 1887. In honour of the year of their introduction they were called Jubilee carriages. In researching the railway’s records in the London Metropolitan Archive I found in the Metropolitan Railway Stores Committee minutes for 16th July 1907 a report of the sale. Helpfully the numbers of the carriages were given as 337, 339, 347, 322, 353, 354 and 355. Jim Snowdon’s book tells us that 322 was an 1889 built, short wheelbase, 4 doored 2nd class brake and that 339, 347 and 355 were similar but 1892 built with a longer wheelbase. Something was wrong here for the WC&P carriages, although the wheelbases corresponded, were all five doored 3rd brakes. Jim got his information from other researchers and official returns but I think the numbers of the 2nd and 3rd class brakes got transposed somewhere. An even bigger surprise to me though was that the remaining three, 337, 353 and 354, were 1892 built 1st class four doored carriages. I had always read the histories as there being only one ex 1st class carriage but careful examination of photographs revealed that there were indeed three four doored firsts. 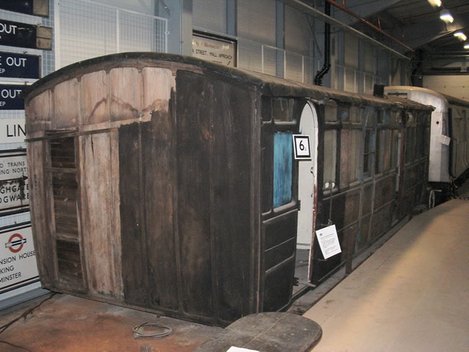 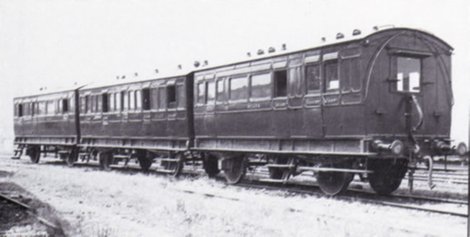 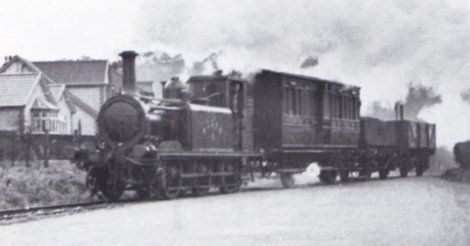 The Met. carriages were formed up into close-coupled pairs (perhaps originally two three-carriage sets) as Nos. 8 (ex No. 322, 3rd) & 13 (ex 3rd); 9 (ex?) & 10 (ex?); and 11 (ex 3rd) & 12 (ex 1st[353?]). All had a side access corridor cut through compartment partitions inside and according to Household, had doors and fallplates between carriages. The seventh carriage was a single floater originally numbered 14, later No7, and was extensively rebuilt, by 1922 at the latest, internally as an open saloon possibly using the longitudinal seats left over from the refurbishment of the American carriage. This work may have been undertaken to lighten it as a railcar trailer, although this use was short lived, for by 1923 a purpose built lightweight trailer was acquired. This body still survives in the London Transport Museum reserve collection at Acton and a recent examination has revealed its Metropolitan identity. It is clearly marked with its number, 337, on the inside of its door ventilators. Strangely one of these ventilators seems by co-incidence to have made its way via another, subsequently scrapped, carriage body to the Colonel Stephens Museum. (Since this was written the body was restored to running condition.

In restoration the identity was established, by consensus as No 353 rather than 337 even though the W&CP number 12 was found overlaid on the MET number 353)

Examination of this body also shows a most prominent feature - the interconnecting doors for ticket issue and collection by staff. These doors appear to have been installed by the WC&P when the carriages arrived in 1907 and are remarkable both for their crude construction and for their expectation of short thin and athletic staff, as the doors are only 5ft high and 1½ ft wide. .No 7 has two of these doors which are very prominent on the ends, and give the carriage a now unique character.

A Great Eastern Railway full brake was obtained in 1916 to becoming new No 14.It was a GER diagram 508 vehicle, body length 27ft 0ins, one of 56 built from 1876 to 1883 for main line service. GER Stores Committee minutes for 5th  October 1916 record brake van No 181 was sold to the  WC& P for  £47 13s'.The Van was built at Stratford Works in December 1880 and withdrawn in December 1915, apparently the last but two of the class to be taken out of service. It was usefully employed until derailed at Worle on13th July 1927 when its frame twisted and it was sidelined and never used again and scrapped on site in 1940.

The next acquisitions were numbers 15 to 17. Dismissed simply as purchased in the 1920s from the SR the three ex-LSWR carriages have a much more interesting history than this statement reveals. Two were saloons built by Metropolitan Carriage and Wagon for the LSWR in 1869 during Beattie’s time, and largely used on the Waterloo – Windsor line being known as Windsor saloons. Thoroughly rebuilt in about 1888 but remaining saloons, they are recorded by Weddell as withdrawn or ciphered (replaced and awaiting disposal) in the period around 1905. He records specifically that Nos. 457 and 458 were the two WC&P saloons but it is unlikely bordering on the improbable that they remained on the LSWR till the 1920s. One was a brake saloon numbered 15 on the WC&P and the other became 17. The third carriage became carriage No 16 and seems to be a 30’, 4 wheeled, five compartment, ex 3rd, from block sets most of which were built 1879-85 and all of which were withdrawn or placed on the Cipher list by 1905. These numbers may not have been initially carried, for on the evidence of numbers of seats in the annual reports the compartment carriage was probably acquired first, in 1925, and the two saloons in 1926.

The question remains, where had these carriages been between 1905 and the 1920s?

Well I think the answer lies with the Plymouth Devonport & South Western Junction Railway. Although research is incomplete for this railway, Stephens is known to have bought an unspecified number of carriages from the LSWR for this railway’s Callington branch in November 1905.

Photographic evidence exists for one of the Beattie saloons at least being there on opening day, 2nd march 1908, and the other carriages were of block set LSWR four wheelers. There are often said to have been North London carriages on the railway but I have seen no photographic evidence of their presence and all of the stock seems to have been ex LSWR. Official returns show 16 carriages in 1910, 9 in 1911 and 8 in 1913. Six compartment carriages were sold to Stephens, possibly for the SMR, in March 1911 shortly after he severed his PD&SWJR connections, which would account for most and the further two may well have been the old ‘royal’ saloons that Stephens acquired for the KESR and SMR. None of this is entirely certain however for the KESR also received two 4 wheeled carriages in 1910 and two more in 1911. All of these carriages were from the LSWR 1879-85 block sets. The eight other PD&SWJR carriages remained, to be joined by 3 or 4 bogie composite carriages (but no brakes) in 1921. Some at least of this stock would then have been absorbed into the SR in January 1923 and six 4 wheelers received SR Numbers 2463/4,4106/7 and 6370/1( PDSWJR Nos 3,4,19,16,18 and 20 respectively) ;6370/1 are recorded as going to the Isle of Wight in June 1923 and 4106/7 as sold in July 1925. I think that it is probable that 4106/7 ,unless there were others unrecorded, were two of the the carriages that Stephens bought for the WC&P.

Carriage No 16, whose L&SWR identity remains unknown, reached the WC&P by an even more convoluted route. It was one of six 4 wheeled carriages coaches that Stephens had obtained for the PD&SWJR for the S&MLR. Of these, S&MLR No 11, was sold on to the Weston Clevedon and Portishead in 1925 to re-join its former companion coaches.

The final addition to the WC&P carriage stock was No. 18 bought from the GWR in 1928 to replace an ex GER full brake carriage acquired in 1916 and damaged in an accident in 1927. This carriage originated from the Taff Vale Railway and was an unusually arranged 26’ four wheeled, two compartment brake 2nd (the WC&P had no third class). Kidner reported its former identity as either 219 or 220, built in 1891, and as Mountfield lists only one other TVR carriage with this odd arrangement this is certainly correct. This carriage is much neglected by historians, probably because its use was largely confined to winter mixed trains when enthusiasts were not about, but was as important as any in the history of the WC& P and served usefully on winter mixed trains to the end in 1940.

All the surviving carriages were packed off by the GWR to Swindon works in August 1940 and all seem to have been sold off as useful bodies for a variety of uses. As mentioned above, one now survives – the only known remaining carriage from any of Stephens standard gauge railways.

The Weston, Clevedon and Portishead Railway, articles by H G W Household in The Locomotive, 1929