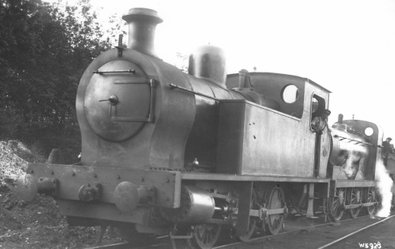 A hefty engine well suited to colliery work arrived from Richborough in October 1919 to replace Hecate and she came to be regarded as the best loco on the line. No 4 was second (works No 3067) of a batch of 10 0-6-0Ts built in 1917 by Kerr Stuart as its “Victory ‘’ class for the Inland Waterways and Docks Department (Royal Engineers) where she was numbered 11. The engine was a well-constructed load shifter weighing a hefty 50 tons. All the class ended up short hauling coal, including 3 in South Wales that came into the GWR’s net in 1923.

The cost of £3050 was too much for the impecunious EKR so although Stephens selected the loco she was actually purchased by the East Kent Colliery and the Golford and Waldershare Colliery jointly, and bore a plate to that effect. This is in Tenterden Museum. At first known by her IW&D number and apparently working on the EKR for free an arrangement was formalised in November 1920 and a hire purchase agreement signed backdated to the 22 April. Monthly payments of £79 12s 7p were due over the ensuing four years but the railway defaulted in 1921. Payments were rescheduled to be completed on 1st August 1927. However events, not least the General Strike and its associated prolonged coal strike and the receivership of both colliery companies, intervened. The engine seems only to have been finally paid for in 1929 when for a terminal payment of 1shilling the engine became EKR property

Due to her weight No 4 was always restricted to the Shepherdswell to Tilmanstone run. She soldiered on, ever steady and reliable. Her steel firebox was replaced with a copper one and her smokebox and chimney rebuilt in South Eastern and Chatham style during an overhaul by the Southern in late 1932 /33, re-entering traffic on 23 June 1933. Despite a prolonged period out of traffic from April 1943 till May 1945 she kept shuttling coal from Tilmanstone and came into BR stock in 1948. Two of her sisters, BR Nos 666 and 667, were still hard at work on BR in South Wales and the other 7 were still hard at work in the Coalfields. However the Southern Region had no time for what they saw as a one-off and scrapped her in 1949 before she could be re-numbered 30948, the first of her class to go (the last went in 1969)

No 5 was a very odd choice for a rural light railway with pretensions to be a major coal haulier but miraculously she is still with us. She was one of the famous Adams Radial tank engines, LSWR No 0488, a 4-4-2T built for suburban traffic in 1886 by Neilson and Co. Made redundant like virtually all her sisters in 1916 by the effects of electrification she was the second of the class to be withdrawn. She was bought by the Government in September 1917 and then worked at Ridham dock near Sittingbourne either as a rather unsuitable dock shunter or more likely on staff trains. Reported by many to have arrived on the EKR in April 1919 at a cost of £800 both presumptions seem wrong. Dick Bradley has pointed out that she was still advertised for sale in August 1920 and the EKR Loco Register records that she was purchased from the Ministry of Munitions Disposal and Liquidation Commission in March 1923 and delivered at Shepherdswell on April 13 1923. Charles Klapper, who knew Stephens well, reported the price as £360. The author always considered this low price as probably right, as the Commission was abolished that month, there was a very limited market for the engine and Stephens knew the system. Very recently accounts have been discovered in the Museum Archive that show that the price paid was actually £375.

Seemingly little suited to the East Kent’s needs the new addition was a pure passenger engine whose only likely role might have been on the abortive Canterbury extension finally authorised in 1920. Dick Cash, a long-time EKR employee, reported that she rarely went further up the line than Eythorne as she had a tendency to derail on the sharp curve out of Eastry (an odd fact that in view of her later use on the ferocious curves at Lyme Regis). She was only used when absolutely necessary and then largely on coal trains taking 14 wagons (No 4 took 18) on the Tilmanstone shuttle. In truth her axle load of some 15 tons was far too heavy for the EKR beyond Tilmanstone and she would probably have spread the track whenever she ventured that far. 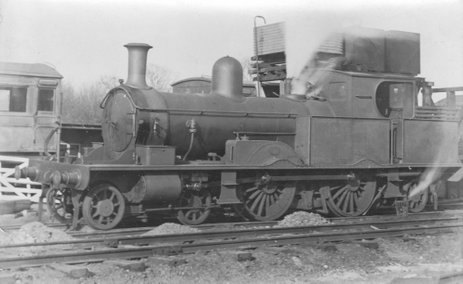 Nevertheless she was repainted and probably overhauled at least twice during her time at Shepherdswell, the last time in 1935 when amongst other bits she seems to have received a replacement chimney provided by the SR for £1 10s. Reputedly worn out by 1939, she was in fact used thereafter, with Walton Park, as a regular substitute for the colliery shuttle engines and seems to have worked about once a month. She was last used on 29 May 1943 but was then somewhat mysteriously kept on throughout the war years until in March 1946 the Southern Railway purchased her for £120. They were desperate for another engine for the Lyme Regis branch where two of her sisters had kept services going for over 20 years. After extensive overhaul she went into service there and, charmed engine that she was, she survived long enough for the Bluebell Railway to save her. Perhaps one day she might run again as a guest on the EKR or the K&ESR.

No 7 was a “Beattie” saddle tank built in 1882 to a Beyer Peacock standard design that was a near relative of the Ilfracombe goods. They were the earliest standard LSWR Shunters and were obsolete by the 1920s. Newly overhauled at Eastleigh ex LSWR No 0127 left for its new railway on 9 January 1926 and after a day or two on the K&ESR en route arrived at Shepherdswell on 15 January. Initially she seems to have been stored and a rough sketch in the archives of her fitted with a shorter chimney suggests some doubt about clearances. This must have been resolved fairly quickly and she was soon at work on mixed and passenger trains, seeming to supplant No 3 .She was reported initially as working coal trains but did so very infrequently through most of her life. During a heavy repair at Shepherdswell in 1936/7 her worn out sloping front smokebox was replaced by a new smokebox with the later chimney from the by then dismantled No 1. 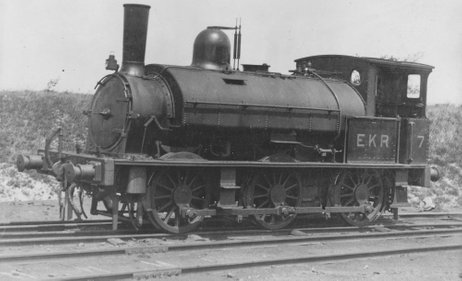 She re-entered service in a smart green livery but was worn out by the middle of the war. Used for 3 months from October 1943 she saw only 2 days further service until there was some sort of locomotive crisis in September 1944. This brought No 7 out of disuse for a final heroic fling. For 12 days she worked the mixed trains but so dire was her state that on her last day, 28 September, she seems to have been relieved in mid shift by hired help. She never worked again. Disappearing from the register at the end of 1945 she was sold to the Southern for £70 and scrapped at Ashford on 23 March 1946.

Going straight into traffic on arrival the hired help was a great rarity, a T class 0-6-0T No 1604. This neat little engine was built for the LCDR at Longhedge in 1891 to an 1879 design and was one of a class of 10 that worked around Victoria and other London yards on empty stock and goods workings. Withdrawn in 1939 she was reinstated when war broke out. Probably officially too heavy for the EKR this engine, unobserved by scarce wartime enthusiasts, stayed on until 13 January 1945.