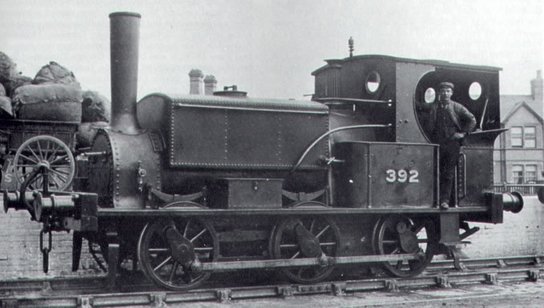 The engine concerned was a standard 'old I' class 0-6-0ST (Works No 50) delivered new to J T Leather of Waterloo Main Colliery near Leeds in June 1862. It was sold in 1872 to Robert T Relf a contractor based at Okehampton for building of the Okehampton – Lydford. Named 'Alfred' it worked on construction of other lines in the area until the London & South Western Railway purchased it in December 1879. At some time it acquired the name 'Lady Portsmouth' and was employed on construction work and other light shunting work, with a short spell on the Bodmin and Wadebridge. For extended periods from 1897 to 1909, it appears to have been on loan to the independent Lee on Solent Light Railway. During this time, but at some time after 1902 when it acquired the duplicate number 0392, it acquired solid disc wheels, a rare feature in any locomotive and its only other known use by Manning Wardle was on Weston, Clevedon and Portishead Railway No 5 supplied to Colonel Stephen's specification in 1919.It probably left the Lee on Solent in 1909 when the LSWR took over its direct operation using railmotors.

Holman Stephens was partial to classical names and used the name 'Hecate' on at least three engines on his railways. He was also fond of contractors locomotives made by Manning Wardle of Leeds that could be picked up cheap to make good light railway locomotives. In the collection of photographs handed down from Stephens office, and now in the care of the Museum, is seemingly a works photograph of a Manning Wardle engine named Hecate. This is something of a mystery as otherwise the locomotive does not seem associated with him and never seems to have run on any of his lines. 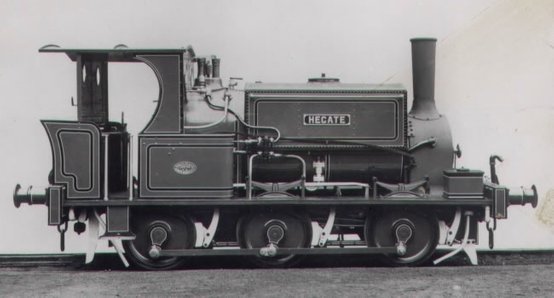 0392 was withdrawn by the LSWR in December 1913. The Bute Works Supply Company Ltd (with whom Stephens made several deals around this time) bought the loco in January 1914 and sold it in May 1914, according to the builder's order book to the Shropshire & Montgomeryshire, though subsequently the order book shows it with the WC&P. The S&MLR attribution is almost certainly a misunderstanding due to Stephens' multiple company letterheads; an oft repeated confusion.

Then the Manning Wardle order book records that in January 1916 it was rebuilt by them not by Hunslet Engine Co as reported by Bradley in his L&SWR book. It was fitted a new mild steel boiler with 160 lb. working pressure and Ramsbottom safety valves and acquired a short stovepipe chimney of a style favoured by Stephens in this period . This process transformed the Hecate's appearance and she became the relatively modern engine appearing in Stephens's photograph. It was at this stage it probably acquired the name 'Hecate' and in was painted royal blue with white and black lining.

Bradley records, incorrectly, that the engine was immediately resold to the War Department in May 1914 for service at Tidworth Army Camp where it was certainly in service until about mid-1928. In October 1928 it was noted derelict in a siding at Tidworth station and in April 1929 it was apparently sold for scrap to George Cohen Sons & Company Ltd. of Neath. It was observed there in December 1933 and advertised for sale at this time but was probably scrapped soon thereafter.

Two questions remain: did it run on the WC&P in either new or rebuilt form and when did it go to the War Department? The timeline now suggests that it ran on the WC&P for a limited period from immediately prior to and during WW1. Did it then go immediately to the WD in early 1916 or return to the WC&P in its new form before going to Tidworth? Bristol builder Avonside Engine supplied spares to the WC&P for locomotive ‘Jumbo’ in February 1917, a scrapped sister engine to our mysterious Hecate when she was on the LSWR, but this is by no means definitive.