This article by Brian Janes was published in Tenterden Terrier Number 87 Spring 2002 but information obtained after press day meant that some important changes needed to be made to the text. What follows is the author’s definitive text.

Click on the images to see the larger pictures

The old KESR is associated with its original diminutive 2-4-0Ts, its Terriers its Ilfracombe Goods and even that white elephant Hecate. However for much of the old company’s history one locomotive soldiered on its lonely way as the others fell by the wayside. Hesperus kept services rolling from its arrival until the exigencies of World War II meant that it was not to be overhauled but scrapped.

Hesperus started life as a standard Manning Wardle and Company industrial and light railway engine. The second of 28 of that company’s class Q it was structurally very similar to our present Charwelton although with a smaller boiler and 1” smaller cylinders. Emerging from the Boyne Engine Works in November 1876 to the order of the contractors Cropper and Macauley it had many specified minor alterations. The most noticeable of these was a huge valenced cab of the kind used by Manning Wardle for engines destined for tropical climes. Despite this the engine was destined for the less sunny climes of South West Wales where one of the partners, Edward Cropper of Penshurst in Kent, was just building a light railway to his slate quarry at Rosebush, Pembrokeshire. Perhaps she was diverted at the last minute by a failed contract or an immediate business need.

In any event our engine became the second engine of the Narberth Road and Maenclochog Railway a railway of light rails and steep gradients opened under a Board of Trade certificate (an early form of Light Railway order) earlier in 1876. At this stage our Locomotive probably acquired the name Ringing Rock (Maenclochog translated into English). This railway had a varied career. Purchased by the authorised but unbuilt Rosebush and Fishguard Railway in 1878 the line officially closed to public traffic in 1882, although quarry traffic may well have continued. During the closure period it became the North Pembrokeshire and Fishguard railway in 1884 and was finally extended to Letterston and reopened in 1895. The Great Western Railway then acquired it in 1898 as part of its grand plans for developing Fishguard Harbour for transatlantic traffic. 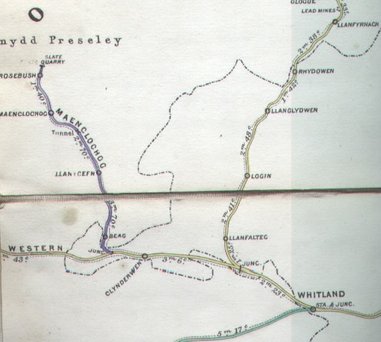 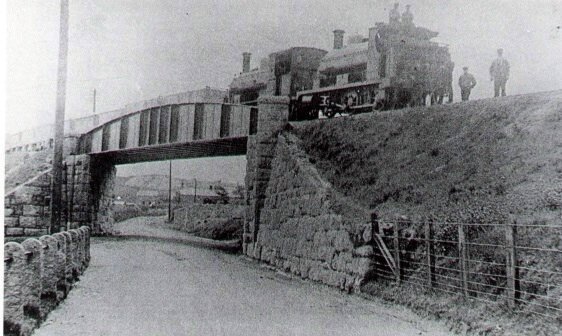 Our engine, with its two companions (one of which has survived to be with us today*), was part of the dubious bag of assets acquired by the Great Western Railway with this near moribund railway. Somewhat surprisingly she was well treated. She was taken in hand in and repaired at Swindon in September 1898 and despatched to the South West of England where small standard gauge engines were in short supply. The GWR had recently taken over the Cornwall Minerals Railway Goonbarrow branch and this had fierce grades and heavy traffic. The branch had its own engine, a standard product of Peckett and Sons (GWR No 1388). However photographs exist of our engine working this branch so she was probably a regular there and was certainly a St Blazey engine in early Edwardian days. 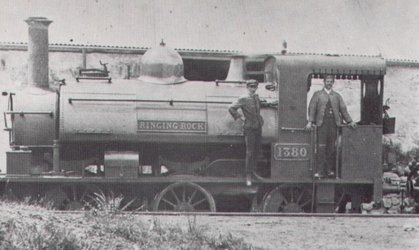 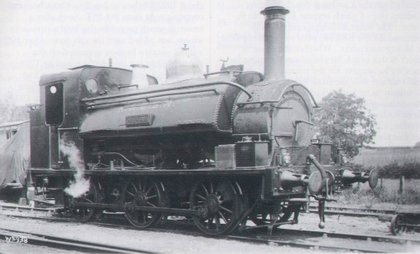 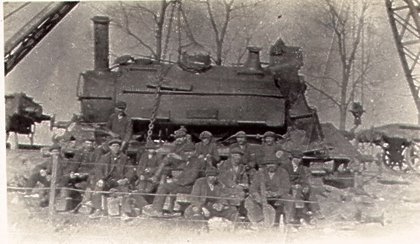 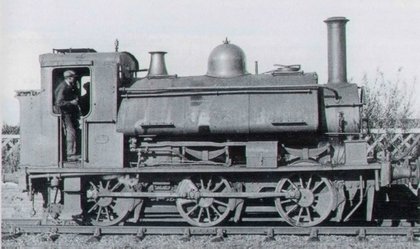 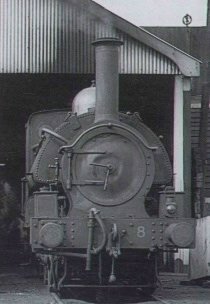 She proved so generally useful that in 1902 she was totally rebuilt almost from the bottom up. She lost many of her standard Manning Wardle fixtures including her characteristic saddle tank and acquired a Great Western standard boiler, saddle tank and wheels. She gained a Great Western chimney complete with copper cap and, of course, the inevitable GW brass safety valve to replace her rather more shapely Manning Wardle example. Somewhat surprisingly however she kept that unusual valenced roof to her cab even when it was shortened to fit the rest of the new bits. At some time during these overhauls she acquired a fine Great Western standard nameplate and the numberplate 1380. Emerging from Works she was now, apart from that odd cab, a small Great Western tank engine of the late Victorian period. New Cylinders and valves installed at her last GW overhaul in 1910 completed the transformation.

Churchward’s great policy of standardisation continued unabated and by 1910 the new 1361 class were available. Useful as she had proved therefore the Great Western sold 1380 to the Bute Works Supply Company, a South Wales engine dealer, in late 1912. On November 27th she turned up at Robertsbridge as the K&ESR’s 8th engine. Her arrival has previously been given in print as 1914, possibly as a result of a paragraph in the Locomotive Magazine, but K&ESR records give both the exact arrival date and record repairs before 1914.

Traffic levels had been building up on the K&ESR since opening. Passenger numbers were to peak in 1913 at 105,000 and goods traffic was not far short of the all-time highs of the mid 1920s. Northiam had departed for the East Kent Railway, the Pickering Steam Railcar was too limited and Hecate was effectively useless. Something more than two Terriers, Ilfracombe Goods and a 2-4-0T were necessary to move the traffic so a new 0-6-0 was a necessity. Stephens obviously had good contacts with the Bute Works Supply Company as he had picked up two ex Great Western engines in 1911. These were the East Kent Railway’s No 1 and a 2-4-0T for the Weston, Clevedon & Portishead Railway that became their No 4 and which in 1917 came to share the name Hesperus with our engine. 1380 was bought from Bute Works Supply for £550 with the aid of a loan from the Lincoln Wagon and Engine Company. She arrived in standard unlined Great Western Green with number and nameplates in situ. Her glorious polished brass dome, safety valves and chimney cap were retained and kept proudly bright until virtually the end. She never carried the K&ESR standard Blue Livery

Although she seems to have run with her original name until at least early 1915, the new tank engine was renamed Hesperus, another of Stephens favourite mythical names. With true economy, the brass “Ringing Rock” nameplates were transferred in due course to another Manning Wardle engine, this time of the smaller K class, acquired by the Colonel personally for use on the Selsey Tram in 1922.

Swindon seems to have miss-managed her last overhaul for she had constant repairs and replacement of motion parts in her early years. By 1916 Hesperus settled down as the third most used locomotive but in February 1918 she was involved in a bad derailment in floods at the Padgham curve between Nothiam and Bodiam. The back of her cab was comprehensively smashed and the valenced canopy met its end here. Then followed a thorough overhaul, no doubt paid for by insurance or the government, which seems to have finally cured her motion problems. In addition he front part of the cab was retained and bore signs of buckled platework to the end of her days. This was married to a very neat matching back and a bunker that bore remarkable similarities to that of a Terrier, although somewhat taller and larger. Its style and practicability was a tribute to Rolvenden Works and served as a model for Bodiam’s l930s rebuild which gave her the unique bunker she still carries. She emerged from works in January 1920 with a cast plate denoting ownership on her cabside and the proud letters K&ESR painted above her nameplate

After this drama Hesperus settled down to a routine that she had probably not known before. The passage of time was naturally marked by subtle changes in appearance. By 1923 she had lost 2 of her 3 coal rails on the bunker then in about 1923/24, and at later brief indeterminate periods, she ran without her rear coupling rods as an 0-4-2ST. Soon after a rainstrip which probably also held a curtain in winter, was added over the cab door. After 1925 a small wooden toolbox appeared on the running plate but that disappeared by 1928 in favour of a Great Western toolbox that had probably been misplaced after the Padgham derailment. After being briefly joined in 1933/34 by a large bottle jack this toolbox disappeared again in 1937.

Overhauls are thought to have taken place in 1925, when she is believed to have been repainted in the same style as before, and in 1933 when the change was more dramatic. Hesperus had a full repaint in a new livery of mid green with white or cream lining, panelled in black. At the same time she lost her nameplate probably as part of W H Austen’s general policy. Instead she was for the first time given her number 8 on the bunker side and on the buffer beams. The company initials were painted over the area where the nameplate had been and although the paint in this area proved unstable and the initials were wearing off by the next year this basic livery was to be her last. In true Rolvenden tradition the nameplates proved more durable. They joined her 1380 plates in store and passed at nationalisation to British Railways and thence to the National Railway Museum. One nameplate is on display in the Colonel Stephens Railway Museum.

Working day-in, day-out on the K&ESR Hesperus was rated for the same loads as a Terrier and even in the mid-1930s it was the mainstay of the Headcorn services. She obviously proved completely reliable and useful. Even her overhaul periods were very brief by light railway standards. However on 28th December 1937 she was stopped for repairs and only ran for 16 more days over the next two years looking increasingly scruffy and uncared for. She finally came out of traffic on 17th March 1939 and was set aside in the loco shed for overhaul. This never came and she succumbed to the general scrap drive on the railway in 1941.

So ended the career of a smart and useful little Victorian tank locomotive that had faithfully roamed odd corners of our railway system for nearly seventy years.

*This was O-6-0ST Margaret, a Fox Walker of Bristol built engine Number 410 0f 1878. Bearing GWR No 1378 she was sold to the Gwendraeth Valleys Railway passing back briefly to the GWR at grouping then 3 months later going to Kidwelly Tinplate Works. She worked there till the works closed in 1941 slumbering then in a shed until 1974, before passing to Scolton Manor Museum, Pembrokeshire

Thanks also to John Miller, Curator, for his help and guidance