After a prolonged period of negotiation the abandoned Potteries, Shrewsbury and North Wales Railway line was reconstructed in a very short period of time to become known as the Shropshire and Montgomeryshire. The contractors, who were both to reconstruct and equip the line, are named in both companies’ minutes as Holman F Stephens and his legal associate F G Mathews and they were paid accordingly with shares and Debentures. They in turn passed these on to a mysterious company, apparently formed specially for the purpose of providing the necessary finance, called the Severn Syndicate whose address was the same as that of Mathews’ firm. The actual work was said to have been intended to be carried out by William Rigby, a well-established contractor, who was also for many years Chairman of the Railway Company, but it is as likely to have actually been carried out by direct labour under Stephens’ direction.

The rebuilding of the line involved substantial clearance, rebuilding culverts and bridges and replacing all the sleepers and some rail of the old system. Most of the work was done by hand with very little machinery but Stephens bought in the famous Gazelle as a lightweight inspection locomotive for use over the appalling track and two engines to cope with the incoming materials trains. The first of these, an 0-6-0 saddle tank, was photographed several times but has defied identification. Indeed it has been most often misidentified as a later arrival that was also used on construction work, the Manning Wardle saddle tank that was soon to become the S&MR’s locomotive No 4 Morous, Manning Wardle (MW 178/1866).

This first contractor’s engine was featured in an early photo, probably taken by F E Fox-Davies, and was published as a postcard headed 'Llanymynech Stations from Old Railway'.

On a copy in the National Archive is noted, in a hand that may well be that of the indefatigable enthusiast, T R Perkins, ' The loco is a 0-6-0 saddletank used during the reconstruction at the commencement of the work [of reconstructing the Shropshire and Montgomeryshire].' The inscription is undoubtedly correct. Reconstruction of the Shropshire Railways [sic] (the company that took over the assets of the old Potteries, Shrewsbury and North Wales), to be operated by the Shropshire and Montgomeryshire Light Railway, was undertaken from the Llanymynech end commencing in summer, probably September, 1910, because access to the Shrewsbury end was initially blocked by the LNWR and GWR companies. 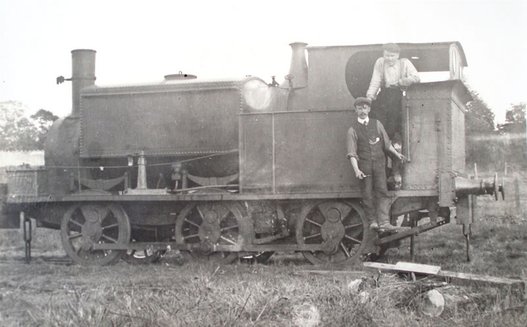 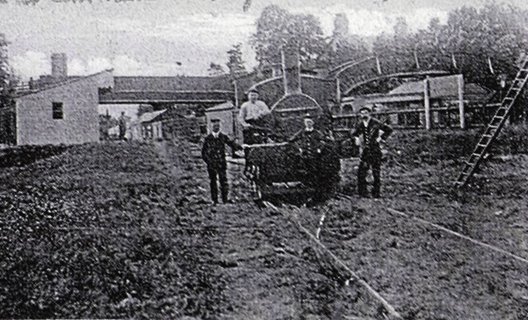 The locomotive featured was reported in the contemporary press (probably as reported by T R Perkins) as of Manning, Wardle design and Eric Tonks, the first chronicler of the SMR, repeats this. The precise identity of the Locomotive, which seems to have been brought in solely for the reconstruction, has however never been firmly established. However recent exchanges between the author Peter Witt and Don Townsley of the Industrial Locomotive Society have narrowed down the possibilities.

On photographic inspection the locomotive bears all the hallmarks of a very early engine built by the Hunslet Company, built at a time when there were many similarities between Manning Wardle and Hunslet products, and there are sufficient differences of bunker side sheets and safety valve cover to be able to establish this. The forward cab side sheets were similar to MW and both companies perpetuated the jointed side and front panels for many years. On the Hunslets the rear bunker was higher and the hand rail was on the side of the panel not the front. Another distinctive feature is the footstep. On the initial Hunslet designs the back was made up of two curved pieces joined in the middle. Until 1887 MW used what looks almost like a bent over shovel (rather appropriate for a contractor's loco). By 1870 Hunslet's were using a more modern style of saddletank with the sides and top in one piece so it must have been built earlier than that. The locomotive appears to have a hinged chimney to pass under very low structures that was offered as a Hunslet option.and appeared only on Hunslet works numbers 6-8 and this mislead researches until it was realised that these were also built with Naylor safety valves which could not be contained in the mystery locomotives brass safety valve cover. They have therefore been ruled out.

Closer examination of the chimney reveals that it is probably not a hinged chimney but a lamp bracket affixed half way up . The stove pipe chimney is a standard Hunslet product which was used from 1867 to 1870. The drawing for this chimney is shown in the Hunslet drawing list as drawing no. 233 and originally done for stock order number 58 which covered engines numbers 19 and 20.

But neither of these is our mystery loco for the handrail on the cab fence on them straight from the top beading to the footplate with the fence plate edge straight and parallel to it. However order no 68 (taken out after no 58 for engines 19 and 20) was actually used to produce engines nos 15 and 16 and it is reasonable to assume that the new style chimney was used on these two locomotives also thereby producing two examples which would match exactly with our mystery loco except for the cab. This last item was a local afterthought anyway.

No 16 to Easton Gibb at Cardiff on 28 March 1867.and is listed as scrapped or sold after at Emlyn Colliery after May 1902. No 15 named Marguerite went to Nailstone Colliery on 11 March 1867 15 is listed as either leaving Nailstone date unknown for nearby Ellistown or leaving Nailstone around 1911 for Kegworth Gypsum Mines but confusing reports also suggest that the Kegworth loco was a Henry Hughes Machine. It is therefore definitely a possibility that 15 was on the move c/1910-11 and it has too many similarities to be ignored.

Just to add further mysteries the S&MLR locomotive Hecate ( later Severn) came from a Mr. R. Hartley,and when purchased she was standing (it does not say that it had worked ) at the Griff Colliery, near Nuneaton . The author has long speculated that this was was incorrect . Stephens' himself was clearly the source of this story and he was given to inaccuracy on the origins and dates of his Locomotives . It may be that he mixed up the origins of Hecate and the Hunslet. If so Griff seems suspiciously near Nailstone and Ellistown making HE15 a top candidate .

If it was Hunslet No. 15, on the superficial evidence of a photograph in Tonk’s SMR booklet, in Tonks' book of the locomotive on a LNWR low loader in Meole Brace interchange yard) would have left after 22 May 1911 and probably after the completion of the Criggion Branch reconstruction in February 1912 .It left to an unknown destination but may have gone to Ellistown or Kegworth .

But just to add another red herring to this tale of the unknown, recently a photograph taken by R W Kidner at Criggion Quarry in 1930 appeared in the journal of the Colonel Stephens Society showing tantalising evidence of a boiler from this type of locomotive – a type that never worked there. Was the locomotive simply left on site to service the quarry or be left derelict on the last constructed part of the S&M?

We would welcome readers considered views on the actual identity of this engine and its history.