The high ideals of the light railway movement in the 1890s envisaged new locomotives and carriages. The Colonel always looked to Hawthorne Leslie to build new engines whenever funds were available but this was not often possible.  Second-hand locomotives became the only option.  Stephens' first choice was William Stroudley's A1, the 'Terrier'.  The London and Brighton South Coast had decided in 1898 that these engines were too small. They were nevertheless of great utility to light railways and contractors and Stephens was in the queue.  Number 3, Bodiam, was his first purchase and eight more were to follow between 1901 and 1937.  With the success of the Terrier powered rail motor on its home railway from 1905 onwards availability became erratic. Tank engines also had limited coal and water supplies and lengthening light railway routes called for tender engines.  Stephens cast around and found another ideal locomotive – the Ilfracombe Goods.

These small tender engines had their origins in an earlier wave of enthusiasm for light railways in the 1870s based on the provisions of the Regulation of Railways Act 1868.  Ilfracombe was seeking to further develop itself as a resort and the London and South Western Railway constructed the lightest of railways for opening in 1874.  Their loco department was at that time in the charge of the incompetent William George Beattie and the Board made him seek the advice of the highly competent independent locomotive builder, Beyer Peacock.

This company had developed close connections with the South Western since the days of Beattie's father and had built many locomotives for them. They offered an existing design of locomotive they had first built for Sweden in 1866; 0-6-0s with sloping smokeboxes, domes over the firebox and four-wheel tenders to the following general specifications.

They were typical fine Beyer products of the period that proved able to run on the lightweight rails and 1-in-36 gradients with a respectable load.   Three engines arrived in 1873 and proved so generally useful that options were exercised for another two with a further one for the new Sidmouth Branch in 1874. Two more, slightly larger, followed in 1880. These engines also worked on goods, carriage pilot and banking duties around Exeter.

In the early 1880s, after William Adams had restored order to LSWR loco affairs, these useful locos came under his gaze and were subject to his standardisation policy.  The first six engines were reboilered in 1888/89 receiving new cylinders, Adams cabs and chimneys and second-hand six-wheeled Beattie tenders.  This produced a truly charming, typically late Victorian small mixed traffic (before the term came into use) engine with a boiler standard with Adams's 02s, G6s and rebuilt Beattie 2-4-0 well tanks. 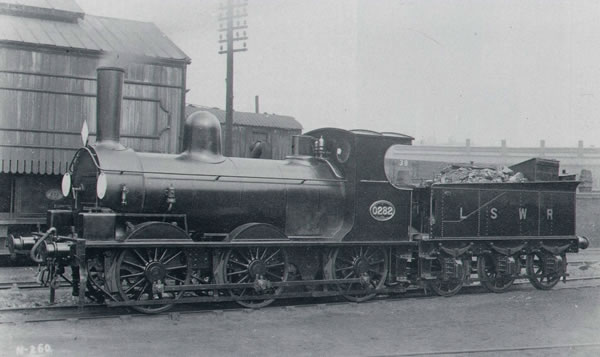 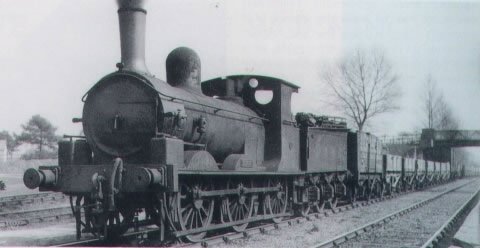 By the 1890's the Ilfracombe Goods reign in the West was coming to an end.  Their home lines were rebuilt to heavier standards and five including the two unrebuilt examples moved to London and Bournemouth. However they were, like the Terriers, becoming too small for duties in the 20th century. Two were scrapped in 1905, the remainder being laid aside in 1909-1913, a period which coincided with Stephens' search for motive power.  They all ended up on the Colonel's railways.

The first purchase was initiated in 1910 when Dougald Drummond was approached for the sale of a light tender engine and he was offered No 0349 for £700 including repainting and delivery. This became KESR's No 7 Rother and was delivered to Rolvenden on 6th May 1910 although the purchase date was recorded by the LSWR as 14 May following a decision to sell in April.

Rother proved so successful that two more were sought in 1914. As usual cash was not available for purchase so a form of what later came to be called hire purchase was used; the LSWR arranged that the two should be hired at £110 each per annum for five years with an option for purchase at 10 shillings at the end of the period.  Bradley notes they were dispatched in May still in LSWR livery and with plates showing that they were that Company's property that was not to be removed from the KESR. A copy of the contract has however survived and actually allows Stephens to use the locomotives on other lines. Other recorded facts also depart from Bradley's account. LSWR records show the sale as June and the K&ESR rolling stock register records that No 0284 came onto the KESR on 3rd December 1914 as No 9 Juno. The second locomotive, 0300, definitely went to the Shropshire and Montgomeryshire although S&MLR records record it arriving in November. It is possible that they were dealayed to be overhauled or repainted (probably in LSWR livery)  by the LSWR  before despatch. No 5 Pyramus was reportedly painted, numbered and named as an S&MLR engine by May 1915 as although the date of naming is questionable. The cost of both is recorded as £600 by the LSWR .although the hire purchase terms were 5years at £110 per year each.

On the Kent and East Sussex Rother and Juno took on most of the mixed train mileage during the 1920s.  Rother ran 73,816 miles between March 1922 and October 1932 when it was laid aside.  Juno ran regularly until 1932 but then worked only spasmodically until 1935.  Both engines were sold for scrap in September 1940.

After the success of Rother Stephens had quickly bought his second Ilfracombe Goods, this time for the Shropshire and Montgomeryshire.  It became No 3 Hesperus in February 1911 although LSWR records give a January sale and March withdrawal.  Stephens had been able to order two of his favourite Hawthorne Leslie tanks for the opening of this line but but financing problems seem to have delayed their delivery. Whatever the case Hesperus pulled the inaugural train and Stephens sought another.  He could not however afford two. This failure may have precipitated the purchase of the antediluvian 0-4-2T (SMR's Hecate later Severn) and the barely adequate Manning Wardle saddle tank Morous in the same year. Hesperus soldiered on in motley company until Pyramus arrived as outlined above.  With the First World War at its height, another arrived on hire purchase in 1916, this time the hire period was for a year at £285 after which there was an option of purchase for £400 (half deferred for yet another year). The sale month here is very confused for the LSWR agrred on 30 March to sell the engine  to the K&ESR but were advised in May that it was actually sold to the S&MR . In the event the Government, which was controlling the railways during the war, was persuaded to fork out for early purchase in April 1917.  It became the second Thisbe (No 6) and was recorded as so named and delivered from the LSWR . As with their two KESR sisters the three engines were, with the later Railcars, the backbone of services particularly as the SMR Terriers appear to have been under used . Hesperus was out of commission between 1928 and 1934 but was reinstated and supplemented the Coal engines until 1939 before being broken up in October 1941.

Pyramus ran till 1930 when it bequeathed its boiler to Thisbe, which in turn was withdrawn in 1934 and scrapped in 1937.

The final Stephens' purchase was the unrebuilt 394 which was sold on hire purcahse  for the East Kent Railway on 1st August 1918 for working that Company's rather thin passenger services. The price was £200 per year for five years payable at £16 13s 4d per month.  Again, however, the Government was inveigled into providing purchase money and it became EKR property for £1000 shortly afterwards.  As their No 3 it ran regularly until late 1930

The Ilfracombe Goods were clearly great favorites on all the lines throughout the 1920s but minimal finance and Austin's increasing influence and careful management led to their downfall. Austin had excellent contacts with the Southern Railway and his deal on Hecate bought the KESR its No 4, a so-called 'Beattie saddle tank' (actually another standard Beyer Peacock product and a near relative of the llfracombes.) However at this time spare boilers for the 02s were lacking and the Southern could not provide cheap replacement boilers for the Ilfracomes even if they wanted.  Continuous work since their purchase had worn them all out.  From around 1930 they were laid aside. The KESR struggled on with whatever could be made to turn a wheel and hired engines as necessary and the SMR bought 3 Webb Coal engines from Crewe to fill the gap on their main line.  The Ilfracombe Goods had no place.  The final clearing up of the 1930s and the earlier War Years swept these once favoured engines from the face of the Stephens railway.

Am I alone in regretting the loss of these neat and practical engines?  They were the essence of the KESR and SMR operations in their heyday before lost business, lighter loads and lack of spares forced them out of traffic. What would a new Juno, an 02 boiler married to a pannier cylinder block in a new chassis, do with a four-coach train on Tenterden bank. A child's play mile of 1 in 50 relative to the two mile 1 in 36 pull out of Ilfracombe that was their birthright. We can only dream.

This article was only possible through the detailed researches into the locomotive history of the London South Western Railway by the late D L Bradley to which due acknowledgement is given.