Coal Engines of the S&MR

The London & North Western Railway was into standardisation in a big way from its earliest days. In Ramsbottom and Webb's day truly huge numbers of the simplest engines were constructed. Starting with 857 DX goods produced between 1858 and 1874 these were developed into the 230 ‘Special tanks’ with saddle tanks and smaller cast iron wheels. Then in 1873 the tank went and with a tender added they became the 500 ‘Coal Engines ‘and finally in 1881 their tank equivalent the 300 ‘Coal tank’ 0-6-2 T s. That great student of locomotive design E L Ahrons described the ’Coal Engines’, without undue exaggeration, as ‘probably the simplest and cheapest locomotives ever made in this country’. As built the coal engines had no brake on the engine itself but prudence ultimately overcame parsimony, at least in part, and steam brakes were fitted, but with only one cylinder for both engine and tender rather than the more normal one each.

From February 1873 to November 1882, Crewe built 400, and added another 100 in 1889-92. When Whale succeeded Webb he rebuilt 45 into square-top saddle-tank shunters. Normal withdrawal had started in March 1901 and in 1902/4 two were sold to the Manchester & Milford Railway. By the end of 1912 the total was down to 303, and in July 1917 another 85 were sent to the Railway Operating Division for war service overseas. In June 1919 the Government bought and kept 42 of them and a further 34 withdrawals in the years 1913-22 led to there being 227 to hand over to the LMS: they were allocated numbers 8088 to 8314. Withdrawals began again in April 1924. By then, all were at least 30 years old, 19 of them having worked for 50 years. Just how robust this design was is typified by the first one built, which served the LNW, then the LMS, and also British Railways for no less than 80 years. It only failed by two months to be 'Last of Class' as well as the first. All tenders seem to have been Webb type which had wooden frames, those of 1800 gallon capacity being in the majority. 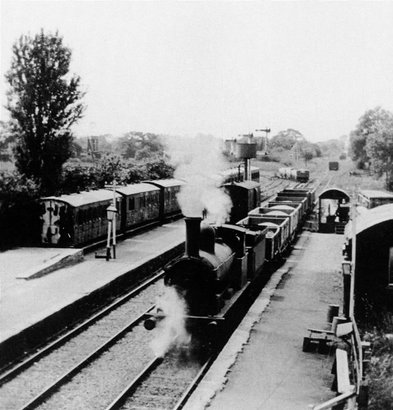 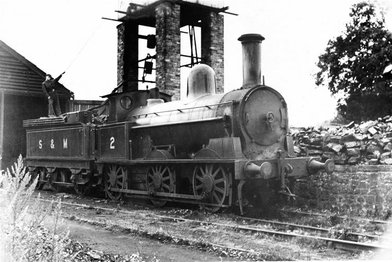 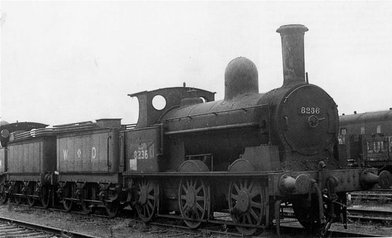 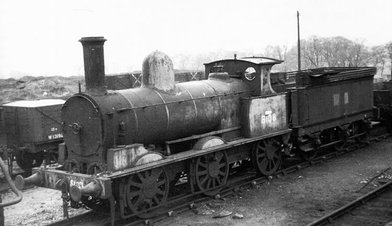 By 1930 the S&MLR was experiencing a surge of mineral traffic as a contract had been landed by Roads Reconstruction Ltd, the owner of Criggion Quarries, to supply roadstone for the construction of the East Lancs Road (a 1930s new road precursor of a motorway). The 3 Ilfracombe goods engines had been the mainstay of the railway almost from its inception and now needed to be supplemented or replaced. Austen (Stephens being by now very ill) turned to the LMS for replacement; possibly as new S&MLR directors John Pike and James Ramsey, both ex LMS officers, had good contacts. The Locomotive of 15 March 1930 reported the purchase of the first Coal Engine from the LMS (No 8108) which means this had probably been available since that February.

Austen’s search for a second engine proved difficult. He had contacted the LMS and been offered two Webb Coal Engines for £420 and £390 but reported in January 1931 that they were in too poor a condition. By March he had inspected four more but only one (No 8182 at Sutton Oak) was any good. This incidentally shows how low LMS maintenance standards had sunk in the Depression, and pre-Stanier years. The loco was bought for £380 and was in use by May.

When they first arrived the coal engines could not be used on the Criggion branch, so the very heavy quarry traffic of 1930 and early 1931 was handled by the remaining operational Ilfracombes, No 3 Hesperus and No 6 Thisbe, with re-marshalling at Kinnerley. One of the Coal Engines was successfully trialled on the Criggion branch on 28 June 1931 following considerable renewal of the permanent way in that year and Austen then cleared the class for use on the line. This was just as well as in that year roadstone traffic peaked at 145,472 tons, well over twice the 1920s best figures.

This route clearance seems to have prompted the search for another of the class to replace one of the Ilfracombes and there were reports in April 1932 of the continuing search for a suitable engine. Finally on 21 June 1932 No 8236 was purchased for £375 after receiving a new tube plate. Although traffic was now well past its peak, this engine’s arrival was propitious as both of the earlier engines now required retubing. Boilers were clearly a weakness of these purchases as both 8108 and 8182 received new tube plates in November 1935 and August 1936 respectively. Indeed 8236 only lasted 3 years before receiving a new firebox in June 1935. Fortunately Crewe was relatively near and the LMS had plenty of spares so the work was done there.

With the Depression deepening, and road work never recovering even during WW2 (when road renewal was not regarded as a priority), roadstone traffic slumped without recovery. The collapse of this traffic in 1933 was the real reason for the economic crisis of 1933 that caused the calling-in of a receiver in March and the closure to normal passenger traffic later in the same year. There was an irony in this in that the three S&MLR coal engines were the only ones amongst their numerous brethren that were equipped with vacuum brakes and steam heat! Not many passengers benefited, at least until the army moved in.

A visitor to the S&MLR on Tuesday 18 May 1937 reported that all three Coal Engines were on shed at Kinnerley: No.8182 was in steam; No.8236 was undergoing light repairs; while No.8108 was reported to be '...in store, apparently being used as a source of spares'. However, by June 1938 No.8108 was undergoing a heavy overhaul. The wheels had been re-turned at Crewe and other work was underway with the limited resources to hand. She  returned to traffic in July 1939 painted olive green with black and white lining and rechristened No.2, with 'S & M' inscribed in white on the sides of her tender. It was stated that the S&MLR's other two Coal Engines were to be similarly painted and indeed their new S&MLR numbers had been allotted: Nos 4 (8182) and 5 (8236). This was not to be, for when the army took over the operation of the S&MLR the engines (which were loaned, not owned, by the army) needed unique four figure ROD numbers and reverted to, or retained, their LMS identities as their ROD number.

S&MLR actives had reached a new low after the outbreak of war. The S&MLR was formally taken under the Control of the Government on 1 September 1939 but was instructed to carry on as normal, and did so. With the rundown of traffic due to the war, the Board had in June 1940 decided to close the Kinnerley–Moele Brace section. However, before this happened the War Department approached them in December 1940 with a view to taking over the line to serve war storage facilities that were to be built in the adjacent countryside. With the run-down the coal engines had been allowed to get into poor condition and at takeover the WD reported in February 1941 that, although 8182 had been prepared for transport to Crewe for overhaul, her condition was ‘very bad’. 8236 was reported as ‘generally bad’ and No2 was ‘serviceable’ but with a ‘condemned’ boiler. No wonder one fitter reminiscing in the Railway World in 1960 remembered the latter as ‘about as run down as could be, and was hardly fit to bake chestnuts.’

The Army were desperately short of suitable engines so two coal engines were loaned from the LMS; one, 28204, had arrived on the S&M by 26th June, 1941 and was to  remain on hire until  12th July, 1945. The S&MLR trio were promptly despatched to Crewe and received heavy overhauls: 8236 and 8182 in March, 8108 in June. Even then there were problems, 8108 was in trouble throughout 1942 ,out of use in January and February and at 5th Mobile workshops in July, she finally had to have heavy repairs to her tender at Crewe in October /November. All three required heavy army overhauls by the 4th Mobile Workshops in 1943 and were dealt with in rotation ; 8182 in March to April, 8108 April to May and 8236 in June to July. 8108,ever the weak one, was attended  to by 10th Mobile Workshops in February to April 1944 returning to work on the 21st May. In December 1944 8236 received a further general overhaul at Crewe to keep her going, followed by 8108 in February  to May and 8182 in June to August 1945.

No youngsters, all the engines doing up to 2,000 miles a month and they were showing their age. With work winding down it was even possible to lay up the troublesome 8108 in September and October 1945. By 1946 their time was coming to a close. 8236 had been out of use since July 1945, swapping her good tender in January 1946 with 8108 which had damaged hers and was She sent to Crewe for overhaul again in August 1946. On 16th September the boiler was reported uneconomic to repair and she returned for store on 27th September . After having been out of use since July, 8182 was stopped for good with a leaking firebox foundation ring in the same month. Oddly  8108 ,of all engines, having been out of use from June to September, having been again at Crewe and being returned on 14th August proved the last S&MLR engine to work . But she did not last long being finally failed in traffic on 15th November with a cracked firebox. With the end of the war the ROD had plenty of their Dean goods available, and when the line was upgraded in the following year even these gave way to Austerity Tanks. So the trio were left in the sidings at Hookagate to await their owner’s pleasure.

Their fate now becomes simply a tale of bureaucratic confusion. On 8 March 1949 they were taken 'dead' to Wolverhampton Works for the S&MLR had fallen into the hands of its old enemy the GWR (in the thinly disguised form of the Western Region of British Railways) on 1 January 1948 they were apparently taken there nominally 'for attention'. In truth, the Western could never have wished to be lumbered with three ex LMS Coal Engines and no foreign engine ever survived long in Swindon’s sphere of influence.

Also, a few of their sisters were still hanging around in odd corners of the former LNWR system until 1953. In August 1949 enquiries were made to see if they might be sent to Crewe for breaking up - a very sensible and pragmatic arrangement. This cross regional correspondence brought HQ intervention and they decreed that the three Coal Engines (with the surviving Gazelle – still at Kinnerley) were formally Western Region stock to be dealt with by them. Correspondence at no less than Chief Regional Officer level finally led to a formally recorded decision on 22 May 1950.They were finally towed away from Wolverhampton to Swindon Works arriving on 9 August. They were placed on the Dump to await cutting up, and dealt with during the week ending 4 November.

So ended the careers of what were amongst most overlooked but last surviving engines from Stephens’ lines. Perhaps they were too common on the mainline to get their fair share of attention by enthusiasts. Also they were acquisitions that marked the change from the more romantic era of Stephens to that of the ever pragmatic Austen. He was not only ready to acquire cheap engines of a common type but also to hire in engines from the mainline companies. Normally Stephens did not tolerate his engines roaming around with another company's number – his had his numbers and, preferably, a name. Perhaps we would remember them better if they had arrived a few years earlier when Stephens was still alive.

*These are the dates of arrival. Official sale dates on the books of the LMS are one month later due to recording delays and statistical recording periods.